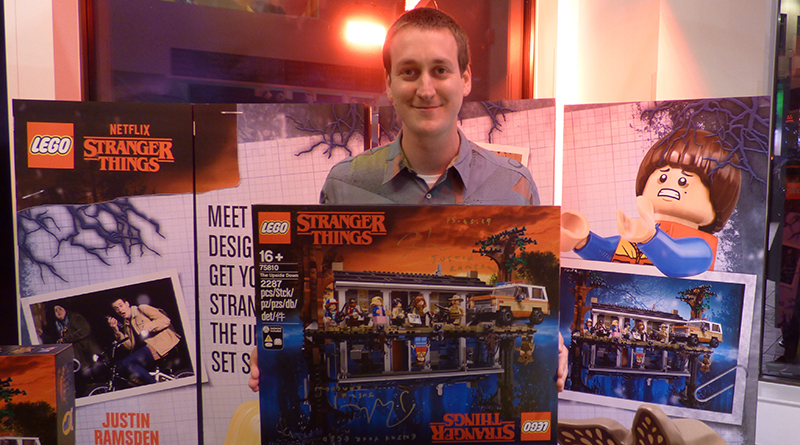 One of the biggest Stranger Things fans is LEGO Senior Model Designer Justin Ramsden, who shares some of the secrets behind designing 75810 The Upside Down with Brick Fanatics

LEGO Senior Model Designer Justin Ramsden is a huge fan of Stranger Things and was delighted to be working on the brand new set, 75810 The Upside Down. In this exclusive conversation with Brick Fanatics, he highlights some of the references included in the model, discusses the minifigure selection process and reveals his favourite LEGO television commercial experience.

Read more of Justin’s thoughts on designing the set, including the challenge of finding a way to represent the Upside Down

What Stranger Things references and Easter eggs did you include in the set?

Like any of my sets, I have tried to cram as much goodness in as possible. The fact that you build it – I don’t know if you would call it upside down or right side up – is one big Easter egg. The fact I have managed to split up the building instructions so it is a right side up and upside down book.
Also the colours of the filler bricks inside the model, so when you are building a model it is not just grey, grey, grey, we put different colours in. For instance red in the right side up, would become dark red in the Upside Down, so there are little bricks that you can have fun with.

There’s nods to the show and the universe, like a poster with a reference to a famous shark related film that is in Will’s bedroom. We have managed to put stuff like the ‘Missing Barb’ poster on the tree, there is a rulebook for a famous board game. Everything is related to pop culture as well, so Hopper’s truck can be seen in a shark related film, the way Eleven is dressed references an alien film that came out in the 1980s. Everything has those nods and that is really nice.

Stranger Things is just a smorgasbord of nostalgia and I think that is what I wanted to portray in the LEGO set, just cram it full of all these details and all the nitty bitty bits that all fans know and love from the series.

Definitely, I did the same with the camcorder as well, that was big in Season 2 so it was nice to bring that element back.

It has been great as well in the run-up to this set to even recreate old commercials, it is funny I showed the commercial that is out online now, ‘welcome to LEGOLAND Town’, at last week’s Inside Tour and people just went ‘oh, you’ve brought this set back, that’s amazing, I can’t wait to get my hands on it’ – the cheese grater only came out in 2008! It has been so much fun to delve back into the 80s, even though I wasn’t alive then… but I have seen pictures of it.

The Behind the Brick video is a lot of fun.

It was one of the best TV commercials I have been on, I am coming up nearly 20 commercials now. I get to work as a toy doctor, which is one of those things people don’t realise exists at LEGO. The toy doctor makes sure all the bricks are pressed together and everything is dusted and perfect. So to go on set and just be asked, ‘oh, can you help out with this?’ was so much fun. It was good to dress up.

Was it hard narrowing down the character selection for the set?

That is the beauty of the show, it was really hard to narrow it down. We were lucky enough to work with Netflix to decide which characters are relevant, for the scene. We also got the chance to create three new elements for the set as well, they are head gear for the Demogorgon, a hair piece for Dustin and also the hair for Will. It is fantastic to bring newness into the LEGO assortment and stuff that just really nails the characters’ aesthetics, it is really great.

What stands out as the highlight of working on this particular set?

Just working with such a big franchise from the Netflix assortment. When I saw the first episode of the show I was blown away, and I was hooked ever since. To combine that with LEGO is just phenomenal. I always have these things that I call ‘jaw dropping moments at LEGO’, and every day I am told something that makes my jaw drop. So LEGO’s going to team up with the Beatles and release the Yellow Submarine, ‘no way that’s going to happen’, you get to work on the next Batmobile, ‘no way’, so one day I think my head will literally explode just because there has been so much awesomeness.

So you were as surprised as the fans were when you heard this was going to happen?

Oh definitely, yeah. It is incredible that we can do this, and add this fantastic universe into the LEGO assortment and make sure that it taps into new worlds that LEGO fans might have never been before, or new fans to LEGO can explore it – if you are a fan of the show then come and build this set.