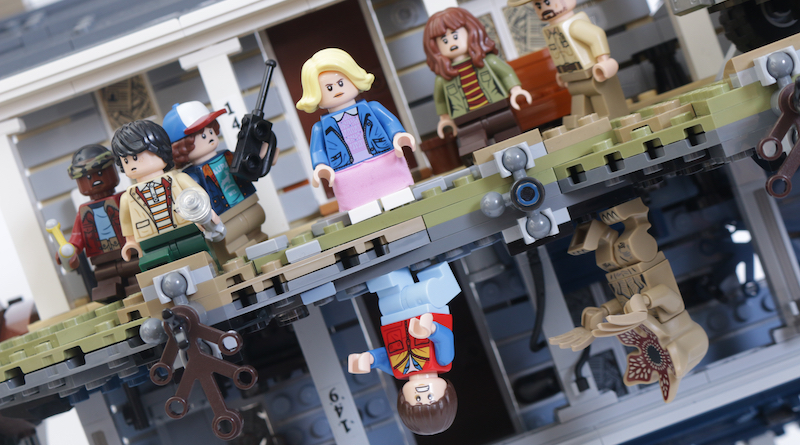 LEGO Stranger Things is real and, in the form of 75810 The Upside Down, truly a LEGO set like no other

It is fair to say that writing LEGO and Stranger Things together is an unusual and certainly unexpected collaboration. Ever since rumours (first reported on brickfanatics.com) emerged that the family-friendly, values-centric Danes would be converting a 1980s-inspired, Netflix horror franchise into LEGO, it was easier to laugh off as, at best, wishful thinking. 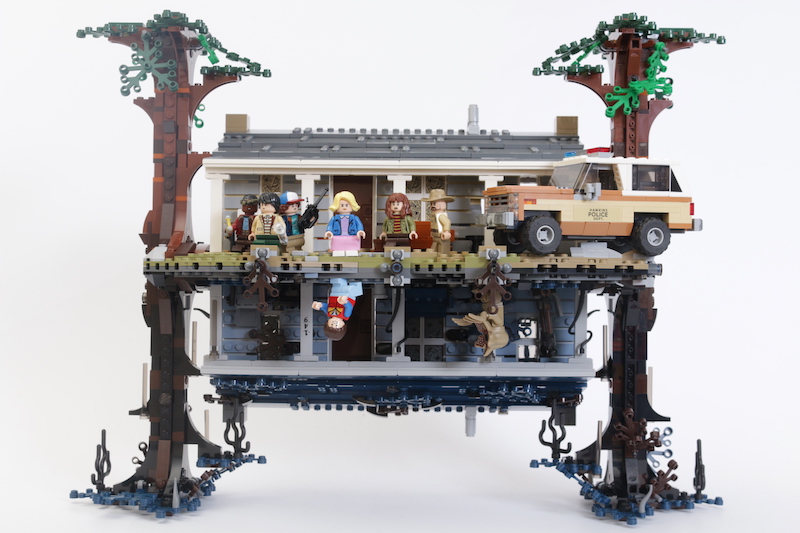 But for fans of the show that enters its third season this year, it is wish fulfillment, and just the latest nostalgia-geared, adult-targeted license to make the leap into LEGO, and, this time, at a considerable size. Indeed, perhaps without the advent of the Ideas and Dimensions programs and their penchant for one-off-leftfield-licenses, and the advancement of the Creator Expert and direct-to-consumer sets’ large scale concepts, LEGO Stranger Things would’ve remained only as a ludicrous and oversized ‘what if’ explored by fan builders and minifigure customisers.

Yet, here we are, in 2019, in a world where Tron, The Beatles, Voltron, Steamboat Willie and The Flintstones are all in official LEGO form, now welcoming a set with a minifigure Eleven in it, Winona Ryder in brick form, and graphic design and build details that reference Jaws, Dungeons & Dragons and even at a more subtle level The Evil Dead. And, following on from the likes of 71040 Disney Castle, 71043 Hogwarts Castle and 70840 Welcome to Apocalypseburg!, 75810 The Upside Down is released as a 2,287-piece behemoth, designed in such an attention-to-detail-fuelled, creatively crazy way. This is a set that not only embraces its adult-orientated, leftfield reference material, but does so in a way that absolutely and quite literally takes LEGO building to a new level.

First things first, yes, 75810 The Upside Down stands up both ways up, and in a surprisingly sturdy manner for a model that otherwise looks like it wants to constantly tip forwards. The build is essentially two mirrored versions of the Byers family home – one representing the ‘real world’ version, one representing a mirrored version in ‘the Upside Down’, the alternate dimension that Will Byers finds himself trapped in during the first season of the show. These two reflected versions of the house are clipped together at their bases with Technic 3 ball steering joints along the front and back, and then most securely fixed into position at either side of the bases by column builds for the trees.

The respective versions of the house feel very delicate in construction, and parts to the base will break off if you aren’t building on a flat surface. For the detail that is packed into each house and dotted all around the exteriors too, you’d be forgiven for thinking this isn’t a set that can survive its core function. Yet, survive it does, and surprisingly well. 75810 The Upside Down can be picked up from almost anywhere and turned upside down without risk of things pinging off or losing clutch power. It is also a build that is deceptively well-balanced to counter a base that stretches out to the front for the most part.

In all, it means that what could have been just a gimmick otherwise not so practical in reality functions perfectly, to represent what is possibly the first of its kind in a LEGO set – how many other truly upside down builds have there been in the past 61 years? This is a heavy, strategically-engineered set that takes building with LEGO to, quite literally, a new level.

Whilst this delivers so perfectly as a LEGO set half upside down, it doesn’t fall short on details and story either. Importantly, when it comes to packing in the references and little creative nods here and there, 75810 The Upside Down ticks a lot of the same boxes that the Netflix show so knowingly does. The Jaws poster and Dungeons & Dragons bits and pieces hidden around reference both 1980s pop culture and the show itself, whilst there are so many recognisable story devices found within the LEGO Byers home. The phone in the kitchen, Will’s bedroom packed with lamps, the papered-up windows, the lemon and white-striped sofa and of course the Christmas lights and letters painted on to the wall – key moments have happened in Stranger Things centred around objects and locations within the Byers home are all here. And cleverly so – how that sofa and the outdoor seat come together are two examples of how sometimes you can build one thing through the creation of something else.

Where the interior is packed with display-and-playability, the exterior cannot be overlooked either for how accurately it recreates the Byers house. The roof’s subtle change in angle midway down is perfectly captured, the sand blue wooden slats, dull chimneys, grassy frontage and the entire front porch are spot on matched with how they appear in the show, right down to the seating out front, including that porch swing… These may sound like dull details to someone wanting to just have their LEGO Eleven flip a truck upside down, but, these are the details that so effectively trick your eye and pull you and your new handheld Eleven into the Stranger Things world.

As a build, there is that moment halfway through where, after finishing the Byers family home, you are faced with…building the Byers family home, again. As frustrating as that is, in what could be the one criticism of the set, there is still fun to be had in putting together the Upside Down version of the house. Everything is back to front and, for those looking to learn from LEGO and develop their own creative building, this is a fascinating exercise in colour and how it can change the appearance of a LEGO build. Alongside a completely new colour palette, subtle changes in pieces here and there, coupled with dark blue and dark brown tree elements cleverly establish the creepy nature of the Upside Down. You will have built the same thing twice, but by the end it won’t feel it, and won’t look it. In build and in finished model, the two versions of the house are familiar, but different.

In so many ways this is a smart build, primarily for what has been included in it and then for how the instructions guide you in recreating it. Stranger Things is a show rated at between 14 and 16, depending on your region, and this will primarily be why the set comes with a 16+ age recommendation on the box. However, it has been taken by the LEGO Group designers as an opportunity to not only tackle the creation of this set in a unique way, but, ensure that your build experience includes some testing, rewarding steps.

The minifigures benefit from the shorter bendable legs, some skillful graphic design on the torsos and faces and some new hair/hat moulds. This collection of characters enhance the final set and fit perfectly within it, to cap off a true transformation from a box of bricks to the world of Stranger Things. Meanwhile, Jim Hopper’s police SUV is more than just a side build, with some novel twists on Studs Not on Top building.

In all, 75810 The Upside Down is not an Ideas set, nor a Creator Expert one. It borrows from both themes’ identities and creates its own indelible mark on the current LEGO roster – this is a detailed, skillful recreation of its source material, offering a new direction for LEGO building. The LEGO Group has been making noises for a while about targeting the older LEGO fan, and this is a pretty solid set to back such sentiments with. It stands to be well received by its target market, but, what that means for its performance as a LEGO set on shelves next to Friends, CITY and Star Wars remains to be seen, particularly given this set’s leanings towards Season 1 of Stranger Things, which is close to three years old. Everything about 75810 The Upside Down feels like new territory – what follows from this point on will be both interesting and, quite honestly, anyone’s guess.

We didn’t anticipate this set, didn’t believe it was coming, but it’s here and now we don’t know what to expect going forward. All bets are off. Could a LEGO Jaws set happen? Should we hope for something based on the next Suicide Squad film? What about some LEGO Aliens? Yes, maybe with a name change, and why not? Stranger things have happened, Stranger Things has happened, and it is amazing.