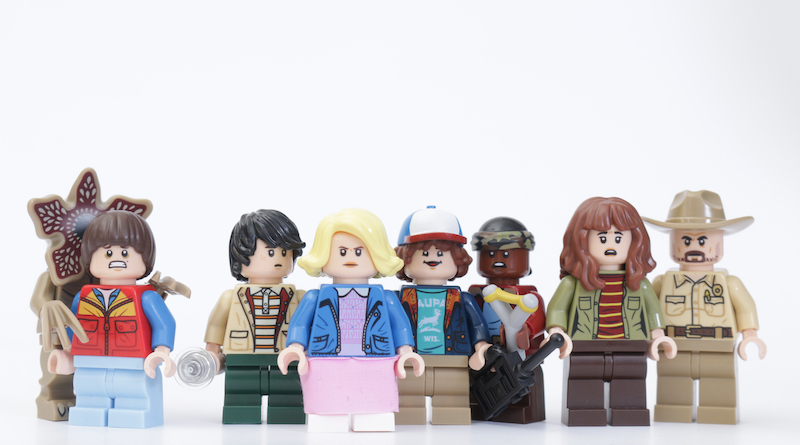 As well as offering a fascinating build and a truly unique final model, 75810 The Upside Down (review) also includes eight exclusive minifigures based on the core characters from Season 1 of Stranger Things – friends Mike, Lucas, Dustin and Will, Will’s mum Joyce and the stoic Hopper, the mysterious Eleven and antagonist the Demogorgon. Each minifigure boasts unique details and creative nods that showcase their character and bring the Netflix show into the LEGO world. 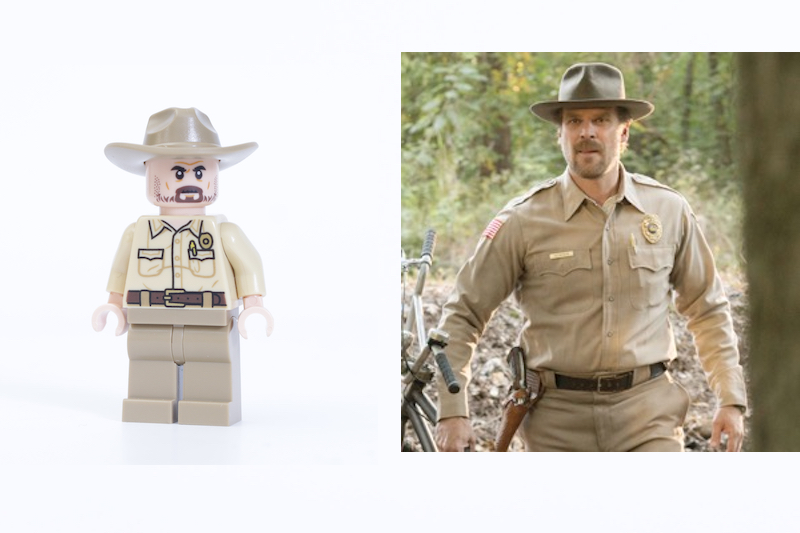 Jim Hopper (David Harbour) is the chief of Hawkins Police Department. Initially, he does not seem like a proactive cop, doubting Joyce’s claims. As the series progresses and the supernatural occurrences become clearer, Hopper realises that something is going on – and that it has something to with the Hawkins Lab.

The minifigure includes Hopper’s hat, which is one of the many movie references the Duffer Brothers included in the series, as it is a nod to Indiana Jones. Fans of Jaws will notice another Spielberg reference, as both his costume and vehicle are very similar to those of Sheriff Brody in the classic 1970s film. 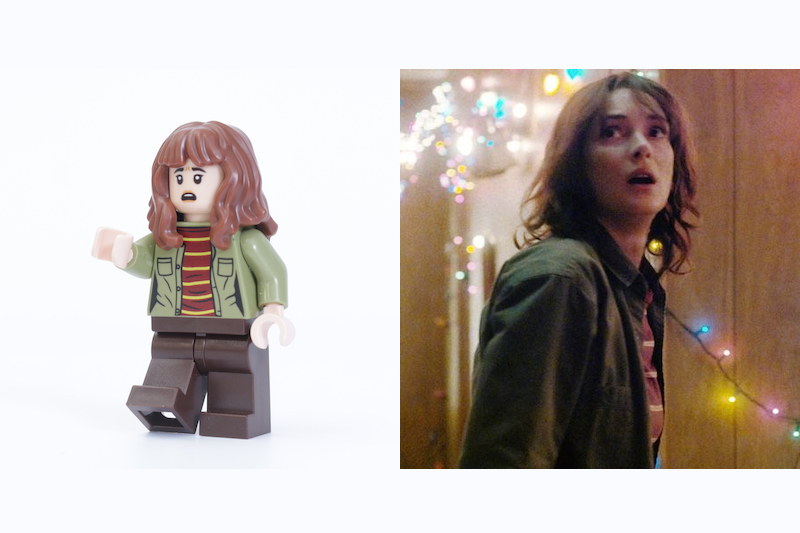 Will’s concerned mother is dismissed by everyone, with those around her believing that she is going insane – especially when her son’s dead body turns up. Joyce is completely vindicated in her belief that Will is alive, which comes from strange telephone calls and then him communicating with her through fairy lights. The Duffer Brothers had been keen to cast Winona Ryder in the role as they were fans of her performances in Edward Scissorhands, Beetlejuice and Little Women.

The hairpiece on Joyce’s minifigure perfectly captures the 1980s throwback do, right down to the fringe with a subtle parting in the centre. 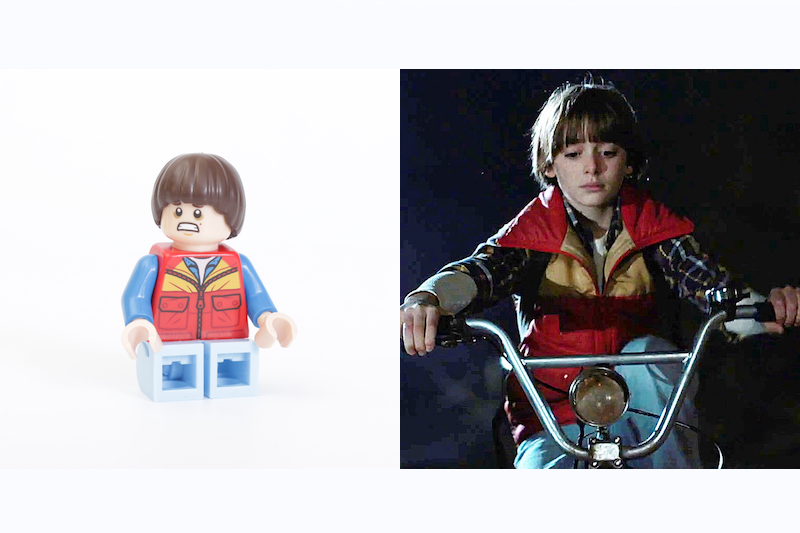 Thank goodness Will’s minifigure has a scared expression, because the poor child will need it. He disappears after an encounter with Demogorgon, and spends the first season trapped in the Upside Down. The very final scene in Season 1 features Will (Noah Schnapp) seeing the Upside Down, but while stood back in his bathroom, which is a reference to the Twin Peaks finale.

The colourful 1980s puffer jacket, complete with zipper down the middle and pockets, makes sure that the Will minifigure fits perfectly with the period in which Stranger Things is set. His ‘mop’ hairpiece also captures his hairstyle well. 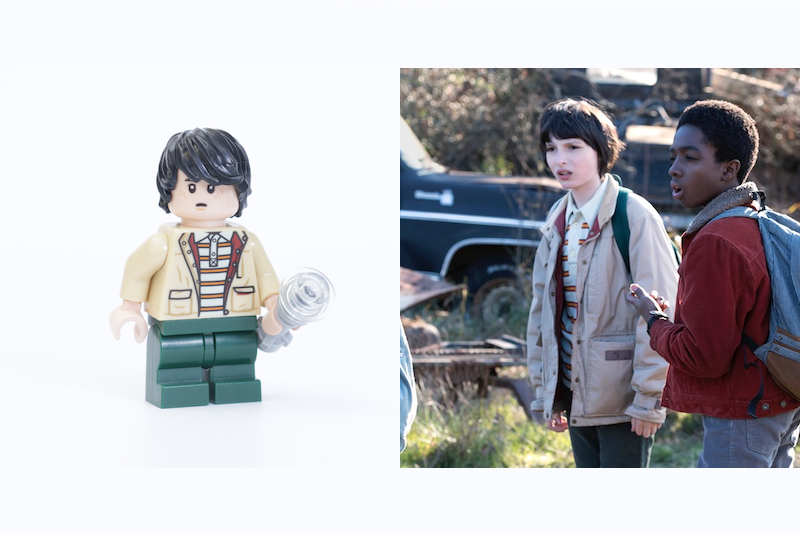 Of the four child leads, Mike (Finn Wolfhard) is the one who rallies his friends. He is determined to help Eleven after they find her in the woods, and will not give up on Will either. When he is riding his bicycle with Eleven on the back, the camerawork pays homage to another classic Spielberg film – E.T. His role in the series is very reminiscent of Elliot’s.

It would have been easy for the LEGO graphic design team to use generic shirt patterns on these minifigures, but real attention has been paid to the on-screen characters. Here, Mike wears the beige jacket over a striped polo shirt as seen on screen. 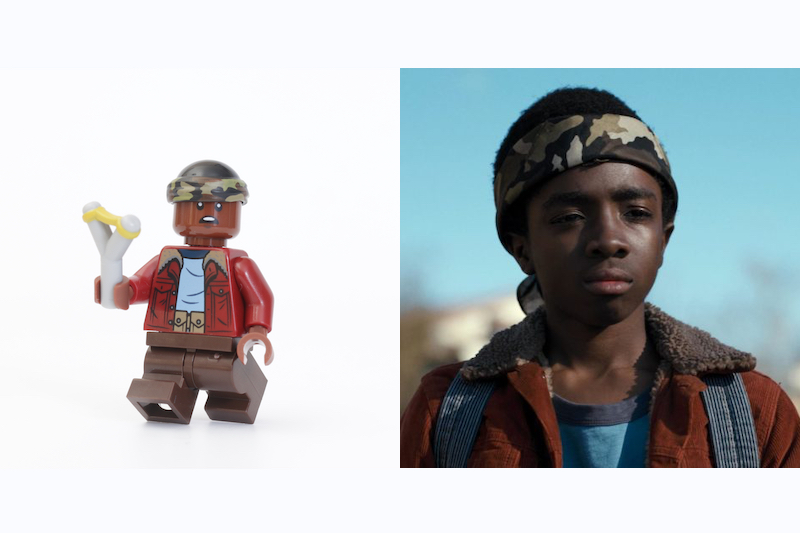 Lucas is the most pragmatic member of the friendship group, using logic to point out holes in some of the more outlandish theories that Mike and Dustin concoct – even if they ultimately turn out to be pretty accurate. When the creators cast the show, they sought to incorporate aspects of the actors into the scripts, in order to better represent real children. Caleb McLaughlin selected the bandana that his character wears.

His minifigure includes that bandana and comes with a catapult, reflecting the one he carried in the show, in a reference to The Goonies. 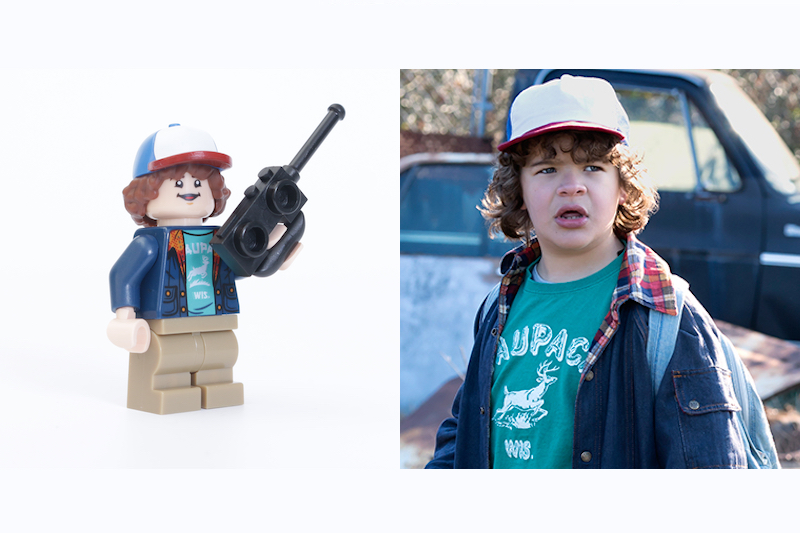 The most likable of the group, Dustin often helps his friends resolve their differences, especially arguments between Mike and Lucas. He has a good grasp of science and technology, constantly having to explain concepts to those around him.

Gaten Matarazzo, the actor who portrays Dustin, has raised awareness of a condition that he was born with, known as cleidocranial dysplasia. It is a genetic disorder that affects the development of the bones and teeth, which the actor has given interviews about in order to reassure others suffering from it, make the general public more aware of the condition and encourage medical staff to treat it appropriately.

Has a minifigure ever had an expression that better captures the character’s look and charm than this one? There is a nice symmetry to this set including a classic radio element that now feels very retro, for a series that used radios as part of its retro vibe. 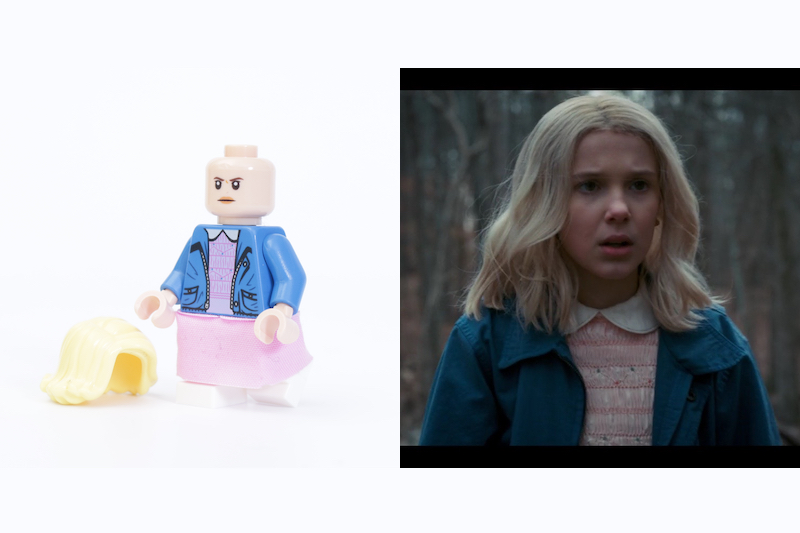 Eleven is played by Millie Bobby Brown, and the young actor had her head shaved in real life for the part. Throughout Season 1, she struggles to connect with the people she encounters, while clearly wanting to establish friendships. Flashbacks to her like in the laboratory show just how difficult her life has been before escaping the Hawkins lab.

The clearest reference to E.T. that is given to Eleven is when she is disguised with the blonde wig, with the entire costume similar to the one that the little grey alien hides in during the classic film. That is not the only one homage, as there is another E.T. callback when she connects with the television and a further scene from the movie is inverted when she causes the villains’ truck to fly over her friends’ bicycles.

This minifigure captures Eleven’s determined expression perfectly, and thankfully opts for her disguise outfit rather than her hospital gown. The LEGO team may be feeling like stepping into more mature territory, but depicting patients kept locked up in experiments really is not what cute little minifigures need. 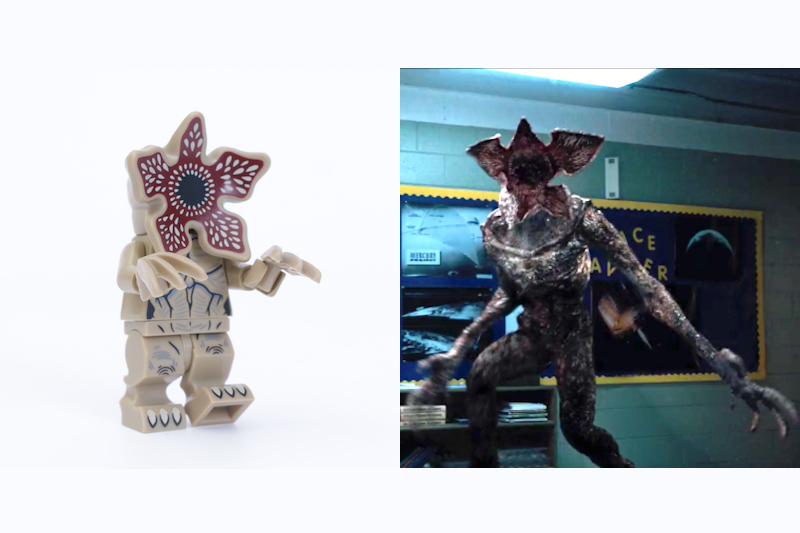 In the very first scene that introduces the core cast of Stranger Things, Mike, Will, Dustin and Lucas are playing Dungeons and Dragons. The events of the season are foreshadowed as the Demogorgon attacks the party in the campaign – Lucas tells Will to use a fireball, but he is defeated. When Eleven uses the D&D board to illustrate where Will is, ‘Demogorgon’ becomes the name that the group gives to the creature that has taken their friend.

An excellent headpiece recreates the monster, which is shrouded in shadow until towards the end of Season 1.

Authenticity has been considered when recreating the characters, as the printing illustrates. New head accessories contribute to this, with a special baseball cap and ahir piece to allow Dustin’s mop to drop from his hat. Will’s mop cut is also delightfully distinct and very 1980s, while Lucas gets his trademark bandana.

As for the leg elements, the new medium sized legs are perfect for these characters – they are involved in a lot of action, so stubby legs that do not move would not have worked,while full sized legs would be too big. Getting five pairs in a box is very welcome. The Demogorgon gets unique legs,