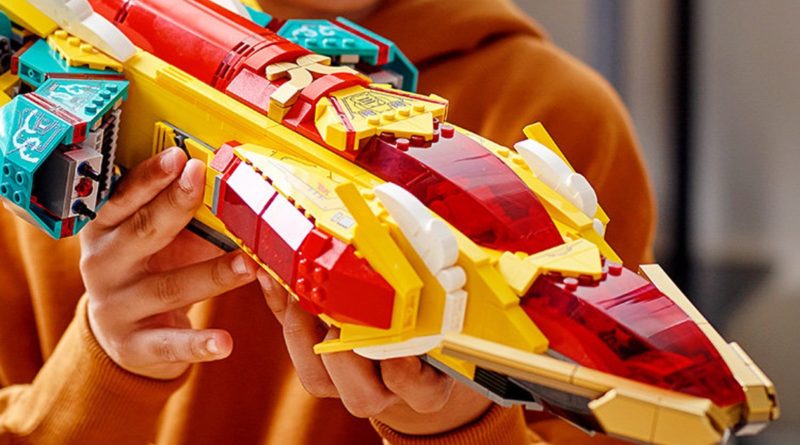 LEGO Monkie Kid is reaching for the stars in 2022 as the first set for the theme next year has been revealed with a colourful spaceship.

The creation is named 80035 Galactic Explorer and was revealed on the LEGO Group’s Weibo page, which is a Chinese social media platform. The first minifigure of Sandy will feature in the set, who previously appeared as a bigfig. Monkie Kid, Mei, Mr. Tang and two evil Monkey minifigures are also included as the team prepares to launch the rocket.

The main build depicts the rocket and a launch platform, which also features a reference to Octan. Drum-lacquered gold lines the front of the vehicle, while yellow, red, blue and white makes up for the rest of the colour scheme to fit in with the other Monkie Kid models.

Interior images reveal a new piece coming in 2022 with a small cloud brick coloured transparent purple and green, with the latter looking like a power source in the rocket’s engine bay. A rover is included with white dome wheels, which looks small enough to fit inside the ship. Otherwise, the spacious inside leaves room for four seated minifigures and one in the cockpit, which is just enough for the whole Monkie Kid team.

LEGO Monkie Kid 80035 Galactic Explorer will launch on December 25 in China according to the social media announcement, but no price or other release dates have been revealed at this time.