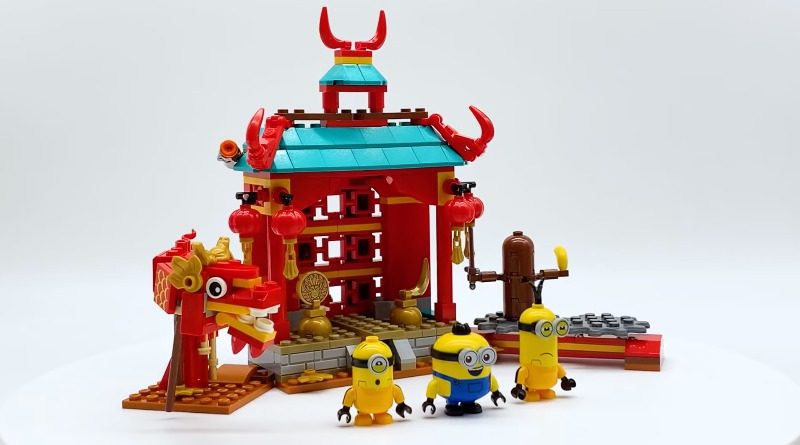 After a series of delays, 75550 Minions Kung Fu Battle has finally made it into the homes of some LEGO fans, offering us the first look at the latest LEGO Minions set.

One of three new LEGO Minions sets to be released this year, 75550 Minions Kung Fu Battle was pushed back as Minions: The Rise of Gru was delayed due to the pandemic. Now that the sale date is fast approaching, LEGO Fan Media are sharing their early opinions of the latest additions to the range.

Bricks By Mind opened his review with a little disappointment in the set, despite it being the one he was most interested in when the three new LEGO Minions builds were released. For its price, the reviewer expected something bigger.

He said: “Now that I have all five Minions sets, somehow this one I think is my least favourite. One major factor of that is just the size of it. This thing is surprisingly small.”

Nonetheless, the YouTuber enjoyed the banana theme of the set, which we can see through with various bananas mixed in with the Chinese lanterns decorations. The detail on the dragon also got a thumbs up within the video, but he was similarly disappointed by the underwhelming size of the dragon.

Bricks By Mind made a lot of comparisons between 75550 Minions Kung Fu Battle and LEGO NINJAGO sets, as similar bricks and styles are at play in this build. The LEGO YouTuber also admitted that the play features, like the brick shooters and the tipping mechanism in the middle, are not that fun for him, but might be more enjoyable for a child.

Moving on to the minifigures, Bricks By Mind noted that these are exclusive to 75550 Minions Kung Fu Battle, but pointed out there aren’t many differences between these ones and those you can find in other sets. Overall, he still liked the design of the LEGO Minions minifigures, keeping it close to how they look in the movies.

For the price point, Bricks By Mind recommended 75551 Brick-built Minions and their Lair as an alternative, with more detail and better value than 75550 Minions Kung Fu Battle. Even still, he thought any LEGO Minions fans would enjoy the unique design and themes of this set.

If you’re tempted to see what the build is like for yourself, you can purchase 75550 Minions Kung Fu Battle for £34.99 from LEGO.com from April 26.