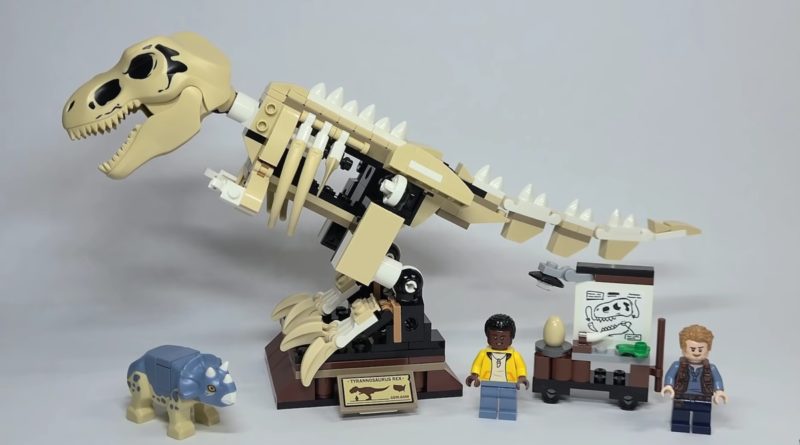 The first look at a fossil-focused LEGO Jurassic World 2021 set has surfaced thanks to an early find of the set before its official release.

Another upcoming LEGO model has been found ahead of its launch by LEGO YouTuber Ashnflash as the first review for 76940 T. rex Dinosaur Fossil Exhibition has arrived.

Many of the LEGO Jurassic World sets since the theme’s debut in 2015 have focused on action and conflict with extinct dinosaurs, sometimes involving a chase and at other times a prehistoric confrontation for the ages. However, that all changes in 76940 T. rex Dinosaur Fossil Exhibition as the action is much more minuscule with the LEGO designers instead turning their focus to a budget-friendly T. rex skeleton.

As noted in the review, an exclusive head design depicts the skull of the fossil complete with the various crevices that can be seen without the eyes and skin. Thanks to the dinosaur being brick-built as opposed to using larger pieces for the body, arms and legs this T. rex is more poseable than the usual living variety found in builds such as 75938 T. rex vs Dino-Mech Battle.

A closer look at the display stand and plaque reveals that guests to the exhibition can see just how large the beast would be to them, with a minifigure replacing what would be a human silhouette. An infant Triceratops and two minifigures are included such as Darius from Camp Cretaceous.

“Honestly if they continue to do more sets like this – more fossil exhibition sets – I think I’ll get every single one of them,” commented Ashnflash. “I really love the idea of this like a Triceratops one in the future would be great or even an Indominous Rex one.”

Thankfully, at least one of those wishes may have been answered in LEGO Ideas 21320 Dinosaur Fossils, which is a comparable alternative to the licensed LEGO Jurassic World 76940 T. rex Dinosaur Fossil Exhibition, which launches September 1.