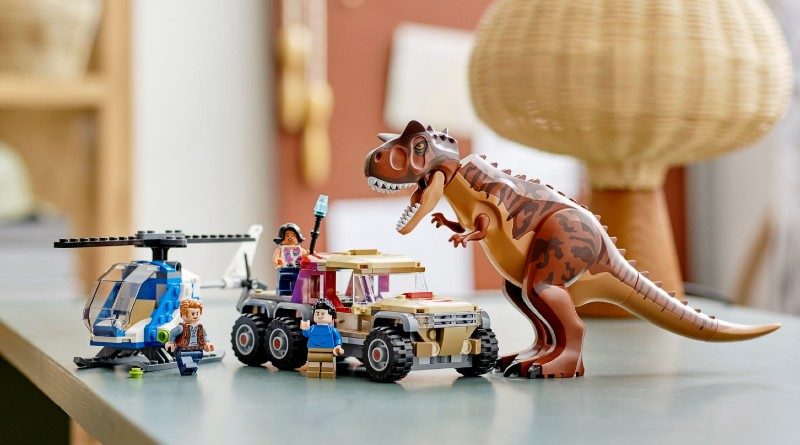 Whilst the new Jurassic World LEGO sets contain a few familiar faces from the theme’s past, a new team of characters from Camp Cretaceous are making their debut.

As part of the new range of Jurassic World models, the LEGO Group are introducing characters from Netflix’s recent animated series, Jurassic World Camp Cretaceous. The show follows the adventures of six teenagers who win an all-inclusive trip to the dinosaur-filled theme park. But as you might guess, things quickly go wrong.

The campers quickly embark on a race across the island to escape hunting predators, malevolent organisations and more. These campers have now been transformed into minifigures, so let’s take a look at the characters we can expect to see when the builds launch.

Appearing in 76941 Carnotaurus Dinosaur Chase, Kenji (left) is the son of a wealthy businessman and has never had to work a day in his life. In contrast, Sammy (right) grew up on a Texan ranch and has a good work ethic, as well as an affinity with animals. However, the Carnotourus in their set doesn’t seem too happy to see her.

Ben (left) and Brooklynn (right) appear in 76939 Stygimoloch Dinosaur Escape along with a third, four-legged member of the team. Ben is a smart and shy character who quickly learns the value and need for bravery to survive thanks to the discovery of a newly-hatched Ankylosaurus named Bumpy.

Brooklynn on the other hand is an outgoing vlogger who has dedicated her life to her fans and visits Jurassic World in hope of increasing her popularity even more. Her minifigure also comes with a hair piece in a new pink colour.

Rounding out the team is Darius (left) and Yasmina (right) in 76942 Baryonyx Dinosaur Boat Escape, though Darius does make a second appearance in 76940 T. rex Dinosaur Fossil Exhibition.

Yasmina is an athletic star who is quickly rising up the ranks and is sponsored by Jurassic World, her independent personality usually clashes with that of the rest of the group, but her sporty minifigure parts might make up for her attitude. Darius is the dinosaur expert of the campers and usually leads the team in surviving on the island.

You’ll be able to find all of the new Camp Cretaceous minifigures, as well as returning characters such as Owen Grady and Claire Dearing, in the 2021 LEGO Jurassic World sets when they launch on September 1. One of them even includes a strangely aquatic dinosaur.