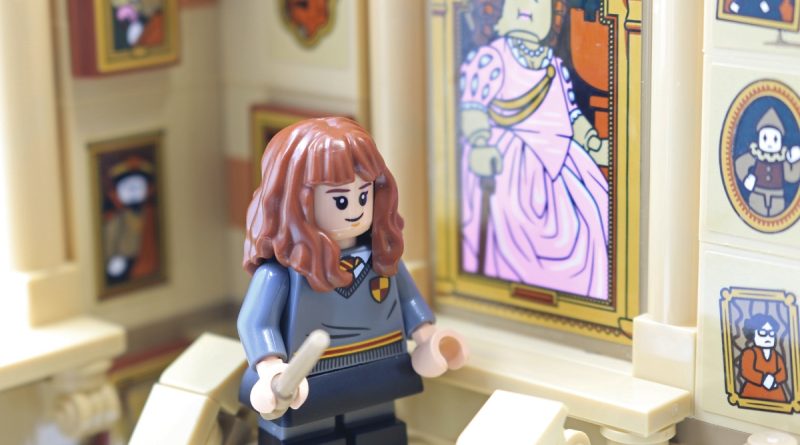 LEGO Harry Potter 40577 Hogwarts: Grand Staircase is available from LEGO.com and in LEGO Stores from tomorrow, and the first reviews are already online.

Free with spends of £130 / $130 / €130 on LEGO Harry Potter sets online and in-store from July 15 to July 31, or while stocks last, 40577 Hogwarts: Grand Staircase follows last year’s 40452 Hogwarts Gryffindor Dorms as a gift-with-purchase that connects to the LEGO Group’s modular wizarding school. That’s the one built up with sets like 76389 Hogwarts Chamber of Secrets, 76398 Hogwarts Hospital Wing and 76402 Hogwarts: Dumbledore’s Office.

While you’ll need to wait until tomorrow to order enough Wizarding World merch to qualify for 40577 Hogwarts: Grand Staircase, we’ve already got a decent look at everything it has to offer through various reviews online. Blocks magazine, for instance, has published an early look at the GWP, detailing the build experience, the numerous stickers and the exclusive Hermione Granger minifigure.

At first glance, Hermione – who’s otherwise ten to a penny in the wider LEGO Harry Potter theme – doesn’t look much to crow about, but this is actually the most detailed version of the Philosopher’s Stone minifigure to date. According to Blocks, that’s thanks to the particular combination of parts deployed here, with a skirt piece and what appear to be the same dual-moulded legs included in 76399 Hogwarts Magical Trunk.

It won’t have escaped your notice that the interior walls of 40577 Hogwarts: Grand Staircase are covered in stickered portraits, but they’re basically a necessarily evil here. They also help to bring the set to life, and – surprisingly – move beyond the first movie (otherwise reflected in the outfits of Hermione and the Fat Lady) to include a portrait of Dumbledore from The Half-Blood Prince.

The model itself sits over two storeys, with the staircase built on to a rotating 10×10 octagonal plate. That’s what gives it the freedom to move between the two open archways on the upper level, each offering a potential connection point to your wider Hogwarts display.

“Altogether the function works really well, but the top of the stairs doesn’t quite reach the landing of the doorways, which does look a little odd,” writes Kat. “There is so much for LEGO Harry Potter fans to like about this gift-with-purchase set, from providing an unexplored part of Hogwarts, to the unique Hermione minifigure.”