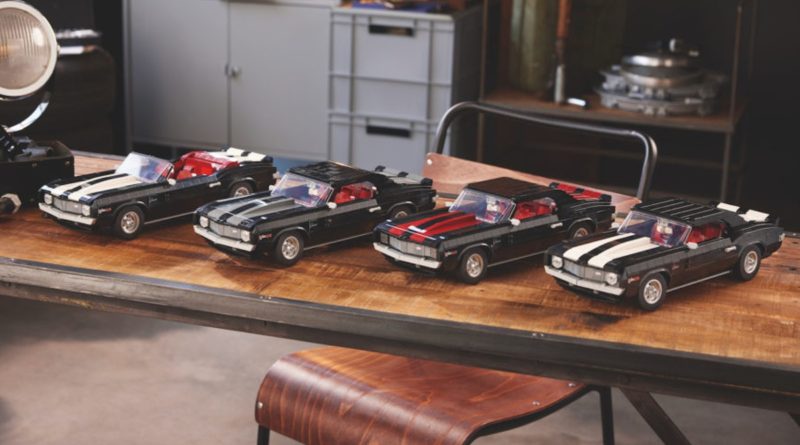 10304 Chevrolet Camaro Z28 is revving into the LEGO ICONS garage next month, but how does it stack up next to the rest of the currently-available car and vehicle collection?

If you know your Chevy from your Mustang and your 911 from your generic pickup truck (erm…), the LEGO Group’s range of large-scale vehicles should be right up your alley. And whether your shelves are already bursting with brick-built cars or the newly-revealed 10304 Chevrolet Camaro Z28 has simply awakened the long-dormant petrolhead in you, there’s plenty to get to grips with in the current portfolio.

Where some sets in this list are inspired by cars few of us will have the opportunity to own in real life, the Fiat 500 – originally released in cool yellow, then later in light blue – is a brick-built spin on a much more affordable and accessible mode of transport. Coupled with how difficult its unique shaping is to capture with LEGO bricks, and 10271 Fiat 500 / 77942 Fiat 500 Blue’s appeal is quickly diminished next to the rest of the LEGO garage.

That’s not to say it’s a bad set, of course – and if you do own or have driven a Fiat 500, the iconic Italian car will likely do more for you than most. But perhaps just as in real life, the LEGO version’s smaller size makes it difficult for it to stand out against its contemporaries.

While the original 10211 Volkswagen T1 Camper Van hung around on shelves for close to a decade, its successor 10279 Volkswagen T2 Camper Van is due to retire by the end of 2022 – less than 18 months after it launched. That could speak to the wider popularity of the revamped blue van, but for us the issues with 10279 begin and end with the build experience.

For the most part, it’s a chore: but that’s not the worst of it. For reasons still unknown to this day, 10279 Volkswagen T2 Camper Van is ridiculously temperamental, prone to falling apart at the slightest of touches. It may be a problem with the clutch power – we’ve heard similar anecdotes from other builders since launch – but whatever the cause, it turns what’s otherwise an authentic and impressive-looking model into an exercise in frustration.

The first-ever LEGO ICONS (formerly Creator Expert) vehicle not inspired by a specific motor, 10290 Pickup Truck instead pulls together facets of multiple ‘50s trucks for a build that’s more concerned with recreating a particular feeling than a real-world vehicle. That’s further communicated through the additional side builds, which allow you to dress 10290 Pickup Truck for all seasons.

It makes for an evocative – if occasionally perfunctory – build, and while the LEGO Group still has issues with colour-matching across its dark red pieces, it’s still a smart choice of hue for what 10290 Pickup Truck is aiming to do. A set that’s easily overlooked in the wider portfolio, but absolutely worth your time.

The LEGO Group turned to movie franchises for its ICONS vehicles in 2020 with 10274 Ghostbusters ECTO-1, and while it’s since been surpassed by another cinematic icon – more on that later – this is still a credible first effort. The ECTO-1 has a head start for its source material, which is still held in high regard among fans of a certain vintage, and also for just being a relatively unusual example in a wider landscape of sports and racing cars.

That doesn’t mean it was a sure thing for the LEGO Group, though – it still needed an expert touch to bring it to life in 2,352 bricks, and that’s exactly what it got from designers Carl Merriam and Mike Psiaki. It’s a little bigger and therefore more expensive than most on this list, but if you need someone to call…

The newest addition to the roster of LEGO ICONS vehicles sits a respectable halfway up this list, and for the calibre of sets that come next, that’s absolutely not a criticism. 10304 Chevrolet Camaro Z28 is a spectacularly fine-tuned muscle car that embraces customisation to a greater degree than any LEGO car before it, offering a total of 15 different possible combinations between its hard top/open roof, racing stripes and headlights.

That’s to say nothing of the build experience, which is just as satisfying as those of the three cars that have trumped it here. There’s very little to separate these sets, is what we’re saying, so at this point it could come down to personal preference, and maybe 10304 Chevrolet Camaro Z28 would rank a little higher on your own list.

The first LEGO ICONS set to offer a choice between hard top and convertible, 10295 Porsche 911 surely gets extra points just for being based on an incredibly cool car in real life, too. Both its Targa and Turbo options are sublime, to the point that you might just end up buying two to build them both simultaneously – and the construction process is so satisfying that you won’t even mind repeating the bulk of it.

It’s also worth noting that 10295 Porsche 911, like several sets on this list, also offers a great base for building other cars. In this case, the part selection lends itself perfectly to a Lamborghini Countach. Who knew? Guess you’ll be buying three now…

The set name and product packaging might avoid mentioning it (presumably for licensing reasons), but 10300 Back to the Future Time Machine is a DeLorean through and through. But as that convoluted product name alludes to, it’s not just any DeLorean: specifically, it’s the version Doc and Marty used to travel through the time in the Back to the Future trilogy.

It’s a stunning recreation of the car that leans into customisation – like all the best vehicles on this list – by offering the chance to build the DeLorean as it appeared in any of the three Back to the Future movies, and has consistently sold out at LEGO.com as a result. Good luck getting your hands on one, then.

10304 Chevrolet Camaro Z28 isn’t the first muscle car the LEGO Group has tackled at this scale: that honour goes to 10265 Ford Mustang, a 2019 set that’s still going strong in 2022. It’s no wonder, either, because even three years on it remains the pinnacle of LEGO vehicle design, channelling all the sharp angles, smooth lines and gentle curves that are characteristic of the Mustang.

Its deep blue base colour contrasts beautifully with its white racing stripes, and you can opt for a classic road version or souped-up racing version by jacking up the suspension, adding a spoiler and side exhausts, and bolting a supercharger to the bonnet. It’s a detailed and dramatic recreation of an absolutely iconic car, and should be at the top of your list if it isn’t already.

10304 Chevrolet Camaro Z28 will be available to purchase from August 1 from LEGO.com and in LEGO Stores. Check out our full verdict on the set here.