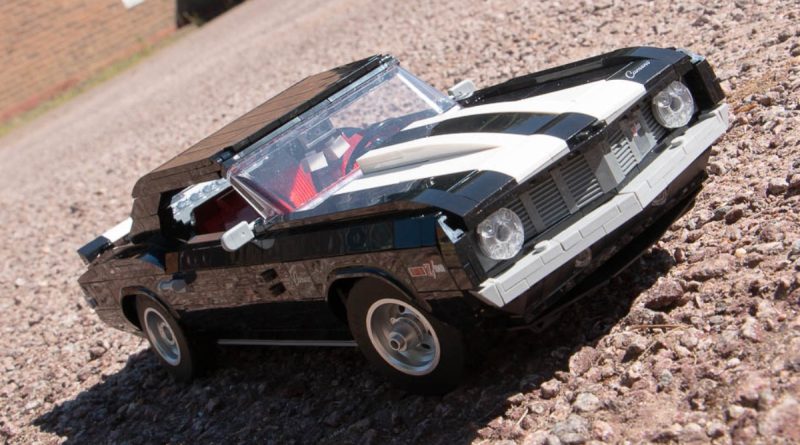 Pony cars. American shorthand for a compact, affordable vehicle that looked like a race car and had the performance to match. In the early ’60s, Ford launched the first of the breed to achieve real success with the Mustang, and it wasn’t long before the competition built their own versions. Chevrolet’s Mustang-rivalling offering was the Camaro, which came in a number of variants – including the Z/28, a performance spec machine that was basically a racing car with number plates.

In 2019, the LEGO Group unveiled 10265 Ford Mustang, a detailed model that, like the original car, was customisable. Builders could take the stock car and jack up the suspension at the rear, add side exhausts and a rear spoiler, and most noticeable of all, add an enormous supercharger. It proved hugely successful.

So it comes as no surprise that we now have another LEGO Pony car to add to the range with the Chevy Camaro. While not as well-known as the Mustang, it has still had its share of time on the silver screen – fans of the Fast and Furious series will recognise it as one of the cars the protagonists won in a drag race against ‘Fabio and Fonzie’ in 2 Fast 2 Furious. Like the Mustang, the Camaro comes ready to modify, out of the box.

The Camaro comes with eight bags of parts and a manual that eschews the new minimalist design language. Instead, it’s wrapped, back and front, with a single, large image of the car against a dark background, reminiscent of an actual car brochure. It starts with some Camaro advertising from ‘back in the day’ and shows the evolution of the car from its introduction back in 1967 to the version on sale today.

This set represents a 1969, first-generation car in its high-performance Z/28 spec, which was easily identifiable by the stripes across the bonnet and boot, or hood and trunk as our American cousins would say. There are some notes from the designer Sven Franic, and then a look at the various options that you’ll have as you move through the build.

Bags one to three create the chassis, and it’s immediately evident that nimble fingers will be an advantage. In order to create a realistic model, the car is built up from many, many small pieces, almost all System parts with just a handful of Technic elements to overcome particular design challenges. As you move through bags four to six, you’ll have to make a decision as to which colour stripes you want your Camaro to have. The car itself is black, and you can choose from an interior-matching red stripe, a subtle grey or a contrasting white.

One minor frustration that becomes apparent on both the bonnet and boot section is that it’s not made obvious, until the step is complete, which pieces are part of the regular build and which are interchangeable. You may spot a couple of pieces in the pictures that were missed the first time around!

Another choice you’ll make as you assemble the bodywork is whether you have regular headlights or use the printed tiles for headlight covers, both of which look equally cool. The engine, which in this case is a 302-cubic inch 4.9-litre V8, is constructed from just a few dozen pieces but looks effective with the bonnet raised.

Bag seven creates the interior, which is minimal but representative of the car of the day, and has terrific, two-tone seats. Both front seats tip forward to allow access to the back, where a copy of Model Team magazine is sitting, giving a knowing wink to a LEGO theme of the past.

At bag eight you have the most significant decision to make. Are you going for the classic hard top or the none-more-cool open top version? It’s safe to say that you’ll want to build them both.

There are no minifigures in this set. It isn’t minifigure scale, and given the realism of the finished model, a minifigure would look out of place. Appreciate the car for what it is.

However, this really is one of those sets that you’ll still be admiring long after you’ve forgotten how much you paid for it. If you can hang on for a while and find it on sale somewhere down the line then, assuming you’re interested in the subject matter, it really is a no-brainer. Even at full price, anyone who owns the Mustang will want, nay, need this to sit next to it.

Not as immediately recognisable as its sibling from Ford, 10304 Chevrolet Camaro Z28 is one of those sets that you don’t fully appreciate until it’s sitting on the table in front of you. Even the picture on the box, which looks pretty good, doesn’t really do the set justice. But sit back, after you’ve attached the last piece, and if you don’t think to yourself ‘that is so darn cool’ (or words to that effect) then you’ve got no soul.

As a build, it’s extremely enjoyable with only a couple of points in the minus column: the aforementioned issues when choosing the stripes, which are easily overcome and something you’re only likely to do once; and in order for the designer to get the rear window in at the correct angle on the hard top variant, it’s not actually attached to anything, just held in place by the window surround. This means it has a habit of dropping a few millimetres, leaving a slight gap between window and roof.

But really, that’s all there is to complain about. It’s an utterly gorgeous thing to look at, and is destined to adorn many a LEGO shelf. Functionality-wise, you’re limited to opening doors, bonnet and boot, plus working steering, but that’s not what this set is about. Too often nowadays, attention is grabbed by the huge sets costing astronomical sums of money. This, by comparison, is a modest size, (relatively) affordable and is one of the ultimate examples of what a skilled builder can do with a box of LEGO pieces. It is without doubt one of the finest sets you’ll build for a long, long time.

Please support the work that Brick Fanatics does by buying your LEGO sets via our affiliate links. Thanks.

How long does it take to build LEGO Creator Expert 10304 Chevrolet Camaro Z28?

How many pieces are in LEGO Creator Expert 10304 Chevrolet Camaro Z28?

There are 1,456 pieces in 10304 Chevrolet Camaro Z28. As well as the usual handful of spare, small elements, you’ll have the extras left over from the two unused stripes.

How much does LEGO Creator Expert 10304 Chevrolet Camaro Z28 cost?