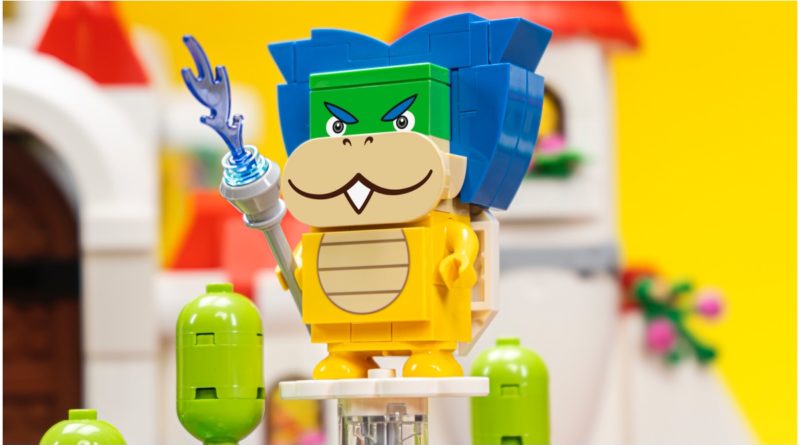 The announcement of the summer 2022 LEGO Super Mario sets has given us plenty of new features to sink our teeth into.

Since its launch back in 2020, the LEGO Super Mario range has proven a hit for the LEGO Group. Around 100 different sets have been released in the range so far (including smaller sets like the Character Packs) and the range has recently drawn inspiration from other games like Luigi’s Mansion. Now the Super Mario line is expanding with some more LEGO sets, with the most intriguing addition a Princess Peach player character.

Of course, she’s far from the only new thing in these sets. We’ve highlighted some items of interest for any LEGO Super Mario fan.

It seems likely that (mechanically speaking) Peach isn’t all that different to Mario and Luigi, although she will bring unique sounds effects to the LEGO Super Mario range. She should also be able to interact with most (if not all) of the Super Mario sets preceding her, and talk with Mario or Luigi during play via the characters’ electronic components.

In a similar vein to the Mario brothers, Peach enjoys a unique crown piece. While out of scale with most minifigures, its small size should make adding it to other sets relatively easy.

71407 Cat Peach Suit and Frozen Tower is one of the more ambitious sets in the new Super Mario wave. In addition to architecture inspired by Peach’s castle, Peach’s cat suit powerup can be found here.

71372 Cat Mario Power-up Pack was an early entry in the LEGO Super Mario line, and allows Mario to walk up vertical surfaces for coin bonuses. Now Peach has received her own version of the suit, which appears here in a fetching shade of pink. It also comes with a pair of adorable mittens for Peach to wear.

It seems likely this suit will mimic the functionality of Mario’s cat suit. However, its different shaping suggests that only Peach can wear it. Conversely, it’s possible that Peach will be unable to wear the other suits the Mario Bros have access to.

This fancy footwear is the focus of 71404 Goomba’s Shoe, and one of the more reasonably-priced sets in the new wave. The curious object first appeared in a single level of Super Mario Bros. 3, but it has acquired something of a cult status. It has also enjoyed appearances in other Mario games, including recent titles like Paper Mario: The Origami King.

We don’t know much about the LEGO version at this point, but it seems likely that it can accommodate a player character thanks to its large size– reflecting its usage in the original Mario games. The shoe may also offer protection from harmful objects in the sets more broadly, which is a benefit of the powerup in the original games too.

The LEGO Super Mario sets come with plenty of interactive features, with Peach bringing a new one with her. Summer 2022 Super Mario sets will reportedly include fruits that can be ‘consumed’ or gifted to other characters. Doing so will trigger ‘positive reactions’ although what that means in practice is unclear. However, some kind of coin bonus or status change is a probable outcome.

One of these fruits can be seen to the left of Yoshi in the above image of 71406 Yoshi’s Gift House. Even if they’re underwhelming, the fruits feature some fun part recolours – specifically, a green minifigure handle with a stud. These parts are extremely useful for custom building, and will hopefully be put to good use by Super Mario fans.

Mario and his friends must face plenty of enemies on their adventures through the Mushroom Kingdom. A few new ones have debuted in these new sets, with a mix of expected and unexpected foes to face.

To nobody’s surprise, two more Koopalings have appeared in the range. Lemmy Koopa joins Peach in 71403 Adventures with Peach, while Ludwig von Koopa appears in 71408 Peach’s Castle, opposite another LEGO Bowser. Given the theme’s success, it seems a full complement of Koopalings is on the cards.

A particularly interesting newcomer is Spike, who appears in 71409 Big Spike’s Cloudtop Challenge. This guy is scaled a little larger than most Mario enemies, and can apparently throw spiked posts at Peach and her friends. This suggests some fun new play scenarios, and is one of the best LEGO takes on a Mario character to date.

All of these models will be available from August 1, 2022 from LEGO.com. In the meantime, LEGO Super Mario fans can receive free polybags with LEGO Super Mario purchases over the next few days. You can also take a LEGO Mario or Luigi figure into a LEGO store to redeem a free Mario-branded coin, though we recommend calling ahead to check they’re in stock.