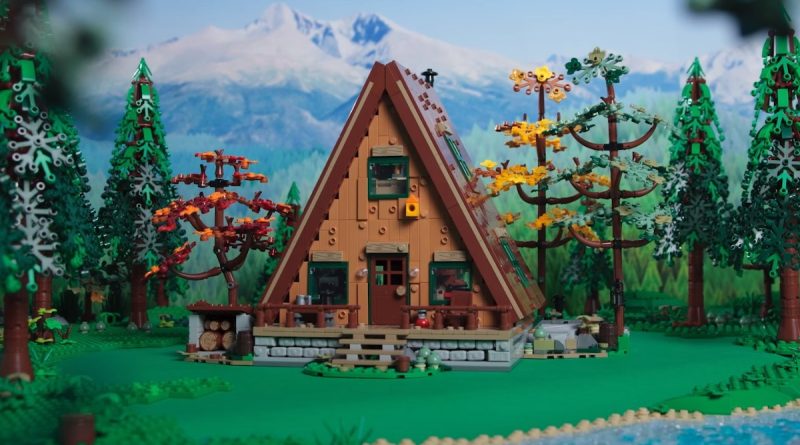 LEGO Ideas 21338 A-Frame Cabin is packed to the brim with references, but there’s a good chance you didn’t spot any of these five hidden nods.

The brainchild of LEGO Ideas user Andrea Lattanzio, 21338 A-Frame Cabin was brought to life by a team of five LEGO designers: Justin Ramsden, Ollie Gregory, Woon Tze Che, Kenza Faten and Ashwin Visser. And between them, they’ve crammed the 2,082-piece model with more references than you can shake a squirrel at.

Some of those were obvious from official images, such as the mini 21327 Typewriter and 21318 Tree House models inside the two-storey cabin – but others are waiting to be discovered when you open the box. Thanks to an early review from Solid Brix Studios, we’ve now unearthed five more hidden references in 21338 A-Frame Cabin. Spoilers lie ahead…

Ah, the humble cardboard box: used for fun things like shipping brand new LEGO sets to your house, and less fun things like packing away said LEGO sets when you run out of room two weeks later. You’ll find one nestled in the crawlspace under 21338 A-Frame Cabin, but this isn’t just any hidden box: it shares its design with the one found in 76218 Sanctum Sanctorum, another model designed by Justin Ramsden.

Another LEGO Ideas model that will transport you to the great outdoors – only a few centuries removed – is 21325 Medieval Blacksmith, a set for which the LEGO Group designed an exclusive printed tile. That same piece hangs just inside the door of 21338 A-Frame Cabin, suggesting it may have been constructed on a medieval burial ground. Time to crack out the LEGO ghost minifigures.

Stop us if you think you’ve heard this one before: a doughnut thief is at large in LEGO city. So proclaims a printed 2×2 newspaper tile in 21338 A-Frame Cabin, making clear and direct reference to the shenanigans going on in 2021’s 10278 Police Station. The doughnut thief in that set operates in plain sight, liberating tasty treats from the police station’s adjoining bakery, and the cops still haven’t caught him. No wonder LEGO City needs so many police sets.

There’s something to spot everywhere you look inside 21338 A-Frame Cabin, and the floating shelf in the bedroom is no different. Sitting next to the books (1×2 tiles) is a tiny yellow car, constructed from just two pieces: a roller skate and a 1×1 rounded tile. Call us crazy, but that particular combo of black and yellow feels like a deliberate call-back to yet another LEGO Ideas set, 2016’s 21307 Caterham Seven 620R.

LEGO designers love taking advantage of the bright colours packed into builds – intended to make the building process more enjoyable – to sneak in hidden references, and there was a very easy one to make in 21338 A-Frame Cabin. Red, white and green pieces in the model’s foundations recreate the Italian flag, in a nod to the nationality of fan designer Andrea Lattanzio.