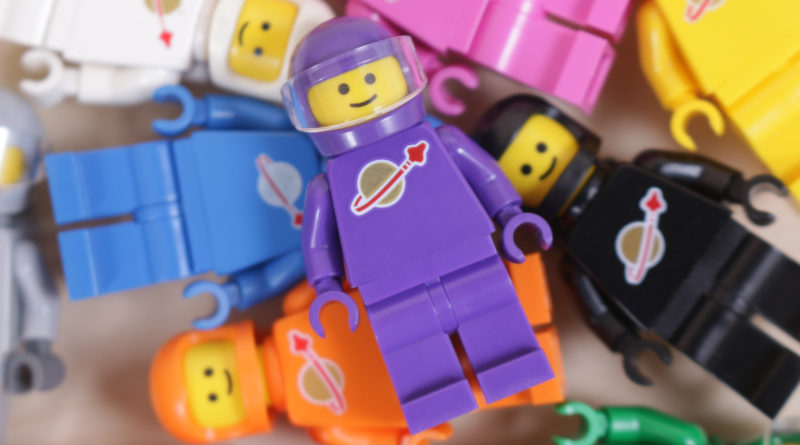 The latest series of Collectible Minifigures brings us a key component in adding another Classic Space astronaut to our increasingly colourful collection.

If you’re only collecting officially-released minifigures, the current line-up of Classic Space astronauts spans eight colours: red, yellow, white, black, blue, pink, orange and green. But if you’re willing to compromise a little with regards to the helmet, you can now take that total to a nice, round 10 different hues – the latest of which has arrived with 71032 Series 22.

This year’s original batch of blind-bagged characters includes the imaginatively-named ‘Space Creature’, a minifigure that inventively re-uses the bobble-head piece to fashion eye stalks for its alien design. But probably a bigger draw for veteran fans will be its purple torso, which is printed with the Classic Space logo, gifting us one of the missing ingredients for a full purple astronaut.

It’s still not quite perfect, though: the airtank piece has never been released in purple, and likewise the original Classic Space helmet, which has a thinner chin strap than the modern-day version of the same piece. The newer helmet showed up in purple in just three Knights’ Kingdom sets in 2004, which makes it pretty hard to come by these days.

In fact, if you want to grab one at the moment you’ll need to pay at least £11.47 on BrickLink (plus shipping). That price has shot up by more than 2,800% since we picked up a few of these helmets in late 2021, but it’s one potentially still worth paying if you want to fashion a full purple LEGO Classic Space astronaut – or as close as you can get in 2022.

The newer helmet does at least fit in stylistically with the green astronauts from 21109 Exo Suit, and also with the grey minifigure facilitated by Rocket Boy’s torso from 71018 Series 17. While the Classic Space helmet appeared in grey in 1982’s LEGO Education set 1066 Little People with Accessories, it’s understandably difficult to find now, so you’ll probably have to resort to the modern grey helmet like us.

That’s not necessarily a bad thing, though: it means that the full purple astronaut – which also requires swapping out 71032 Series 22’s Space Creature’s arms, hands, legs and head – will therefore sit nicely with its grey and green counterparts in your collection, just as it does ours. And it’s definitely worth cannibalising an extra copy of the Space Creature to create…

Support the work that Brick Fanatics does by purchasing your LEGO Collectible Minifigures through our affiliate links. Thank you!