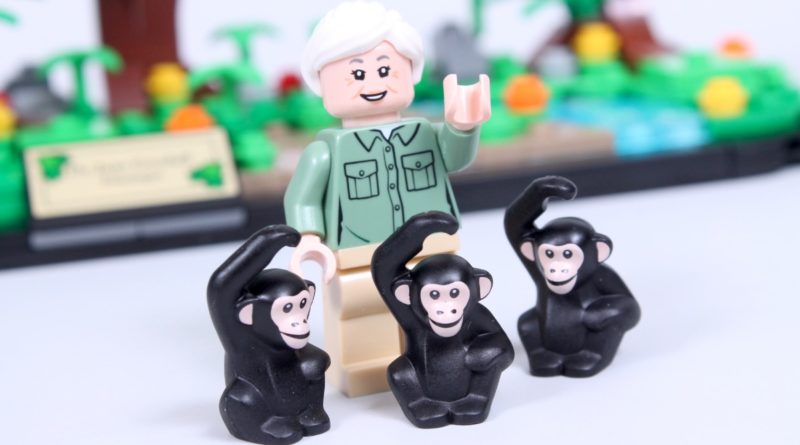 40530 Jane Goodall Tribute is back at LEGO.com in the UK and Europe – with several appropriate choices for clearing the price threshold.

The LEGO Group regularly offers impressive promotional items, and 40530 Jane Goodall Tribute is no exception. The set includes a minifigure of the famous ethologist, as well as a collection of trees and several chimpanzees. It first appeared back in March, but its reappearance here is a welcome one.

Like many contemporary promotional sets, 40530 Jane Goodall Tribute has a rather high price threshold. You’ll need to spend £120 / €120 to receive it in the UK and Europe. However, there are several LEGO sets that would make ideal accompaniments – and most of them are due to leave shelves this year.

From that perspective, this is a rare opportunity to build an excellent LEGO African savannah scene – especially as chimpanzees can reportedly be found in savannah woodlands. Specific subject matter of this kind doesn’t come around all that often, so don’t hang around if this interests you.

For starters, you’ll probably want to pay a visit to the LEGO CITY line. Two large sets have appeared in its Wildlife Rescue collection – 60302 Wildlife Rescue Operation and 60307 Wildlife Rescue Camp. At £79.99 / €89.99 and £89.99 / €99.99 respectively, they’re not quite impulse buys. But they’ll help you close the gap to Jane Goodall – and a pair of monkeys appear in each one.

A few other sets can help you to close the gap. 31116 Safari Wildlife Tree House lets you observe the local fauna in style, and even comes with a giraffe and a flamingo. You can also rebuild the set into a biplane or catamaran instead. Expect to pay £24.99 / €29.99.

31112 Wild Lion is another solid choice. It allows you to build either a lion, an ostrich or a warthog to populate your savannah. It’ll set you back £12.99 / €14.99, although this set clearly benefits from multiple purchases.

41717 Mia’s Wildlife Rescue (from the Friends line) is due to hang around for a bit, but it’s still another worthy consideration. Offering an Africa-inspired animal clinic, it comes with a variety of minidolls and a rather attractive giraffe. It costs £44.99 / €49.99.

Between these sets, you should be able to make an impressive savannah in LEGO form – and score 40530 Jane Goodall Tribute in the process. The promotional set will be available at LEGO.com in the UK and Europe until September 11; however, there’s a good chance it’ll sell out before then.

If you’re concerned about other retiring LEGO sets, be sure to check out our latest article on LEGO sets disappearing in 2022.