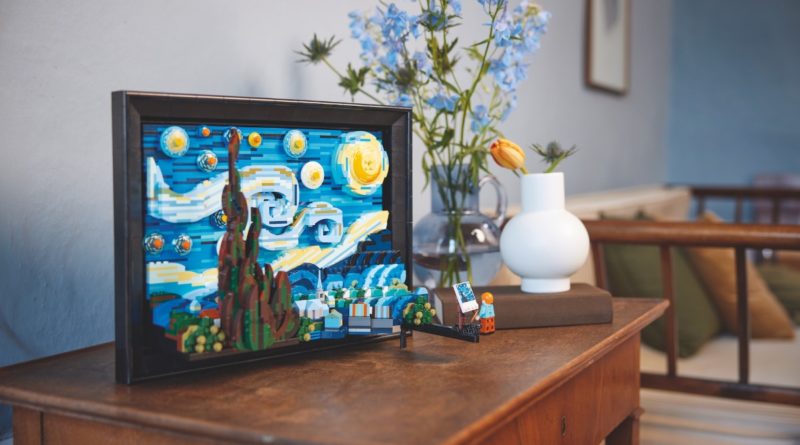 Curious why LEGO Ideas 21333 21333 Vincent van Gogh ­– The Starry Night includes a bunch of extra bricks for its shades-of-blue background? The set’s designer reveals all…

Released in late May for VIPs and early June for everyone else, the 41st LEGO Ideas set transforms van Gogh’s iconic artwork into a three-dimensional model, based on a design by Truman Cheng. The final build adds a deep black frame and swaps out Cheng’s brick-built stars for printed dishes, but otherwise remains pretty true to the original Ideas submission – right down to the background, which layers dozens of 1×4 plates to recreate the artist’s brush strokes.

Given it does so with almost every shade of blue in the LEGO palette, that background is surprisingly challenging to assemble. But when you’ve reached the last step in the instructions, having painstakingly checked and double-checked each plate in each shade of blue has been positioned correctly, you’ll find that you’ve got a bunch of additional pieces left over. Don’t panic: that’s exactly as the LEGO Group intended.

“That’s to prevent people [doing] something wrong,” designer Søren Gehlert Dyrhøj tells Brick Fanatics. “It’s just to be sure that there’s a bit extra, so if you make one mistake, there’s an extra piece. Because I guess it’s probably the hardest part of the model – even though it’s only 1x4s, you still really need to keep an eye on what level you are at constantly.”

While it’s a thoughtful touch from the LEGO Ideas team, it may not necessarily have the intended effect. Let’s picture three different scenarios: first, a builder follows the instructions to the letter, but mixes up one regular blue plate and one medium azure plate, so by the time they reach the final few strips, they’re one short of the colour they need. In this situation, the extra plates are immediately useful.

But to sub in one of the extras – and leave the rest of the model as already constructed – implies that said builder is happy to have gone off-piste earlier in the process. And that’s fine! LEGO sets don’t need to be built exactly as pictured. (This is a creative medium, after all.) But if they’re happy to leave that initial error uncorrected, why would they care so much about getting the colours exactly right in those final steps? Surely using just whatever pieces they’ve got left would do?

And if not, well, that brings us to scenario two: they are absolutely not happy to leave that initial error uncorrected, so the addition of more pieces to rectify it later on is useless. They’re still going to have to meticulously comb through layers and layers of plates to fix whatever they did wrong, building 21333 Vincent van Gogh ­– The Starry Night exactly as designed. In this instance, those extra plates are not especially helpful.

Finally, scenario three: in which the builder has crystal-clear clarity of the LEGO Group’s various shades of blue, puts together the background to The Starry Night exactly as it appears in the book, then finds a bunch of extra parts – and immediately begins questioning whether they’ve made a mistake. Often while building sets that use similar colours, the precise number of those pieces (and the point at which you use the last one) is what communicates whether you’ve placed them correctly.

In fact, that exact situation occurs earlier in the build for 21333 Vincent van Gogh ­– The Starry Night, while piecing together the fiddly (but fantastic) protruding landscape that sits along the bottom of the painting. The various shades of blue and green used for the 2×2 round plates in that section led to more than one instance of unbuilding and rebuilding while putting together our review copy, but we only knew because of the limited and precise number of those pieces in each colour.

Adding a bunch of extra 1×4 plates into the mix for the background could be a benefit, then – or it could sow seeds of doubt, suggesting that you might have gone wrong somewhere along the way. But however you’ve interacted with those additional pieces, at least you now know why the LEGO Group chose to include them.

21333 Vincent van Gogh ­– The Starry Night is available now at LEGO.com. Check out our full and in-depth review of the alternative take on LEGO art by clicking here.