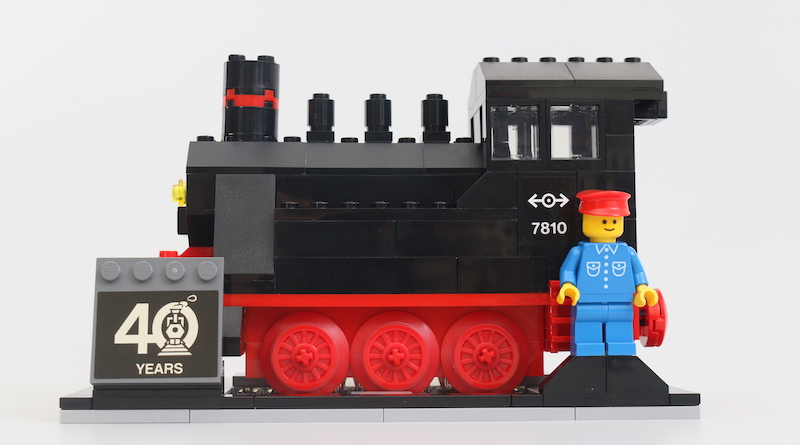 LEGO 40370 is a faithful rendition of an old classic, available for a two-week window at LEGO stores and LEGO.com as a gift with purchase

This year marks 40 years of LEGO trains, according to the LEGO Group, as they take 1980’s 7810 Push-Along Steam Engine as inspiration for a celebratory gift with purchase, by acknowledging it as the launch point for a vehicle and theme since visited in brick form countless times. There are engines and locomotives designed very similarly to 7810 released during the 1960s and 1970s, but, it is 1980’s model that the LEGO Group are taking as the anniversary for LEGO trains, and as the direct inspiration for 40370.

In effect, this promotional item, available for a 15-day window at the start of March as a gift with purchases of £99.99, $99.99 or €99.99, is a modern re-release, with out-of-production pieces like the window frames being swapped out for their modern equivalent, the magnetic couplers changed to Technic plates with an axle hole, printed pieces lost in favour of stickers, and a stand now provided to display the classic design. Otherwise, it’s very much the same build as 40 years ago.

Why mark 1980 and not an earlier year? 1980 marked a significant overhaul in the LEGO Trains theme, as designs were adapted to include the then one-year-old minifigure. Tracks were switched from blue to black and aspects to the remote-control functions, such as the 12v transformer, were brought into better line with more streamlined train models available elsewhere in the market at the time. Essentially, most of what is identifiable with LEGO trains released today can be tracked back to the changes made and principles introduced in 1980.

40370 Train serves train fans nicely, then, as a marker for the start of the modern era of LEGO Trains. Train sets within the Trains theme and in other themes haven’t proven to be a consistent best seller for the LEGO Group, perhaps the result of a shifting mainstream interest through the years. However, trains have still maintained a consistent, if limited, presence on the company’s product range, whilst some of the best large-scale displays at LEGO shows across the world are the ones featuring trains moving around endlessly on a sprawling track. 40370 Train captures the beginning of the theme’s most iconic years, and ultimately, it’s ever-lasting appeal some 40 years on.

It’s a fun build and a nice nod to a key moment in the LEGO Group’s history.

40370 Train is available as part of a promotion starting on March 1 at LEGO.com. You can help support Brick Fanatics’ work by using our affiliate links.