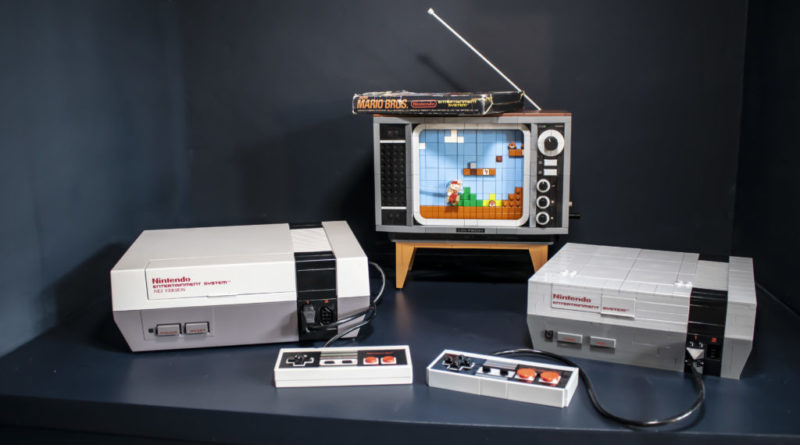 As a child there were two things I was obsessed with; LEGO and Nintendo. As a grown up, not much has changed. So when I first saw the official images of LEGO Nintendo Entertainment System I couldn’t quite contain my excitement and knew it was a must have set for my collection.

The build is incredibly impressive, offering up an utterly enjoyable and deep experience and the final model is possibly the most realistic LEGO set ever produced… but how accurate is it? I still own my Nintendo Entertainment System and I’ve managed to keep the box after all these years (complete with the £29.99 price tag), so I was able to place the two consoles side by side for a detailed comparison.

The LEGO Nes isn’t a 1:1 scale model, being around five cms shorter and thinner, however it goes a long way in faithfully recreating the original ‘grey box’ console, helped a lot by the use of the various printed tiles contained within the set. The colour scheme of dark and light grey with the black stripes along the right hand side look almost identical.

The power switch and reset button are just as accurate, with the LEGO versions being just a little thinner, and the power light is faithfully recreated using a trans-black 1×1 tile. The audio and video connectors on the side look almost perfect and the inclusion of the small inset groove on the side is a wonderful design choice.

The opening flap for the console and the loading tray both operate in almost identical ways and the LEGO cartridge has all the right shaping, even if it is, again, a little smaller. The Super Mario Bros sticker used for the LEGO cartridge is incredibly faithful, including the ‘action series’ graphic. The only difference is the Nintendo Seal of Approval has a slightly different design on the original cartridge.

Inside LEGO NES 71374’s manual is an interview with the designers talking about how fond they are of the design of the LEGO controller. When placed side by side it’s easy to see why. The only differences are slightly larger A and B buttons, along with the slightly thinner SELECT and START buttons on the LEGO version.

The attention to detail doesn’t just stop with the console even the box pays homage to the original packaging of the Nintendo Entertainment System with the star field background surrounding the console – the only difference this time is the LEGO box is much, much larger.

The LEGO NES has clearly been designed by people who love the original console. It’s a set that’s infused with nostalgia, without sacrificing an incredibly high level of accuracy. From a distance I think it would be hard to pick outthe LEGO version from the original. The partnership between Nintendo and LEGO has only just begun but already this faithfully recreated set infused with a passion for the source material can only mean good things to come for the future of LEGO Nintendo.

71374 Nintendo Entertainment System is available now at at LEGO.com. You can help support Brick Fanatics’ work by using our affiliate links.