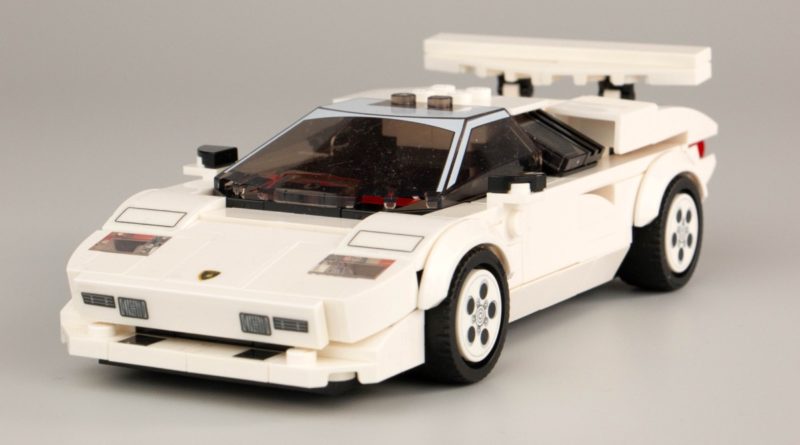 The ‘Italian Wedge’, the car that embodies the spirit of a supercar like no other, joins the Speed Champions line up in 76908 Lamborghini Countach.

The United States might have put a man on the moon in 1969, but just five short years later, Italy entered the space age too. Okay, this particular vehicle may not have made it to the moon, but to people (small boys in particular) who were used to seeing the likes of the Morris Marina or the Ford Escort on the road, the Lamborghini Countach, launched in 1974, looked like it had come from another planet, rather than a small town in northern Italy.

The iconic wedge is one of the latest cars to become immortalised in LEGO as it becomes a part of the Speed Champions family. For a car that seems to be made up of nothing but straight lines, this feels like a perfect fit for the medium. Is it? We shall see…

Like many Speed Champions sets, 76908 Lamborghini Countach begins with the standard chassis plate. This variant appears to be the LP500S, launched in 1982, and so it has a none-more-’80s bright red interior and then the white bodywork reminiscent of a million posters on bedroom walls. It’s not long before the designer’s ingenuity starts to come to the fore, as while the car may have a lot of straight lines, it also has a lot of angles.

Clever use of parts allows those massive air scoops on the rear three-quarters to lean over and, turning the car around, reveals that it has also, in combination with trans-red cones, created the perfect triangular rear light.

Meanwhile, at the front of the car, some more clever thinking is represented with the headlamp cluster. The Speed Champions team is focusing on headlights in 2022, partly to move away from the plethora of stickers that are par for the course with a Speed Champions set, and partly to avoid the complex brick-built solutions.

The Lambo uses a combination of printed pieces, brick-built ingenuity and stickers to create a headlamp cluster like nothing we’ve seen before, with a stickered brick situated underneath a clear brick. You’ll keep picking the car up to admire them.

Inevitably there are stickers. Not too many – 13 in this case – and they finish the car off with lights, air vents, the rear badges and the famous prancing bull on the nose. Unfortunately, their colour-matching makes the white printing on the canopy, which is several shades lighter than the rest of the car, stick out like a proverbial sore thumb – a real sticking point, if you will.

A driver/mechanic minifigure is included with the set. He comes with a spanner, a black helmet (or alternatively a hairpiece), black zip-up jacket with the Lamborghini badge, some designer stubble and the sort of beaming grin that says: “I get paid to drive a Lamborghini.”

Many of those who had Lambo posters on their walls will also have been of an age where they collected Matchbox or Hot Wheels cars. They were fun, often represented the more exotic side of motoring and were sufficiently affordable to mean that collecting them wasn’t an expensive hobby. Speed Champions seems to be a modern-day equivalent.

At £17.99 / $19.99 / €19.99, 76908 Lamborghini Countach is an impulse purchase for many, and not unreachable for younger LEGO fans. It provides a fun and interesting build and is as at home on a display shelf as it is being zoomed around the floor, and therefore represents excellent value for money.

Many of the cars in the Speed Champions range are the sort of rarified exotica that even the most hardened of car enthusiasts will never see in the metal. While the Countach was undoubtedly rare – fewer than 2,000 were ever built, despite a 16-year production run – it has become the de facto supercar for many. Give a child (or a grown man) a piece of paper and a pencil and ask them to draw a supercar and chances are the result will look something like 76908 Lamborghini Countach.

Is it perfect? No. The pedantic might point out that the wheels are flat rather than the archetypal concave rims. Moreover, given that this was the first production car to have scissor doors, it’s a shame that this model doesn’t have opening doors at all, scissor or otherwise. These are minor niggles though and the list of what’s wrong is tiny compared with the list of what the LEGO Group got right with this set.

Over their seven years (and counting) Speed Champions sets have, particularly since their move to eight studs wide, developed a reputation for offering remarkably detailed sets with innovative build techniques at an affordable price. 76908 Lamborghini Countach continues that tradition. Fun to build, great to look at and instantly recognisable, it warrants a place in any collection.

Support the work that Brick Fanatics does by living out your childhood supercar fantasies using our affiliate links. Thank you.

How long does it take to build LEGO Speed Champions 76908 Lamborghini Countach?

The parts for 76908 Lamborghini Countach come in two bags. Construction takes about an hour, which gives a leisurely build and plenty of time to put the 13 stickers on straight.

How many pieces are in LEGO Speed Champions 76908 Lamborghini Countach?

It takes a total of 262 pieces, most of which are white, to build 76908 Lamborghini Countach.

76908 Lamborghini Countach is 15cm long, about 7.5cm wide and like its real-life counterpart, it’s low – just under 5cm tall.

How much does LEGO Speed Champions 76908 Lamborghini Countach cost?