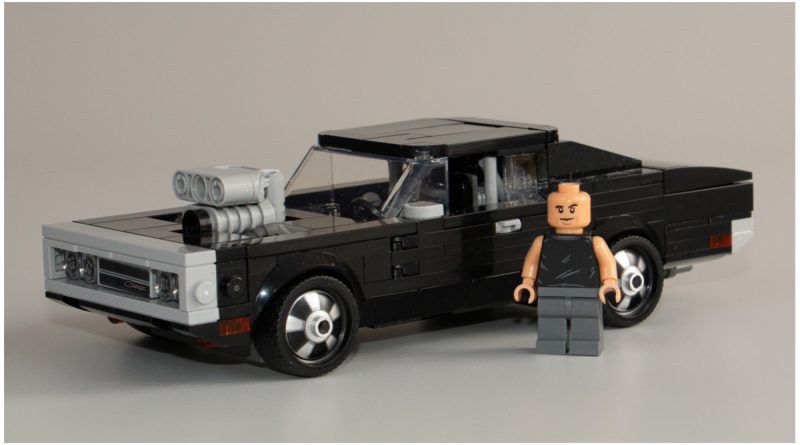 The combination of global warming, the race to net zero and constant improvements in the efficiency and range of electric vehicles mean that petrol-powered cars are probably coming to the end of their time on the highways and byways of our world. With their calming, almost-silent operation, and a need to drive them carefully in order to squeeze every last mile out of their range, electric vehicles are the new, mild-mannered denizens of the road.

Which is more than can be said for this particular car. 76912 Fast & Furious 1970 Dodge Charger R/T represents a remnant of the gas-guzzling, gravel spitting past, when fuel was cheap and massive horsepower was more important than low CO2 emissions. Even in stock form, the Dodge Charger was an iconic muscle car. Of course, that’s before a certain D. Toretto Esq. got his hands on it…

LEGO Speed Champions 76912 Fast & Furious 1970 Dodge Charger R/T is available at LEGO stores and from LEGO.com, plus a wide range of other retailers. Of course, if you’re going to do it properly, then you’ll need to get it from a backstreet mechanic who has built it from parts that fell off the back of a truck. We’d suggest sticking to the high street, though.

Most of the biggest film franchises in cinematic history build rich worlds and populate them with diverse, fascinating characters. The Marvel Cinematic Universe has its astounding roster of heroes and villains. Harry Potter and his companions exist in a dark yet exhilarating universe. Star Wars retells the age-old story of good versus evil on the grandest of scales…

And then there’s the Fast & Furious franchise, which mostly consists of paper-thin characters driving ever-more-ludicrous cars through ever-larger plot holes. With 11 films (including spin-offs) to date – and two more on the way – grossing in excess of $6 billion, it’s proof positive that not everything has to be high art to make money.

When the LEGO Speed Champions team decided to branch out from replicating the fastest cars the real world had to offer, they turned to the silver screen for inspiration. Of the two cars they chose to start with, one was a classy Aston Martin owned by a certain suave spy. The other was this, an over-engineered beast of a car, powered by high-octane fuel, nitrous oxide and special effects and driven by the voice of Groot himself, Vin Diesel.

This isn’t the first time a 1970 Dodge Charger has shown up in the Speed Champions range. Back in 2019 it appeared as part of a twin pack, but it was in the six-studs wide days, and looking at it now, it looks more like a cartoon version. Those of a certain age will remember Hot Wheels: small, pocket money die-cast cars that favoured the ridiculous over the realistic. It looked a bit like that.

But the new version? With jacked up suspension, a nitrous tank and roll cage installed and a supercharger large enough to generate its own gravity, it’s a stretch to call it realistic. But ridiculous, no. Mean? Oh yes. Dom Toretto’s Dodge Charger is all about power and attitude. Remember the Monkees? They had the cute and comedic Monkee Mobile. But if AC/DC had a car, it would be this.

As with most Speed Champions sets, 76912 Fast & Furious 1970 Dodge Charger R/T is a great build experience. Unlike some of the curvaceous supercars in the range, the straight lines of the Charger suit the LEGO medium perfectly and an accurate shape soon emerges. Unlike many others though, there’s enough room, and enough parts, to create a half-decent interior. As well as the nitrous tank there’s a gear shifter, a roll cage and what used to be the back seat. As a result, the roof panel is easily removable to examine the inside of the car and to place Dom into the single seat.

The only let down on this set is the nose section. In reality, the Charger does have a slim silver trim surrounding the grille and the headlights. But at this scale it has to be recreated with tiles a single stud deep, which is too large and the grey dominates the front of the car to the detriment of the overall design. It’s a shame and is a blemish on an otherwise excellent model but, to be fair to the designer, there wasn’t really an alternative.

On the upside, this set comes with just five stickers. With Speed Champions sets regularly coming with upward of 20 stickers, that’s unheard of. It’s a shame, though, that the budget couldn’t stretch to just one printed piece. The grill, with that instantly recognisable ‘Charger’ script really needs to be straight and with a sticker, it doesn’t always end up that way.

All minor quibbles though. The LEGO Speed Champions line goes from strength to strength and this is another superb example in a theme that has an embarrassment of riches, making it an essential purchase for those with high-octane fuel running through their veins.

For such an iconic car, the minifigure of Dominic Toretto is surprisingly plain. The face print is unique to this set but looks fairly generic and could easily have been taken from any of the many ruffians that populate LEGO City.

Likewise, the torso with a black sleeveless top is unique but unremarkable. A few simple creases back and front is all it gets. Add in a plain set of grey legs and that’s your lot. Standing next to the car, anyone familiar with the films will identify this as Toretto, but away from the vehicle, he could be anybody.

76912 Fast & Furious 1970 Dodge Charger R/T is an excellent set. Speed Champions completists will be happy to add this to their collection and there will be more than a few film fans who choose to pick this up, irrespective of whether they’re LEGO fans or not. A detailed, accurate model that proves that the move to eight studs wide was undoubtedly the right thing to do, at less than £20, this is money well spent. As one other reviewer notes, it’s also a bargain next to similarly-sized Batman cars…

This is a no-brainer for anyone with an interest in this theme. With the possible exception of that grey nose, 76912 Fast & Furious 1970 Dodge Charger R/T is about as good as Speed Champions sets get. It’s fairly accurate with a sufficient nod to the ridiculousness of the source material to know that the designers (and indeed the filmmakers) weren’t taking this car too seriously. In a world of £500+ LEGO sets that threaten to take up most of your living room, this is a set that looks cool, sits in the palm of your hand and comes in at impulse purchase money. What are you waiting for? Wake up and smell the nitrous!

There are a couple of muscle cars in the current Speed Champions line up, a 1969 Chevrolet Corvette and a 1970 Dodge Challenger T/A. Both, however, come as part of more expensive twin packs. The only other car that might catch Mr. Toretto’s eye is 76901 Toyota GR Supra, although that’s more likely to appeal to his late sidekick, Brian O’Conner, given Dom’s preference for American muscle over Japanese technology.

76912 Fast & Furious 1970 Dodge Charger R/T is an interesting build. With more parts than most Speed Champions sets, it’ll be about an hour before you’re heading out to see how fast you can run the quarter mile.