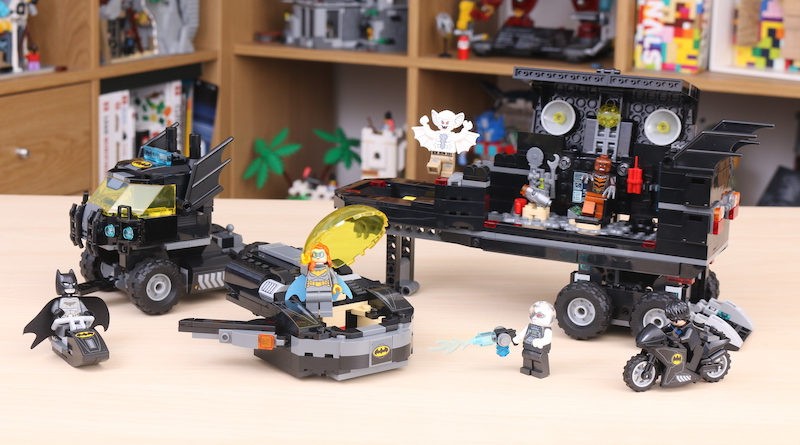 On first impression, 76160 Mobile Bat Base is an overpriced, unnecessarily juniorised LEGO Batman set. And it’s downhill from there.

Indeed, with further consideration, 76160 Mobile Bat Base is definitely an overpriced, unnecessarily juniorised LEGO Batman set. Whilst no doubt neat for a specific and very young target audience of LEGO builders, for everyone else, this is a generic and commonly-released truck with Bat-winglets stuck on top. You can’t squint hard enough to make it look like a Batman set.

LEGO Batman (or LEGO DC Comics Super Heroes sets with Batman in them) is a theme that in recent years seems to have fallen into a particular pattern, going one year from junior sets to another year with higher level sets, before the next year going back again. And that’s curiously even as the age recommendations for the sets released doesn’t venture beyond the 7+ and 8+ territory.

So, where 2018 gave us a massive trike not even a nightmare sequence could dream of, 2019 impressed with 76120 Batman Batwing and The Riddler Heist and 76122 Batcave Clayface Invasion, just as 2020 threatens to disappoint again with 76159 Joker’s Trike Chase and, the subject of this review, 76160 Mobile Bat Base. These most recent additions to the Dark Knight’s LEGO collection are, on the face of it, far more juniorised – bulky, uncomplicated vehicles prioritising play over display and scale.

Last year’s 76120 Batman Batwing and The Riddler Heist offered a clever update on a classic Bat-vehicle and a rare taste of Gotham PD with an intelligent and effective police car design, just as 76122 Batcave Clayface Invasion brought a darker, detailed Batcave design most comparable with the very first – and best – LEGO Batcave from 2006. These sets conveyed a touch of authenticity in both detail and environment to their source material. And for the younger audience, this was balanced with an element of fun and fantasy play, thanks in no small part to the giant Clayface in one and the Riddler helicopter in the other.

By comparison, 76160 Mobile Bat Base brings gimmicks galore across 743 pieces of black and dark grey that, for any more aware LEGO Batman fan, offers plenty to fiddle with, but, very little of deeper interest. This is primarily due to a lack of originality. The LEGO Group has more than a decade’s history of releasing mobile bases like this, with Alien Conquest, Agents, Ultra Agents, CITY, Teenage Mutant Ninja Turtles and NINJAGO, to name a few, all getting such treatment. It was only a matter of time to try the same with Batman…

But, it’s not the decision to create a mobile command base for Batman where the lack of originality bites, because there’s potential to be explored and enjoyed in the concept of a Batman-themed mobile base, particularly with his arsenal of gadgetry. The lack of originality is most critically felt in 76160 Mobile Bat Base in the application of that idea.

New pieces, stickers, a different colour scheme and slight tweaks here and there cannot hide that ultimately, this carries so much of Agents’ 8635 Mobile Command Center from 2008, or – even worse considering the colour scheme – Ultra Agents’ 70165 Ultra Agents Mission HQ. Smaller vehicles breaking away from larger vehicles or hidden away on areas on the trailer, a large screen and seating area to track crime, a small chamber to hold a villain, and a bulky truck to pull it all along. These are all neatly constructed play points within 76160 Mobile Bat Base, but, are all designed and built incredibly similarly to sets that have come before in a lot of other themes.

With LEGO in particular, there’s nothing wrong with revisiting popular design concepts from the past and applying them to new sets and to new themes, but, 76160 Mobile Bat Base does not innovate or upgrade what is becoming a tired mobile command base trope, nor, just as crucially, does it  add enough of its own theme’s identity to the common cross-theme build. That flyer that pops off the front of the trailer could be anything but from Batman, with wings that you would need very kind (or poor) eyes to accept as Bat-like. Likewise, the truck is neither covert enough to plausibly be something anyone but Ben Affleck’s version of Batman could have designed, nor, conversely, identifiable enough to truly belong to Batman, beyond the giant winglets stuck on it. Did Bruce Wayne just buy a black truck and drunkenly glue on some Bat-wings?

76160 Mobile Bat Base is silly. Batman has a silly side and the LEGO Group likes to lean into it from time to time, but, you can’t see enough of the colour and fantasy of a camper Batman to excuse 76160 that easily.

That’s in part down to the selection of minifigures. If there’s one thing to save this set, it’s the six characters included, ranging from familiar and common to brand new and obscure, and all delicately created in a far more mature colour scheme and design than the vehicle they come with.

As beautiful and photogenic as they are, and credible as additions to a Batman minifigure collection that is likely getting out of hand now, they do not save 76160 Mobile Bat Base enough to say it’s worth the £79.99 price tag. It’s a set that packs a lot into it, but does so without harnessing the identity and originality that – particularly with the use of the tried and tested LEGO set formula of a mobile command base – was drastically needed here, to make it either an interesting LEGO set on its own, or a credible one within the LEGO Batman collection.

For the very youngest LEGO builders, hovering around 76160 Mobile Bat Base’s starting age recommendation of 8+, there’s fun to be had here, for sure. But, anyone building at a more mature age than that will find themselves gravitating towards other themes. And that’s a disservice to LEGO Batman.

76160 Mobile Bat Base is available now at at LEGO.com. You can help support Brick Fanatics’ work by using our affiliate links.