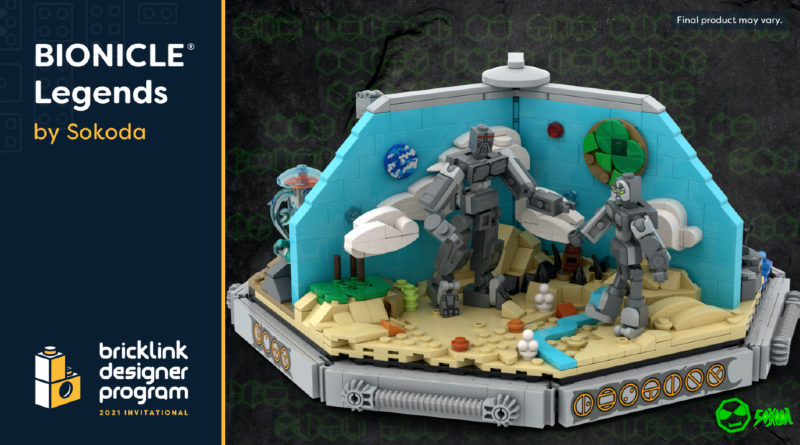 The BrickLink Designer Program is about to begin so Brick Fanatics is taking a look at the models in the first round, including one for a returning theme.

As BIONICLE celebrates 20 years, one fan decided that the LEGO Group needed something to celebrate the anniversary of the story-driven theme and set about to create a LEGO Ideas project celebrating the legend of BIONICLE. Unfortunately, that particular project never managed to make it as an official set – at least not the first time round.

Joining seven other projects in the BrickLink Designer Program is that same LEGO Ideas submission, returning for another chance at an official LEGO set in time to mark 10 years of the theme. Sokoda is the fan responsible for designing the model and we’re here to remind you of what to expect so you can decide whether to pre-order the build come the beginning of crowdfunding.

The model itself features a base with insignia and runes from BIONICLE as well as gear detailing thematic to the constraction figures. Sat atop the base is a trio of scenes that enthusiasts of the theme will recognise from the story, stretching from the very beginning to the final battle between two colossal titans. These dioramas might still be desirable to those unfamiliar with the theme too with the new designs on the pieces as well as the unique scenes presented from a microscale beach to an underwater world.

Fans of BIONICLE will almost certainly already be planning to pre-order the project when the first round of the BrickLink Designer Program begins, but be warned that only the first five models to receive a minimum of 3,000 orders will become official sets.

You can start pre-ordering BIONICLE from July 1 at 4pm UK time and there are plenty of other projects to put your funding towards too. From an endangered species to a Castle of the Forest, stay tuned as the first phase draws near.