Are these Simpsons BrickHeadz enough to conjure memories of the show’s golden age, or will they just leave the sour taste of post-season 15?

Surprise – The Simpsons licence isn’t dead and gone after all. We might not have had a new minifigure-based set since 2016, but in the world of BrickHeadz, anything goes. And that includes, apparently, resuscitating dormant licences, as well as bringing in new ones. But is 41632 Homer Simpson & Krusty the Clown enough to win over even non-BrickHeadz fans?

Homer was an obvious choice for the first Simpsons character to convert into the blocky statue template, but Krusty might seem like a less clear candidate – to the uninitiated, that is. In fact, the pair go way back, even beyond the legendary season six episode Homie the Clown. Matt Groening’s original concept for Krusty was just Homer in makeup (hence the shared likeness), with the twist being that Bart disrespected his dad but adored a TV clown, not realising they were one and the same. 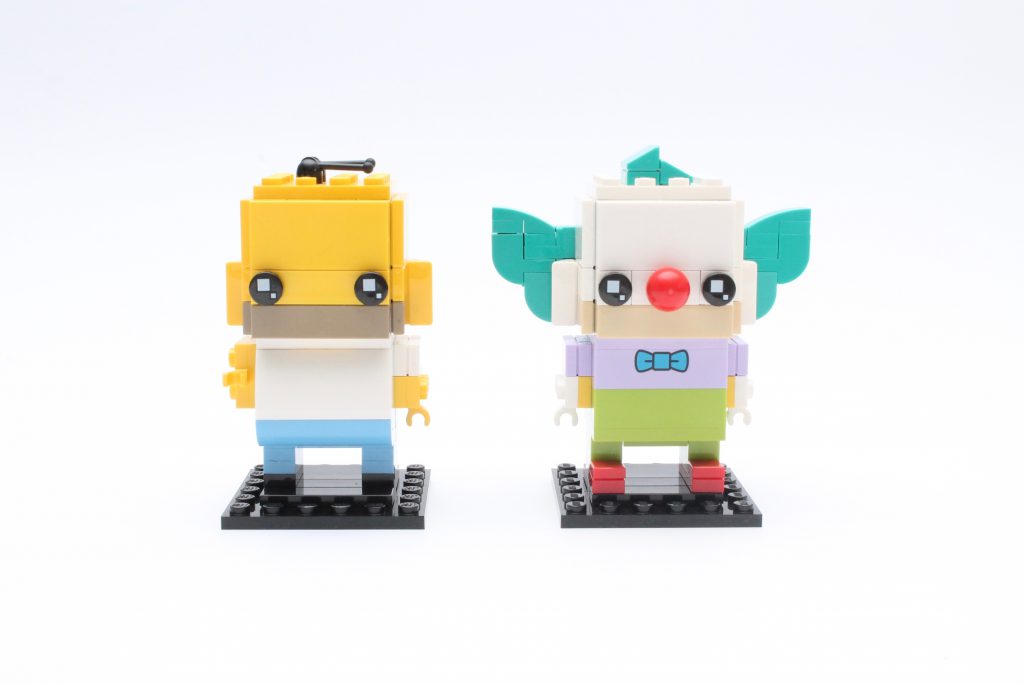 That plotline was ultimately dropped, but Krusty’s prominence wasn’t: across the first 27 seasons of the show, he had the ninth-most lines of any character, and the fifth-most outside the main family. So, it makes sense that Krusty would be paired with Homer. Or, you know, the LEGO Group just wanted to make the most of bringing teal back.

That’s because Krusty’s iconic hair is all teal slopes and plates, making this an unmissable pick-up for those hoping to amass large collections of the recently reintroduced colour. Otherwise, the clown is simple, but effective: these are cartoon characters, so bright, bold colours are the order of the day, with minimal detail. The only printed part is his bow tie – but that’s honestly enough.

Character-specific details are captured in other ways, anyway – his comically large feet extend forward with red plates, while regular tan tiles offer some distinction between his white face paint and permanent five-o-clock shadow, mirroring Homer’s dark tan version. It all makes for a recognisable figure, as long as you ignore the eyes.

Yes, if the BrickHeadz eyes seem weirdly unsuitable for live action characters, then they’re even worse for The Simpsons. Part of the yellow-skinned characters’ aesthetic is their enormous eyes, and that’s totally lost here – a consequence of the template, sure, but there’s a disconnect there that might just be enough to alienate fans of the franchise.

If you can get past the eyes, then you’re in for a treat with Homer, who has what might just be the BrickHeadz’ first ever play feature. His rotund figure is achieved using slopes, as you’d expect, but it conceals something hilarious. Pull it, and it slides out to reveal a hollow drawer, into which you can drop the extra donut tiles included in the box.

It’s a great feature that really sets Homer apart from his fellow BrickHeadz, Simpsons or otherwise. And arguably, it’s one he sorely needed: otherwise, he’s about as plain as it gets. Two levers and printed tiles stand in for the few strands of hair left on his head (post-three kids), but otherwise he’s totes basic. Fortunately, that stand-out stomach option is there to make him, well, stand out.

Simpsons fans will be happy to see the licence return to LEGO Store shelves in 41632, but this BrickHeadz pack does more than just pander lazily to that market. Homer is unique enough – despite initial appearances – to win over any BrickHeadz fan looking for innovation in their blocky statue collection, and Krusty ticks off all the hallmarks of the character too. Essentially, there’s more reason to buy this two-pack than just “because it’s The Simpsons”, whether you’re a fan of the show or not.

41632 Homer Simpson & Krusty the Clown is available now at shop.lego.com. You can help support Brick Fanatics’ work by using our affiliate links.