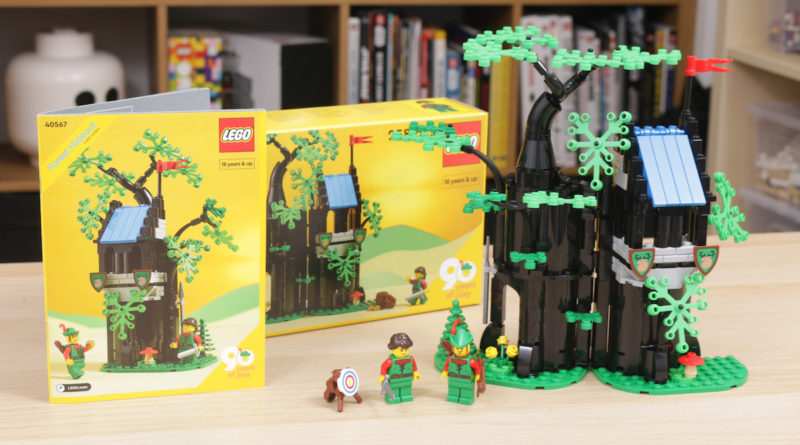 LEGO Castle is back – sort of – in the form of the Forestmen-inspired 40567 Forest Hideout, and it’s a delightful remaster of an old classic.

As part of the LEGO Group’s 90th Anniversary celebrations comes 40567 Forest Hideout, available as a promotional item from June 15 to June 22, or more accurately while stocks last, awarded with LEGO merchandise purchases at LEGO.com or in LEGO stores of £150 / $150 / €150 or more.

That’s a significant spend required to pick up this Forestmen-themed freebie, but we have bad news for your wallet because for what this set is and for just how skilfully it tugs at your nostalgia, you’ll likely still not be able to resist.

40567 Forest Hideout is a remaster of 1988 LEGO Castle Forestmen set 6054 Forestmen’s Hideout. Re-releasing this June for just a week-long promotion after 34 years, 40567 Forest Hideout explores the same premise of a mini hideout built within a tree, but with modern parts selection and techniques. At a glimpse, it’s nigh-on the same set that a number of us will likely have memory of playing with or seeing on toy shop shelves as a child all those years ago (the LEGO section of a toy store back then was quite something…).

Putting it together and having it in hand it’s more apparent what aspects have been able to be improved, to keep the spirit of 6054 Forestmen’s Hideout in place, but give 40567 Forest Hideout a deserved place as a standout gift-with-purchase in its own right in 2022, as the LEGO Group celebrate their 90-year Anniversary.

An updated build that manages to at once play to the nostalgia we all feel for something from the Classic Castle era and also bring the theme into the modern LEGO world isn’t where 40567 Forest Hideout stops either – included are two Forestmen minifigures, better realised as Forest people, as we have one male and one female, wearing updated versions of the outfits the Forestmen minifigures from the 1980s and 1990s were so iconic for.

As far as taking an old set and remastering it for a new audience (and the same audience for those of us old enough), what could have been viewed as a cynical cash-grab is in fact so brilliantly and carefully realised, so as to make 40567 Forest Hideout the most desirable gift-with-purchase so far in 2022, full of the same charm and appeal as the original set it has been based on, from 34 years ago.

So well done is 40567 Forest Hideout that it opens up a route that the LEGO Group has previously teased at in recent years but never fully committed to – full-on remasters of some of the old classics from their back catalogue. We’ll have to watch this space and hope that the 1980s and 1990s nostalgia that the LEGO Group is so heavily leaning into with licenses (Transformers, Ghostbusters, Back to the Future, Jurassic Park) extends into their own products from that time, if the approach taken for 40567 Forest Hideout is the benchmark.

This product was provided by the LEGO Group for review purposes.