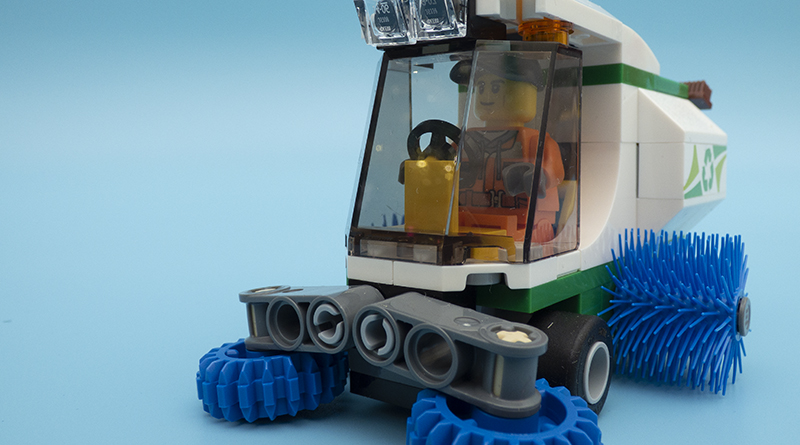 60249 Street Sweeper is keeping the roads of LEGO City clean

Street sweepers have turned up every now and again in LEGO Town and City, but it has been a while since the last stand-alone one was released (one was included in 60132 Service Station). 60249 Street Sweeper takes the subject matter and offers a completely new take on it, both in terms of shape and colour scheme.

The little set builds, as its name suggests, a street sweeper. It is a one-person vehicle that will trundle around the city centre cleaning up the roads. Typically, these have been yellow in the Town and City themes, but this version feels more modern thanks to being in white with green accents.

It is not just the colour that makes this vehicle feel current, with the angular shape also reflecting a modern, electric street sweeper. When looking at the set, it is hard not to imagine it moving around a modern European city.

Previous takes on this vehicle have simply used the large brush elements to have the street sweepers rolling up the litter, but for the first time here two Technic wheels are used as vertical brushes at the front. These turn as the sweeper is pushed along thanks to a simple but clever construction that means one edge is touching the surface.

To complete the story, there is a door at the back for the worker minifigure to remove the rubbish from along with a spade to help with the job. A bin and a brush will also help with this unappealing work. A simple orange worker’s torso is all the driver needs.

A LEGO City layout is brought to life by all of the little touches that are added around the main feature buildings. 60249 Street Sweeper is a set that will do just that — once again, a rather mundane vehicle has provided the inspiration for a delightful little LEGO set.

60249 Street Sweeper is available now at LEGO.com. You can help support Brick Fanatics’ work by using our affiliate links.