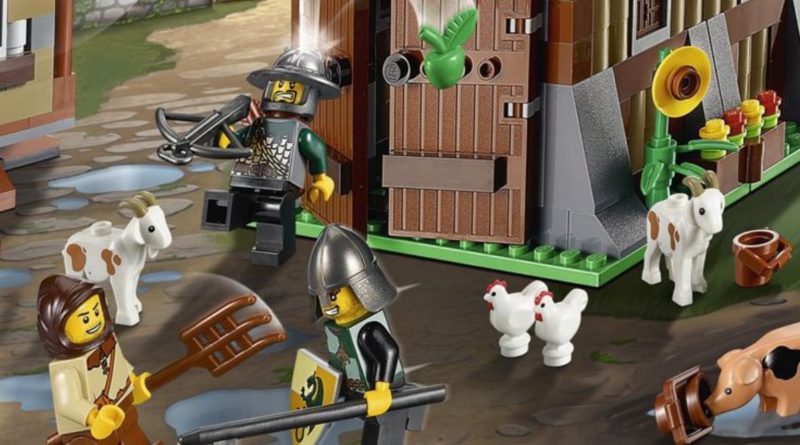 The greatest LEGO story of our time continues, as LEGO Ideas Design Manager Sam Johnson says the coveted goat could return one day after all.

We haven’t seen a minifigure-scale goat in a LEGO set since 2011’s 7189 Mill Village Raid, which was the one and only set to include the animal. What’s otherwise a fairly run-of-the-mill mould has since shot up in price on the aftermarket, leading to calls from across the LEGO community for the goat to return to production.

A huge opportunity to make that happen ultimately came and went in last year’s 21325 Medieval Blacksmith. While Clemens Fiedler’s original submission includes a goat, the final set swaps it out for a husky dog – a change attributed to the original goat mould being lost by the time that set entered production.

“We all know the goat is coveted, because of how quick it ran and how limited it was,” graphic designer Austin Carlson explained at the time. “The problem was that, with all the moulds that we have in the company, some of them have to be given up so we can make way for the new moulds. And [we had] such a big drought of not having any place to use a goat, so we’d lost the mould for that.”

For a while, then, it seemed like the LEGO Group would be unable to ever recreate the goat mould to the exact standard and specification of the original animal, and so any future goats – should they ever appear – wouldn’t be the same as their predecessors anyway. But LEGO Ideas Design Manager Sam Johnson has now hinted that that may not actually be the case.

Speaking to Brick Fanatics and other LEGO Fan Media about this year’s 21331 Sonic the Hedgehog – Green Hill Zone, Sam explained that the original Sonic minifigure mould – created for LEGO Dimensions – had been ‘deleted’, presumably just like the goat’s. Owing to the compressed design timeline for the 39th Ideas set, though, the team didn’t have time to create a brand new mould.

Thankfully, Dimensions’ Sonic minifigure matches the design of the classic character required for the set, which is based on the very first Sonic the Hedgehog game’s first level, the Green Hill Zone. And that meant Sam and the LEGO Ideas team could simply go in and resurrect that original Sonic mould.

“We were able to recut the mould,” Sam explains, “so the mould is made again for the set. We recut it and optimised it a little bit, and then looked at revamping it with brand new decorations and colours as well.”

It means the minifigure included in 21331 Sonic the Hedgehog – Green Hill Zone is, for all intents and purposes, identical – at least in shape – to the original character from 2016’s 71244 Sonic the Hedgehog Level Pack. But if the LEGO Group could do that for Sonic – despite the original mould being ‘deleted’ – couldn’t it do the same for the goat?

In the interests of LEGO and goat-based journalism, that’s exactly the question we put to Sam.

“There’s definitely a 3D file of it somewhere,” he says coyly. “So who knows, maybe there’ll be a return of the king. Or maybe one day you’ll see all kinds of new things and you’ll forget all about it. Sonic’s way cooler than a goat anyway.”

While it’s a very diplomatic response (which is par for the course for the LEGO Group, generally speaking), it does seem to confirm that the goat coming back isn’t off the table altogether. But it apparently won’t be in this summer’s rumoured CITY farm sets, and today’s reveal has confirmed it also won’t happen in 76208 The Goat Boat – so for now, the great goat saga goes on.