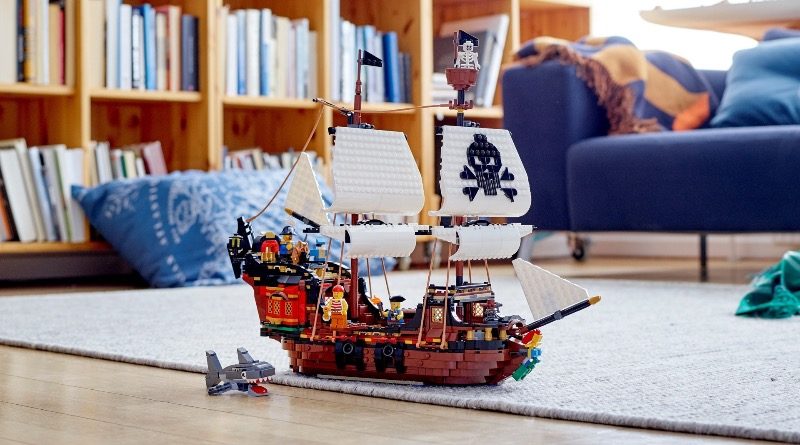 Creator 3-in-1 is the new home of classic LEGO themes like Castle and Pirates – at least according to the LEGO Ideas design team.

We’ve already seen some of the proof of that in last year’s 31109 Pirate Ship (and to a lesser extent in 31107 Space Rover Explorer and 31115 Space Mining Mech), but now LEGO Ideas Design Manager Sam Johnson has confirmed that Creator 3-in-1 is indeed where the company will revisit its retro themes in future.

Speaking during a recent roundtable interview with select LEGO Fan Media (including Brick Fanatics), Sam revealed that the LEGO Group is well aware of the nostalgia around classic themes like Castle and Pirates, but is currently looking for alternative solutions to resurrecting entire product lines.

“Pirates and Castle are pretty much the cornerstones of LEGO play,” he explained. “We’ve grown up with them, so we have this nostalgia – but since the late ‘80s or early ‘90s, LEGO has evolved a lot. And maybe there’s new homes for those themes that don’t necessarily mean that they have to have their own product line.”

Sam elaborated that Pirates specifically is a theme that’s often dominated by whatever ship is currently on the market, even at the expense of the rest of its products – whether those are fortresses, shipwrecks or treasure islands. And that may go some way to explaining why the LEGO Group opted to bundle three different pirate-themed builds into a single set in 31109 Pirate Ship.

“We don’t want to undersell any other ideas when we could include all three of those in one box, so Creator 3-in-1 has become a home for a lot of the generic LEGO themes,” he clarified.

One of those going forward could well be Castle, which – at least according to Sam – isn’t going anywhere long-term, even if we haven’t seen a traditional Castle line since 2015.

“Castle is one of those foundation themes of LEGO,” the designer explained. “It’s one of those themes that made LEGO what it is today, through people like us. And it’s timeless, so even though we haven’t done an entire theme, it doesn’t mean that we won’t do a Castle product now and again. There was a flying castle in The LEGO Movie.”

That 2014 model saw Star Wars’ podracers meet medieval fortresses in 70806 Castle Cavalry, but it still isn’t the craziest Castle-themed product the LEGO Group has come up with in recent years. That honour belongs to NEXO KNIGHTS, a range that fused neon sci-fi characteristics with elements of Castle for what Sam calls a ‘more modern play theme’.

“When we have something like that maybe we tone down on the classic [tropes], and now NEXO KNIGHTS is put away for a while we can concentrate more on classic LEGO, so these things may come up again,” he said. “And the characters come up constantly in the Collectible Minifigures. Castle is definitely not gone, and I’m hoping that in the near future you will be extremely happy. I don’t know if there’s anything coming, but I’m hoping!”

Creator’s spin on the Pirates theme launched just months after 21322 Pirates of Barracuda Bay in 2020, and ardent Castle fans are likely hoping Ideas will trigger another 3-in-1 follow-up this year with 21325 Medieval Blacksmith. According to Sam, that’s exactly what the Ideas team has in mind.

“Something we always hope when we do these one-off things in LEGO Ideas is that it will revive something and bring some kind of new opportunity for the LEGO Group. So what we were really hoping with 21322 Pirates of Barracuda Bay is that the real LEGO Pirates will come back and be where they should be in their prominent place.

“Now we have these cool Black Falcon knights [in 21325 Medieval Blacksmith], and that’s just a peek into an endless world of castle, so who knows what could happen?”