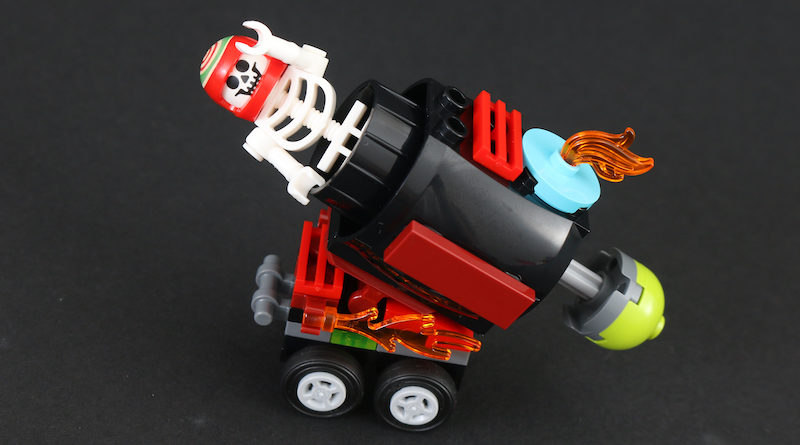 30464 El Fuego’s Stunt Cannon polybag is back available as a gift with purchase at LEGO.com and in LEGO stores from October 26.

The latest gift with purchase available at LEGO.com and in LEGO stores while stocks last is from the Hidden Side range. Running from October 26 to November 11, purchases over £35 / $35 will receive a copy of polybag 30464 El Fuego’s Stunt Cannon.

Centred around Hidden Side character El Fuego, stunt driver and high school staff member from Newbury, the build is a simple, small little creation offering up a mobile, four-wheeled cannon.

El Fuego, in skeletal form here, fits inside (just about with his legs only) and can be fired out by simply pulling back and then flicking the Technic axle at the rear end.

There’s not much to the polybag, but the blue marker at the top of the cannon hints at possible interactivity with the Hidden Side app.

El Fuego, also known as Douglas Elton, Elton Douglas, or Diego Diaz is the character included, less so in minifigure form than in skeleton form. This reflects a recent transformation within the LEGO theme, where he was drawn into the Hidden Side as part of a bid to stop the evil Lady E from escaping into the real world. After doing so, he reappeared in Newbury as a skeleton.

Interestingly, the ‘minifigure’ included here uses the uniquely printed red helmet piece for the character, but not his smiley skeleton face print, instead going with a generic skeleton head print.

As is usually the case with lower-value gift with purchase items, they make for a nice bonus for those intending to get them or with related interests. Likewise, for everyone else they’re reasonably disposable items that at least offer a nice introduction to a theme they may not otherwise have touched. Free LEGO is free LEGO…

30464 El Fuego’s Stunt Cannon is a simple little LEGO build that adds a bit of fun to an already interesting and colourful Hidden Side theme. Most who end up with this set may do so incidentally, and they’ll have little to complain about.