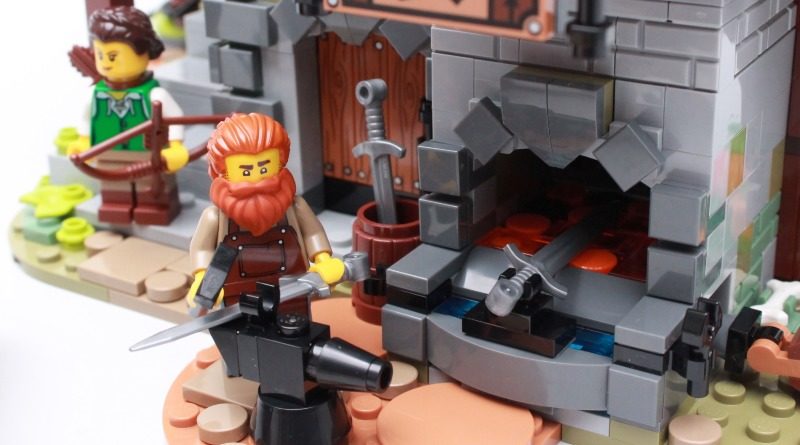 The biggest castle-themed LEGO set to date isn’t a castle at all – but 21325 Medieval Blacksmith is very much worthy of that accolade, while still leaving you wanting more in all the right ways.

Most, if not all, LEGO Ideas sets go through at least a few revisions between reaching 10,000 votes and arriving on LEGO Store shelves. That’s because the company’s design team are beholden to all kinds of rules and restrictions that don’t trouble fan builders – the way the model comes together, for instance, or the number, variety and type of parts that its budget allows.

At the same time, Billund’s brightest minds can often go further than fans, introducing elements in new colours, or dreaming up designs beyond our wildest imaginations. (There’s a reason they’re working for the LEGO Group, after all.)

21325 Medieval Blacksmith is very clearly the result of that push-pull in restrictions and freedoms coming to a head, diverging wildly from Clemens Fiedler’s original concept in all but the basic premise – but simultaneously turning it into an inviting model that has one foot planted firmly in the future of LEGO Castle, while still embracing all that’s come before.

In some ways, it’s like no other LEGO set available today; and in others, it’s exactly what you’d expect from a LEGO Castle set in 2021. The end result is a model you should be galloping to LEGO Stores (or LEGO.com) to buy as soon as it’s available.

Forgive us for yammering on about it with seemingly every 18+ set that rolls out of Billund, but we can’t let 21325 Medieval Blacksmith slip by without mentioning – once again – its lacklustre packaging. Look back to the beautiful artwork that adorned sets like 10193 Medieval Market Village and 10223 Kingdoms Joust, and then look to the Blacksmith’s dull black box, and wonder what happened to the LEGO Group’s championing of creativity.

In this case, that disappointing presentation also extends to the instructions, which feature an oddly-composed shot of the final set that slices off the very top of the roof. It’s a minor flaw given what awaits you, and you’re really here for the LEGO bricks anyway, but this is a premium set – as the price tag suggests – so you’d be forgiven for expecting a premium experience throughout, including in the instruction manual.

Thankfully, the actual assembly of 21325 Medieval Blacksmith more than lives up to those expectations. This is effectively the Middle Ages equivalent of a modular building, taking its design cues from the likes of 10278 Police Station with a style that’s slowly but surely spreading across the entire LEGO portfolio (just look at this year’s 80107 Spring Lantern Festival and 71741 NINJAGO City Gardens for the proof). You’ll begin by building out the ground floor, before moving on to each fully-enclosed – but removable and totally accessible – upper level.

That means this will likely be a familiar construction process for many, at least in how you advance through its 14 numbered bags. But it’s the specific techniques within that process that will keep you engaged and entertained, from the delicate (but satisfying) way the apple tree comes together to the intricate and carefully considered brickwork around the entire workshop.

Not a single stud of space is wasted, either: the ground floor is flush with equipment and raw materials, doing justice to the set’s name; the middle level – accessed by a stepped side entrance – contains a full kitchen and dining suite; and the top floor is jam-packed with a fireplace, writing bench, quilted bed, treasure chest and bearskin rug. It’s arguably even more detail than you’d find in a modular building, making efficient use of comparatively confined spaces.

And then there are the small touches that really bring the set to life: the bellows that trigger the light brick in the blacksmith’s forge; the well, squash garden and foliage that present just a hint at the surrounding landscape; and the knights travelling by wagon to collect their supplies. As with all the best LEGO sets, it uses its bricks as an artistic medium to paint a picture, to tell a story, and to bring you into its world.

All that said, your opinion of 21325 Medieval Blacksmith may end up resting largely on how much you enjoyed Clemens Fiedler’s design – particularly as you reach the final bags and begin assembling the roof. The layers of pentagonal tiles are a real departure from his original submission in both their use and colour, reflecting the wider design choices of the official set. Where Clemens’ model was doused in drab, dark hues, the colour choices employed by Wes Talbott and Austin Carlson are vivid and inviting, without being overbearing.

In fact, it’s really in the colours that 21325 Medieval Blacksmith most obviously demonstrates the difference between a fan creation and an official set – and in doing so, plants itself firmly in LEGO Castle territory, with a view to both past and (hopefully) future sets. It may be the largest castle-themed set to date, but the colours and design aesthetics mean it won’t look too odd next to the rest of your collection, and nor would it contrast too heavily with any forthcoming Castle line that may (or may not) be in the works – particularly given a wider theme would likely need to appeal to a younger subset of fans.

There are a couple of hang-ups to address that are trickier to be subjective about: the overhanging structure on the second level is pretty fragile during its construction, for example, while some of the colour differences in the instruction manual can be difficult to make out, despite the welcome move away from black paper. But they’re tiny niggles for a set that you’ll love putting together, and admire even more when it’s finished.

A simple price comparison doesn’t tell the whole story, but it’s also hard to see where more minifigures would have even fit in. We’ve got the blacksmith, naturally, along with a couple of soldiers to purchase his wares. And then there’s the female archer, presumably partnered to the blacksmith, although you can of course write your own medieval fable around this enchanting quartet.

The point is that you’ve really got everyone you need to fill out 21325 Medieval Blacksmith – any extra minifigures might have felt superfluous. (Not that we would have passed up the chance to bulk out a wider medieval setting, particularly given this is really the only castle-themed LEGO set on the market right now.)

Thankfully, the characters that are in the box are all incredibly well-designed: the blacksmith’s double-sided head communicates so much through just his eyes and brows, the rest being covered by his big, bushy beard; the archer’s squint has her ready to loose arrows into the apple tree’s target; and Classic Castle fans will find a lot to love where the knights are concerned, because they’re bringing the ‘80s back in style. You can try to take quarrel with their oversized NINJAGO-style armour, but it’s easily removed.

21325 Medieval Blacksmith will also add another couple of animals to your collection: a horse with movable legs that’s brand new in tan, and a decidedly out-of-place Siberian husky dog. We’re always happy to say hello to more pooches (even if they are made of plastic), but we dearly hoped Clemens Fiedler’s original pitch of a goat would have materialised in the final set. Even if it wasn’t to be, we’re still pretty satisfied with the character line-up here.

So: yes, it’s very much the price bracket required to do justice to Clemens Fiedler’s original design, if you’re happy with the compromises that the LEGO Group has made to bring it to life as an official set. Or: no, it should have been even bigger, and even more expensive, in order to properly deliver the huge, complex blacksmith that Clemens constructed – but that would likely have been at the cost of ensuring 21325 Medieval Blacksmith plays well with your wider LEGO Castle collection, and potentially at the cost of many fans being able to afford it.

On balance, then, this really feels like the perfect middle ground, particularly with a view to the Ideas theme’s ever-growing library of enormous sets, like last year’s 21323 Grand Piano and 2019’s 21318 Tree House. It also feels like very good value for money when you have the final model in front of you, especially given its impressive dimensions: fully-built, 21325 Medieval Blacksmith stands 27cm tall, 27cm wide and 21cm deep.

You won’t fly through the build, either – not because it’s incredibly complex, save for those fiddly, less structurally sound moments, but because you’ll enjoy savouring every step in what’s a real rarity of a LEGO set. For Castle fans who’ve been without a decent official model since 2013, £134.99 / $149.99 will be no obstacle to picking up 21325 Medieval Blacksmith.

21325 Medieval Blacksmith is packed with the kind of detail and techniques that are representative of the LEGO Group’s very best models, and even where they feel tried and tested – like in the tiles that connect to bricks with side studs on the chimney – it’s still refreshing to see them finally applied to a castle-themed set. And it’s really that specific application that makes this set stand out so brilliantly within the LEGO portfolio, because you genuinely feel like you’re diving into a medieval world that embraces all that’s great about LEGO today.

It’s essentially the same effect that 21322 Pirates of Barracuda Bay had on the classic Pirates theme: for all that adult fans wax lyrical about ‘80s and ‘90s sets, their designs can’t really hold up to the complex and assured models that the LEGO Group puts out today. But 21325 Medieval Blacksmith transports the Classic Castle theme firmly into the current golden age of LEGO, leaving us yearning for even more – and that’s when you know you’ve got a great set on your hands.

You can support the work of Brick Fanatics by ordering your copy of 21325 Medieval Blacksmith from LEGO.com (once it launches!) using any one of our affiliate links.