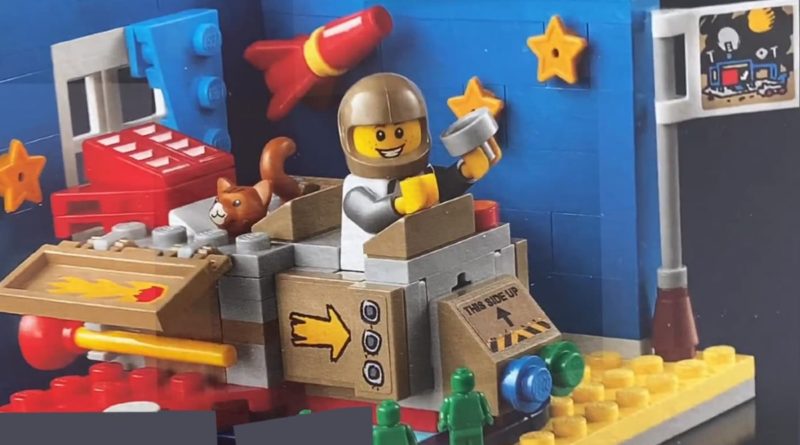 The final design of the contest-winning LEGO Ideas The Adventures of the USS Cardboard GWP has been revealed early by a retailer.

StoneWars has spotted on JB Spielwaren’s Instagram page that the retailer has received an advance copy of an upcoming LEGO Ideas gift-with-purchase. In 2021, The Adventures of the USS Cardboard won a LEGO Ideas contest to be transformed into a future gift on the official online store.

Since then, we’ve heard nothing official about the GWP, but now thanks to the retailer, we have our first look at the set. It’s reported that the model was teased on JB Spielwaren’s Instagram story, though it is no longer live on the account. StoneWars has pieced together the images, showcasing the final version of the build.

It strongly resembles the original design, with a diorama of a room featuring stars and a rocket on the wall. In the centre of the build, the USS Cardboard is depicted, but not with the LEGO Group’s logo as originally suggested. The Pizza Galaxy flag has also been replaced by what appears to be a reference to a Classic Space set – 926 Command Centre.

Another image seems to suggest that the robot minifigure included in the original design has been replaced by a brick-built mech for a teddy bear. This teddy bear was also included in the initial project as well as a cat and child minifigure – all of which are featured in the GWP.

No official information regarding the release date or price threshold for this build has been revealed by the LEGO Group yet, though the retailer receiving an advance copy suggests that an official announcement might be coming soon. Currently confirmed for a deal in May is 40529 Children’s Amusement Park.