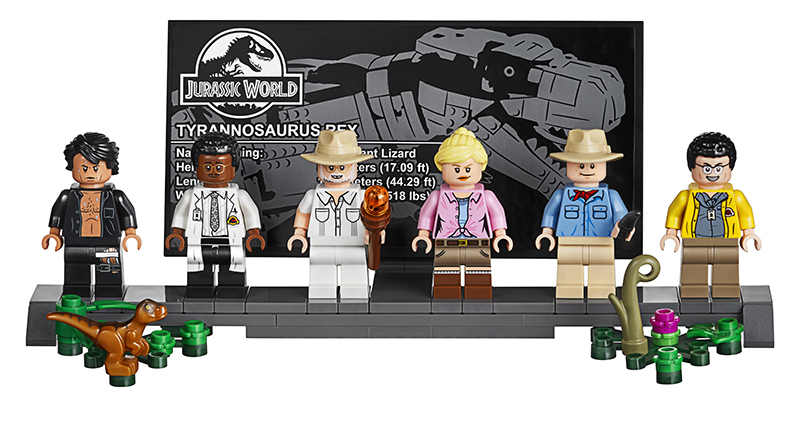 LEGO Jurassic World 75936 Jurassic Park: T. rex Rampage is one of the year’s largest and most impressive models. It offers a distinctive display piece in a scale not often represented in licensed LEGO themes.

It does not eschew minifigures entirely though, and Senior Model Designer Mark Stafford placed little vignettes into the back of the gate structure, so fans can recreate classic Jurassic Park movie moments.

Here, the talented designer explains what fans find hidden within the model…

“At the top of the gate I put in the forest floor so Alan Grant can find that life has found a way, as Ian Malcolm told him it would.”

“Here we have the mudslide, with the shaving foam buried in the mud for Dennis.”

“We have got ice cream and jello in the restaurant. I sat there watching this movie so many times… he is eating the ice cream because the power is out and everything is melting. In that scene when they pull back, the fans above him on the ceiling are spinning around and it annoys me now that I noticed it – the power’s out, why are the fans working?”

“We’ve got the Ian Malcom scene here, the injured look of him. Looking at that scene and looking at the background, there are shelves with all the stores and the spare food.”

“The toilet is included of course. I wish Gennaro, the lawyer, was here.”

“Then we’ve got Ray’s computers, because the computer system going down is a major part of it, we put the blue screen of death in here, we’ve got the storm coming towards the island, which drives the whole narrative.”

“Here we have got the switch room for turning the gate back on, so there is the primer and pump at the back. I was trying to get the right number of lights there for the number that she actually switches, I had to make sure I had the dots in the right place – they are much bigger than in the film. We have got this sort of armless thing there, which I don’t want to say much about…”