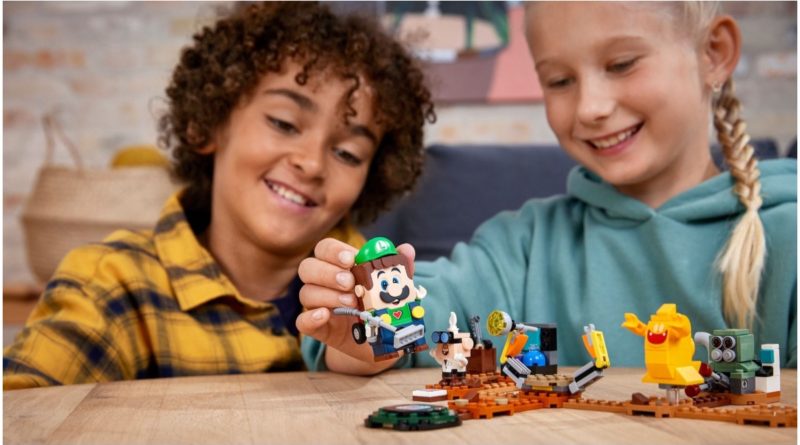 The LEGO Group gave us a nice surprise recently with a LEGO Super Mario Luigi’s Mansion announcement – but how does it compare to the games that inspired it?

We’ve already got a good look at the new Luigi’s Mansion sets. Three have been announced so far, and include a number of characters from the original video games. These include Professor E. Gadd, a friendly Polterpup, and plenty of other ghosts including a new King Boo build.

However, Luigi’s Mansion is very different to Super Mario in terms of gameplay. While many Super Mario games are straightforward platformers, Luigi’s Mansion is more of an action adventure game. Luigi must creep through a series of haunted houses, catching ghosts, solving puzzles and uncovering hidden items. As such, the game’s core mechanics have been translated into LEGO with varying degrees of success.

Right from the start, the LEGO Luigi’s Mansion sets capture the atmosphere of the games well. 71399 Luigi’s Mansion Entryway features an imposing entrance to a haunted house, with gates, doors and spooky blue flames. A tile allows Luigi to react with trepidation to the mansion’s opening doors… and cry out in panic when they slam shut. Polterpup – a friendly presence in the games – can be greeted for a coin bonus, and coins are also a common collectible in Luigi’s Mansion.

Luigi’s ghost-catching gear is also included. 71397 Luigi’s Mansion Lab and Poltergust features a new overalls piece, which a Poltergust can be attached to. In the original games, Luigi uses this and a flashlight to defend himself and uncover magically-concealed items within the mansions.

A particularly nice touch is the gems hidden within 71401 Luigi’s Mansion Haunt-and-Seek. In addition to various coins, notes and gold bars, Luigi can find a number of gemstones scattered around each mansion. These are normally more difficult to find; collecting a full set tests even the savviest of explorers.

A key part of Luigi’s Mansion is catching ghosts themselves, and the LEGO version seems to recreate this with mixed success. Pressing a button on Luigi’s stomach appears to activate a new input; then moving Luigi in proximity to a ghost rewards the player with coins, but the tug-of-war aspect from the games is absent. While attacking ghosts without a Poltergust doesn’t seem to work, it’s still a notable deviation from the source material… especially since King Boo doesn’t seem to need a Poltergust at all.

The time limit is also an unusual feature. While they’re a staple of Super Mario games, Luigi’s Mansion doesn’t include them during the course of normal gameplay. You can naturally ignore this while playing, but given the regular nudges towards playing within the rules, it’s a shame a more accurate mechanic couldn’t have been introduced.

Finally, the goal flag doesn’t fit with the broader Luigi’s Mansion gameplay – especially since Bowser isn’t in it at all. The first game had you defeating ghostly bosses for keys to new areas, while the second introduced a mission-based style of gameplay. Upon completing a mission, Luigi would use a ‘Pixelizer’ – a camera-based teleportation system – to return to safety. It would have been fun to see a LEGO Pixelizer screen, even if it’s a relatively obscure reference.

On balance, probably not. Most of the LEGO Super Mario fanbase are on the younger side, and won’t have played many of the games that inspired the LEGO sets. It’s also likely that – given how long LEGO Super Mario took to develop – the designers had neither the time or ability to deviate from its core ideas. Still, considering the attention to detail, it’s a shame that didn’t fully extend to the core ideas of the Luigi’s Mansion games.

If you’d still like to embark on your own ghost-catching adventure all three sets will launch on January 1, 2022. You can also read our thoughts on which other Super Mario spinoffs need LEGO sets.