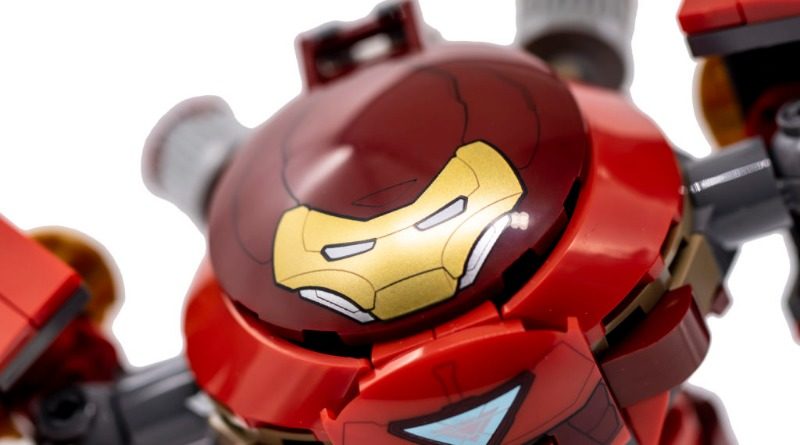 LEGO 76164 Iron Man Hulkbuster versus A.I.M. Agent is the largest Marvel mech in this price range to date, but does bigger always mean better?

There have been several minifigure-scale models of Iron Man’s Hulkbuster, most taking inspiration from the Marvel Cinematic Universe. What’s interesting about this particular rendition is it appears to be based more on the comics than the films, bearing more than a passing resemblance to the Hulkbuster first seen within the pages of Iron Man 304 back in 1994.

As a result, fans of the film franchise might not be accustomed to the flatter-looking head, and indeed this set has drawn criticism as a result. Looking past that, though, LEGO 76164 Iron Man Hulkbuster versus A.I.M. Agent is actually very accurate to its source material, as well as being an incredibly enjoyable build.

This rendition of Iron Man’s Hulkbuster not only separates itself from other models by being based upon the comics, it’s also the most expensive and largest mech in this price range. As a result the build feels a lot more interesting than past models.

Starting with the head and torso section, within which sits the cockpit, it becomes evident early on that this is a model that demonstrates how clever parts usage can create beautiful and effective shaping. Dark red arches, curved slopes and red 3x6x1 windscreens seamlessly blend the cockpit and head. The smooth lines continue throughout the rest of the torso through the use of dark red 1×1 slopes, 4×1 sloped curves, 2×2 sloped curved tiles and two red mudguards, which fit perfectly around the waist. It’s actually a very satisfying start to the building process.

The headpiece is hinged allowing access to the cockpit and, while it does appear quite flat, the printing looks excellent. The printed chest piece also helps with creating a look that’s very smart. The colour scheme, which continues throughout, ties in with Iron Man’s familiar colours of red, dark red and pearl gold. The pearl gold elements in particular look incredibly striking.

The legs of the mech are constructed in three stages: the thighs, knees and feet. As with the torso, each stage is satisfying to construct, with nice shaping achieved through the use of 2×2 curved tiles, 2×3 shields, 1×2 slopes and pearl gold curved wing ends. They all connect together in a way that looks mechanical, and the use of dark grey skeleton arms used as rear connections for the knee joints look really effective. Compared to other mechs there is a surprising amount of detail at both the front and rear of the leg sections, adding to the overall appeal of the finished design.

The arms are constructed using the same technique as the legs, with the shoulders and elbows connected via ball and socket joints. The shoulder blades’ sub-assemblies feel robust and are appropriately sized. The pearl gold 2×2 macaroni corner pieces are a wonderful addition, and help create a very striking look. There is a separate shooter turret included, which can be placed on either shoulder. Iron Man can pilot the mech while Rescue mans the turret to take on the A.I.M. agents.

The last portion of the Hulkbuster to construct is also the most interesting. The hands are a wonderful design, using 1×2 curved slopes for fingers and thumbs, which are then connected to a pearl gold 1×2 angled bar with handles on the side. They allow for a surprisingly realistic motion and give the mech an impressive grip. Repulsors are represented by 2×2 trans-light blue dishes connected to the insides of each hand.

Overall the build comes together in a very satisfying way throughout the entire assembly. Due to the nature of the design, there is a slight amount of repetition as both the legs and arms are constructed in an identical manner, but neither feels particularly tedious to build. The finished model looks excellent, and stands at 16cm tall. When placed next to a minifigure the model has an imposing sense of scale – the Hulkbuster towers over the A.I.M. agents.

A larger model has also granted the designers the scope to add more articulation than in previous mechs. The waist can rotate through the use of a 4×4 turntable, while the legs, hips, elbows and shoulders allow movement both vertically and horizontally, offering some excellent posing options.

Of the four included minifigures, only Rescue is exclusive to this set. The two A.I.M. agents have the same printing found in other 2020 releases, but their added accessories are unique to this set.

Rescue’s red and metallic silver colour scheme really pops and looks striking. There is excellent detail printed on the helmet, torso and legs. The helmet does not open, but she still comes with two facial expressions, a smile and a grimace.

Iron Man is the same minifigure found in two other 2020 sets, 76140 Iron Man Mech and 76166 Avengers Tower Battle, but this is still an excellent rendition of the armoured superhero. Dark red, red and gold printing on the helmet, torso and legs are beautifully done, and he compliments his giant mech incredibly well.

Every superhero needs some villains to battle, and in this set that role is occupied by two A.I.M. agents. One comes equipped with a very smart jetpack build, complete with flick-fire missiles. The second comes with a very slick brick-built rifle and tripod. For a minifigure accessory it’s a very cool build, modifying a black double-barrelled pistol with gun metal grey lightsaber hilts and a black candle piece for the barrel. The design of both agents has been used in several other LEGO Marvel sets, but the inclusion of the mounted rifle and jet pack make these two novel enough to be a worthy inclusion.

While 76164 Iron Man Hulkbuster versus A.I.M Agent might be the most expensive mech in this sort of price range, it is also the largest by some way. The building experience is incredibly fun, the final model looks very impressive and the exclusive Rescue minifigure all help to make this set feel like money well spent.

Overall LEGO 76164 Iron Man Hulkbuster versus A.I.M Agent is a very enjoyable model to put together. The shaping is very clean, sleek and smart, and the clever details throughout help create a sense that this is a real, mechanical object. The articulation the model offers allows for some really cool poses and the grip that can be achieved with the hands is very impressive, giving the final model excellent display and play possibilities.

The colour scheme is striking and the few stickers included really add to the overall look of the final model. The inclusion of two A.I.M. agents alongside the heroes Rescue and Iron Man also allow for some epic battles to be played out. The build and the final model make this set a must-have for Iron Man, Marvel and mech fans alike.