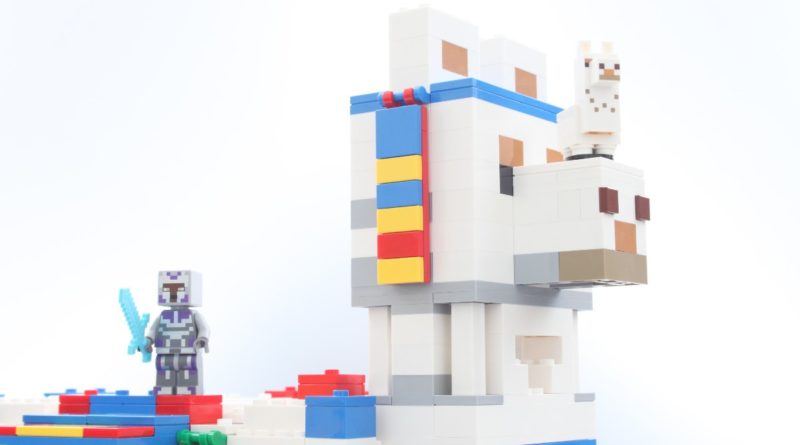 We’re not sure who asked for a giant LEGO Minecraft llama, but 21188 The Llama Village is just that – and not much more.

21188 The Llama Village is about what you’d expect given the name, consisting of a surprisingly huge brick-built llama and an array of additional builds that make up the village portion of the set. Since being added to Minecraft in update 1.11, these creatures have received various changes over more recent updates, including the option to add a wool coat to them in a variety of colours.

It’s the blue version of these trader llamas that serves as the inspiration for 21188 The Llama Village, which will surely be a must-have LEGO Minecraft model for llama enthusiasts. However, it might be somewhat strange for those not accustomed to the giant animal builds that this theme’s team is so fond of.

The vast majority of the bricks in this set go towards the huge llama model, though the village section doesn’t fall too short on content either including a small farm, covered pen, a trading area, a blacksmith and a well.

None of these individual assemblies can compare to the massive size of the towering llama, as their minimalist details and scale instead serve to emphasise the llama’s size. On their own, they don’t make up much of a village, but they’re designed to be supportive of the main attraction. However, that also means that you need to like llamas more than most for 21188 The Llama Village to appeal to you.

Moving on to the llama itself, it can’t be understated quite how big it is when built, as half of each leg is left unbuilt with the piece count going towards the rest of the model, without interfering with structural integrity or the look of the llama. This also makes it a lot easier to reconfigure the model into a shorter animal-based mansion.

The details on the outside of the llama include a few sections that keep with the style of the trader llama design. One example of this is the balcony on either side, looking like a chest that can be equipped on the animals in-game, but with a hint of blue and yellow on top to match the colour scheme. It’s evident that a lot of thought has gone into this build and at no point during construction did it feel repetitive.

There are several fun details packed into the exterior of the llama, such as a spitting function that is almost invisible when viewed from most angles. The ammunition is camouflaged into the top of the head well and fits perfectly into the provided slot, meaning you won’t need to worry about storing an extra water block somewhere on the model.

Opening up the llama, the interior is fully accessible and has room for two minifigures to live. The usual artistic liberty is taken with the furniture but it makes for more interesting furnishings, especially the aquarium in the neck – every space in this llama is used to full effect. The top of the model also presents a great amount of space for displaying additional builds, minifigures or whatever else you have in mind. It’s plain, but that’s the point.

As well-designed as this llama is, there’s still one glaring issue with the majority of this set – most of the piece count goes towards the huge animal recreation. There’s not much of a village despite the set name of 21188 The Llama Village, but an effort is still made to create one. Every element of the model works well together, with the smaller sections of the village serving to make the llama appear grander and larger than it already is.

However, you simply can’t escape the fact that this build is still so extremely specific and strange to the point that only those who love Minecraft llamas will benefit from adding it to their collection. Anyone else simply wanting to expand or create a village has better options available to them within LEGO Minecraft.

Even the minifigures are intently focused on the llama, with the llama herder, llama knight, savannah villager, blacksmith villager, and two pillagers. Add on to that the llama, baby llama and pink lamb and it makes for a very good variety of characters made up of rarer or exclusive figures for LEGO Minecraft.

As much as the llama warrior echoes the animal theme of the set, the armoured character is just as applicable to other settings and the purple provides a good splash of colour that mixes well with the metallic design.

Two villagers feels about right considering the size of the village section in the set, though an expansion to them – and the portion of the build – would still have been appreciated. However, that may have been out of the realm of possibility with the scale the LEGO Minecraft team chose for the llama.

One annoying aspect in this set is that the blue-coated trader llama that the build is based on, featured in 21167 The Trading Post, does not reappear here where it would make almost too much sense. We’ve provided images of the figure beside the model for comparison, but note that only a white baby llama and a brown llama are featured in 21188 The Llama Village.

Those looking for an expansion or the start of a village for their LEGO Minecraft collection would be better off sourcing minifigures and models from less expensive sets such as 21160 The Illager Raid or 21187 The Red Barn. However, anyone searching for a llama tribute will find exactly what they’re looking for in 21188 The Llama Village.

For a LEGO Minecraft set called 21188 The Llama Village, it might have been better named just The Llama, considering that one aspect of that name is more of a priority than the other. That’s not necessarily a bad thing, as the llama itself is executed very well, including plenty of details to appreciate in a sizeable model.

It ultimately means, though, that this model is going to have a more limited audience than other Minecraft sets, as a huge brick-built llama with a high price tag of £114.99 / $129.99 / €129.99 will appeal mostly to those who have an affinity for the animal or have been diligently collecting the animal recreations in the theme.

21188 The Llama Village is a great set, you just have to like llamas more than the average person. Those hoping for a village expansion are better served elsewhere in LEGO Minecraft.

How long does it take to build LEGO Minecraft 21188 The Llama Village?

You’ll want to make time for around two hours and 10 minutes to build 21188 The Llama Village, or slightly longer if this is one of your first builds.

How many pieces are in LEGO Minecraft 21188 The Llama Village?

Within the box of 21188 The Llama Village, you’ll find 1,252 pieces to make the llama, village and all nine characters.

How big is LEGO Minecraft 21188 The Llama Village?

You’re going to need a fair amount of space for 21188 The Llama Village as the model in its initial configuration measures 31cm high, 30cm wide and 30cm deep. Even after changing around the modules, you’ll find that height is the main issue to deal with.

How much does LEGO Minecraft 21188 The Llama Village cost?