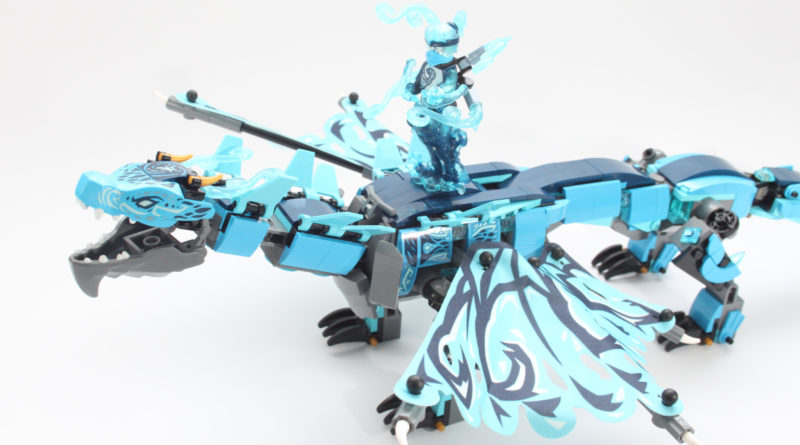 LEGO NINJAGO 71754 Water Dragon compresses the Seabound wave into a single set, but will it go with the flow enough to impress?

Whether in brand new designs or updated version of classic models through its Legacy range, NINJAGO has no shortage of dragons. These fantastical beasts span more typical representations through to supernatural elemental iterations like fire, water, ice and more.

In what has become a regular occurrence in the annual NINJAGO waves, a dragon is included in Seabound – this time, for the master of water Nya. It’s a first for the character, but does this initial iteration of the Water Dragon miss the mark when it comes to the theme’s long and storied history of brick-built creatures, or is it something unique that every NINJAGO collector needs?

Fittingly for its name, the main build of the 71754 Water Dragon is an aquatic beast with a pair of fabric wings. The dragon features a brick-built head that uses two new elements to represent the jaw and crown accordingly, with detailed designs to represent scales and a pair of glowing eyes.

While the jaw is only held in place with a pair of LEGO Star Wars droid arms – meaning that it can open wide for a fierce roar – the crown features a sticker displaying an emblem that appears frequently throughout the set, presumably to represent the element of water. A pair of golden horns and curling tendrils of water are also included on the head, the former contrasting with the striking blue colour scheme.

The stand-out feature in the model is the pair of moving fabric wings, which are undoubtedly beautifully designed. However, though it may look impressive in images, the actual effect feels underwhelming, with limited articulation across only the central spine of the wings. In fact, the movement would be better described as fluttering than flapping.

Compared to other recent NINJAGO dragons and their poseable wings, the same aspect of 71754 Water Dragon looks more impressive than it actually is, but is likely to suffice in play.

The other features of 71754 Water Dragon include poseable legs, head and neck as well as a swinging tail, which also allows for articulation in the back portion of the body. The tail is decorated with minifigure flippers as fins and more water tendrils at the end, keeping with the colour scheme of the rest of the dragon while still feeling unique compared to the body.

There are also two much smaller builds to accompany the dragon, including a temple to display and store the Wave Amulet, which uses a specialised element that first appeared in NINJAGO’s The Island sets as the Storm Amulet. Intricate moulding of Wojira is featured alongside moulding of blue and gold.

The shrine won’t draw your attention over the dragon or even the submarine, though it serves its purpose as an adequate aquatic stand for the key item of the season.

Zane can join in the battle against Prince Kalmaar and the Maaray Guards thanks to a small submarine, with a spinner topper as the propellor and a pair of ski poles for blasters at the front.

The large cockpit element first introduced in 71736 Boulder Blaster also appears in the submersible, with the circular design depicted on the front acting as a porthole to fit in with the aquatic theme of 71754 Water Dragon.

Five minifigures are included in the set, with two only appearing in a pair of sets across the Seabound wave.

Prince Kalmaar isn’t one of them, though, as the latest villain to threaten the land of NINJAGO also appears in 71755 Temple of the Endless Sea and 71756 Hydro Bounty. With two new pieces for the head and mass of tentacles in place of legs, though, it’s obvious why the LEGO Group is so keen to re-use him.

The printing on this minifigure is nothing short of astounding, and the mix of purple, blue and gold blends together perfectly to create a minifigure that is intimidating through design rather than colour. This fits with the story of the Seabound season where Kalmaar leads the people of Merlopia as their king, and a darker tone of colours with malevolent imagery might have given the Merlopians the wrong idea.

Overall, Prince Kalmaar might not be the kind of NINJAGO villain that we’re used to, but represents the theme’s growth, with a budget that now allows for specialised pieces to make each one feel as unique as the seasons they feature in.

Joining Seabound as the annual soldiers for NINJAGO in 2021 are the Maaray Guards, with the water-based enemies featuring a mix of black skin and teal scales, as well as a pair of fins on their feet. Two of these minifigures are included in the set, with weapons that use the dragon hilt with a different accessory on top.

Nya is likely to be the most tempting minifigure in 71754 Water Dragon, with an NRG form that only appears otherwise in 71755 Temple of the Endless Sea, making this the most cost-effective way to get her.

NRG Nya is a gorgeous minifigure featuring a water-based design on the torso that carries on to the legs, combining with the translucent arm element that first debuted as part of Hidden Side. It has been retooled here to exaggerate the way that water has overtaken Nya in this energy form.

Zane is on hand to support Nya in the battle against Prince Kalmaar, with a new minifigure for 2021 that introduces two new elements for the theme to suit the underwater environment. Despite Zane being a Nindroid, the minifigure still includes the breathing apparatus pieces, which consist of a dual-moulded hood with goggles and an interesting brick that attaches around both the neck and hips.

The latter represents an oxygen tank with room to hold a sword. Attaching to both the neck and hips makes it annoying to remove, but the additional detail it provides makes it worthwhile. That said, it’s hard to see where this element could be used outside NINJAGO (unless the LEGO CITY divers are trained in swordplay).

With 747 pieces for £59.99 / $69.99 / €69.99, the price of 71754 Water Dragon is great value in terms of the price-per-part ratio, and the size of the models that are included feel worthy of that cost too. The Water Dragon with NRG Nya and Kalmaar alone would be worth the asking price, so the addition of more minifigures and builds only helps to increase the value.

Compared to other NINJAGO Seabound models, 71754 Water Dragon represents an excellent deal with an assortment of the wave’s new elements and important minifigures in one package. Even when stacking up against other NINJAGO dragon builds, the Water Dragon still manages to hold its own thanks to its length and unique fluttering play feature.

NINJAGO Seabound takes the theme in a new direction, as the heroic team heads beneath the watery surface that has surrounded their home for the past 10 years, and the season’s corresponding sets have the important task of mirroring this in the models. 71754 Water Dragon is up to the challenge though, thanks to the theme’s first undersea dragon being a great display piece that showcases the power that Nya has always held.

For those aiming to only get one NINJAGO Seabound set, 71754 Water Dragon is a great place to start, with all of the theme’s new 2021 bricks and most notable minifigures with a range of builds that represent great value. Unfortunately, the disappointing action of 71754 Water Dragon’s main function cannot be overlooked, as it lacks enough movement to be as impressive as the wings of other NINJAGO dragons.

Despite this, 71754 Water Dragon is an excellent introduction to Seabound, with a colour scheme where no part feels out of place thanks to the blending of bright colours with natural tones such as grey and black. Pair that with a collection of rare minifigures and 71754 Water Dragon shouldn’t be missed, even if you already have a growing menagerie of brick-built dragons.

How long does it take to build LEGO NINJAGO 71754 Water Dragon?

LEGO NINJAGO 71754 Water Dragon should take you around an hour and a half to build, which is about right for a set at this price.

How many pieces are in LEGO NINJAGO 71754 Water Dragon?

LEGO NINJAGO 71754 Water Dragon includes 737 pieces and five minifigures. None of them are unique to this set, but they’re all very desirable.

The main build of LEGO NINJAGO 71754 Water Dragon is 61cm long when the tail is straight, 14cm high and around 25cm wide. The length is definitely one of its strengths.

How much does LEGO NINJAGO 71754 Water Dragon cost?