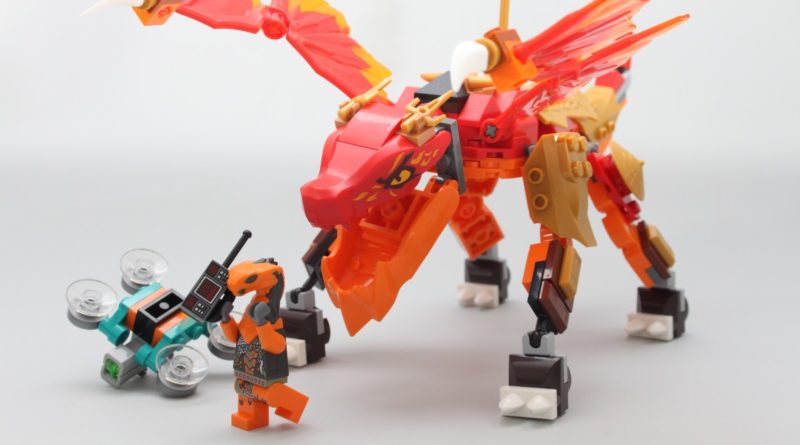 The latest flame-fuelled dragon from LEGO NINJAGO skews towards a younger audience, but older fans might still have a reason to pick up 71762 Kai’s Fire Dragon EVO.

Following in the footsteps of the 8+ 71753 Fire Dragon Attack from 2021, 71762 Kai’s Fire Dragon EVO is this time targeting ages six and up, though you wouldn’t immediately think that when seeing the set in person.

Unlike other models in the new LEGO NINJAGO Core wave, 71762 Kai’s Fire Dragon EVO might surprise you with its details and how it integrates the new, evolving feature that is part of almost every set in the early 2022 range.

Most of the pieces in 71762 Kai’s Fire Dragon EVO go towards the creature itself, with three variations to build one by one in the instructions, showcasing the EVO part of the set name as the creature morphs and changes to better suit the battle ahead.

Whether this means an extended body or pair of flaming wings, the fire dragon isn’t the most impressive creature at first, but with time, experience, and a few more bricks can grow into something a bit more appealing.

Beginning with the smallest form, the dragon feels short and stubby, with a head that is not proportionately sized to the rest of its body. Thankfully, this can soon be fixed by progressing to the next stage of its evolution, with a single piece extending the body being enough to make this creature seem suitably sized. Add to that a longer tail and a small pair of wings, and while this dragon might not be flying just yet, it’s a lot more intimidating.

The final form of the fire dragon is likely going to be your preferred option, with added armour, a saddle, bigger wings and a jet of flame bursting out of the tail. From the pearl gold pieces to the exclusive banner design, every aspect plays into the dragon’s colour scheme and design, helping to accentuate its most important features.

It’s not all good news for 71762 Kai’s Fire Dragon EVO, though. Despite how much the dragon changes throughout the evolutionary stages, one problem persists: the beast is just too flat. Despite a wedge element giving off the appearance that the underside of the dragon is shaped and sculpted, the hollow surface of bricks is all that awaits underneath.

While this is not going to be the most visible area of the animal, it’s a bit disappointing considering how every other part improves with each step of the model, although it’s likely to be less of an issue for its target audience.

Facing off against Kai and his winged companion are two snake warriors, armed with technology such as a jetpack and a drone – both of which help to add play value to the set, and are notable for their use of bright colours and functions, despite their smaller sizes.

In a set named 71762 Kai’s Fire Dragon EVO, it’s expected that the ninja of fire would be included, as he is here with a new outfit for the 2022 range. A flame-like design dominates his left side, offering a contrast to the otherwise red uniform. The inclusion of both a mask and hair piece is appreciated too, and ideal for those who are new to the theme. The featured chicken leg also fits well with the story present in the instruction manual and adds play value for younger fans.

The two snake minifigures feel just as appealing as Kai, with patterns and designs that differ between them. Anyone hoping to own one or more of the LEGO NINJAGO Core wave will collect quite a few of these and in that respect, these repeating simplistic designs may be an annoyance compared to the variety present in recent NINJAGO ranges, such as The Island. That said, there’s nothing wrong with them, and they don’t detract from the rest of the set.

Without comparisons to the wider theme, these minifigures do well to support the main model and feature accessories relating to their respective builds, including a remote control for the drone and the winged jetpack. Considering that the new wave is aiming to bring in a new audience to NINJAGO, that mission should be fulfilled just fine with these minifigures.

It’s worth remembering that the price-to-piece ratio is not always an accurate reflection of value, however, with two exclusive dragon head pieces and the four new, rare wing elements helping to increase the value of 71762 Kai’s Fire Dragon EVO.

Much like LEGO NINJAGO 71760 Jay’s Thunder Dragon EVO and as mentioned in our review of that set, 71762 Kai’s Fire Dragon EVO’s build skews it heavily towards the target audience presented on the box of ages six and up. However, the final, fully-armoured model offers something a little different to the other 6+ dragon set of this new wave.

Those hoping for a complex and intricately-detailed version of a fire-based beast should look towards 71753 Fire Dragon Attack (provided you have the budget), but anyone looking for a cheaper – but still impressive – model of one of NINJAGO’s staple creatures won’t be let down by 71762 Kai’s Fire Dragon EVO.

Just remember that the intended audience for the set may be younger than the usual NINJAGO builds, and you might find enough space on your shelf for the delightfully simplistic and transformable 71762 Kai’s Fire Dragon EVO. The dragon banner print might persuade you to give it a go, too…

How long does it take to build LEGO NINJAGO 71762 Kai’s Fire Dragon EVO?

LEGO NINJAGO 71762 Kai’s Fire Dragon EVO will take you between 30 and 40 minutes to build, depending on your familiarity with LEGO or NINJAGO.

How many pieces are in LEGO NINJAGO 71762 Kai’s Fire Dragon EVO?

LEGO NINJAGO 71762 Kai’s Fire Dragon EVO includes 204 bricks and three minifigures, several of which are exclusive to the set.

The main, fully evolved model is 32cm long from head to tail, with a wingspan and length that can be adjusted to fit it wherever you have in mind.

How much does LEGO NINJAGO 71762 Kai’s Fire Dragon EVO cost?