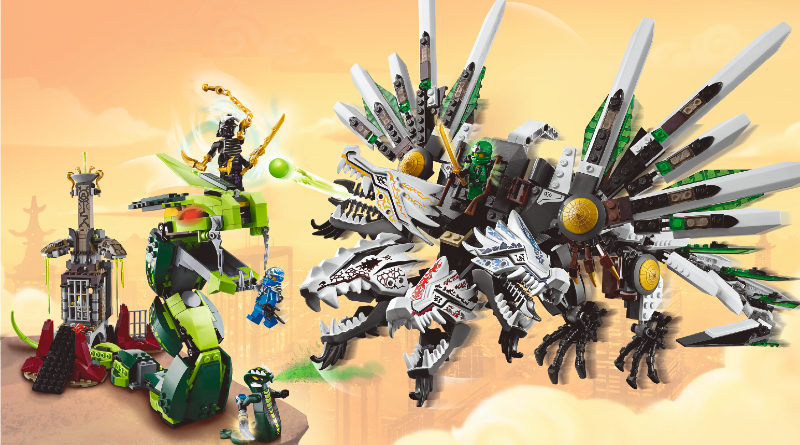 LEGO NINJAGO is 10 years old, so there’s no better time to look back and discover the origins of the theme, this time focusing on a Serpentine plot.

Continuing in our series of features exploring the history of LEGO NINJAGO, it’s time to focus on the first proper season of the show. The LEGO Group has provided some concept art and set prototypes, giving a glimpse into how the second year of the theme came to be.

Rise of the Snakes was the name of the first season, with the theme introduced, and the ninja team formed. The story began with reports of the pilot villain, Lord Garmadon, making a return in a nearby village. Worried at the news, the ninja rushed to Jamanakai Village, only to find a younger and bratty Lloyd Garmadon demanding candy, introducing the iconic character.

Lloyd would quickly become a focus of the season, starting as an antagonist to the ninja team. Through a complete accident, he gained control of an army of Hynobrai Serpentine, a race of snake-like humanoids who were once the dominant species of NINJAGO before being sealed away.

These wouldn’t be the only tribe of serpentine to appear, however, with five in total making their debut. Anacondrai, Hypnobrai, Fangpyre, Constrictai, and Venomari were the five tribes, all with their own unique abilities to sabotage the ninja.

In this concept art for the tribes, we can see a flame-filled and hypnotic race of snakes, the latter of which would become Hypnobrai. The former wouldn’t appear again until a much, much later season.

Another important moment in the season was the early introduction of Nya as more than just a female character. Nya very quickly took on the role of the mysterious Samurai X, a character who would help the ninja occasionally. Though the identity was kept secret for a time, eventually Nya revealed herself.

As with all seasons of NINJAGO, there had to be a collectable of some kind, to scatter across the sets. At first, it was the Serpentine Staffs, one for each tribe, whose venom would combine to reveal a path to the second collectable of the season.

One of the sets containing a Serpentine Staff went on to become a best-seller for the theme. 9445 Fangpyre Truck Ambush included a truck that had been transformed by the Fangpyre tribe into a living snake-headed form. Zane would have to battle for control of the staff using his own elemental vehicle, an icy snowmobile. In the provided pictures, a glimpse into how these early set photos were taken can be seen, with clear LEGO bricks holding up the tyres of the monstrous vehicle.

The second set of collectables for the season were much more influential. The Fang Blades acted as keys to the most malevolent beast in NINJAGO, the Great Devourer. The Great Devourer was a legendary snake, as large as a building that would only grow the more it consumed. With the help of Pythor P Chumsworth, the only surviving Anacondrai, the beast was released.

The Fang Blades were included in quite a few best-selling sets, including 9450 Epic Dragon Battle and 9449 Ultra Sonic Raider, both of which would see NINJAGO Legacy versions later down the line.

While attempting to stop the Serpentine’s plot, the backstory of some of the ninja was explored, with parents and other side characters revealed. Eventually, Lloyd saw the error of his ways, and was discovered to be the legendary green ninja, the one prophesied to fight a great evil, but it wouldn’t be enough for what was to come.

With the release of the Great Devourer and Lloyd turned to the side of good, the ninja had no choice but to team up with an old enemy, Lord Garmadon. The villain’s had been struck at a young age with a single bite from the beast, turning him into the vicious warlord that the ninja knew him as, and he was out for revenge.

Garmadon struck the final blow to the Great Devourer, showering NINJAGO City, a location that was only just introduced, in its remains. But at the end of the battle, Garmadon and the four golden weapons were nowhere to be found. The legendary battle of the green ninja was fast approaching.

The story would be continued further in its second season, so stay tuned for our third feature in the series exploring the next part of the story, or check out the first feature to catch up.