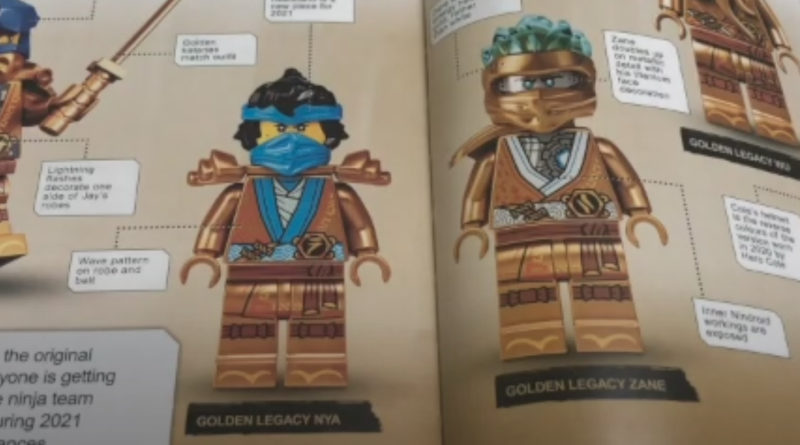 A LEGO NINJAGO book has revealed the first look at the upcoming Golden Legacy Nya and Zane minifigures, completing the collection of golden anniversary minifigures.

The majority of the LEGO NINJAGO Legacy sets for 2021 have included a special minifigure for each member of the ninja team wearing a golden version of a past season’s suit, all apart from two. Zane and Nya were curiously missing from the sets until Nya was found in a NINJAGO activity book. Now, the physical versions of these one-off character appearances have been revealed thanks to a Taiwanese retailer.

Eslite, a bookstore chain in Taiwan, was found stocking the newest edition of the NINJAGO Character Encylopedia, which was then shown on YouTube by The Lego Man. Thanks to this first look, the physical designs of both minifigures can be seen for the first time, with Zane’s suit featuring elements from the Season 11 sets. Meanwhile, Nya includes a brand new hair and headband piece, which might pair well with the rest of the team’s new hairpieces in the Season 14 sets.

There is no information on how fans will be able to get their hands on these two new minifigures. However, two more NINJAGO Legacy sets are on their way later this year, potentially meaning that the minifigures will be split amongst them.