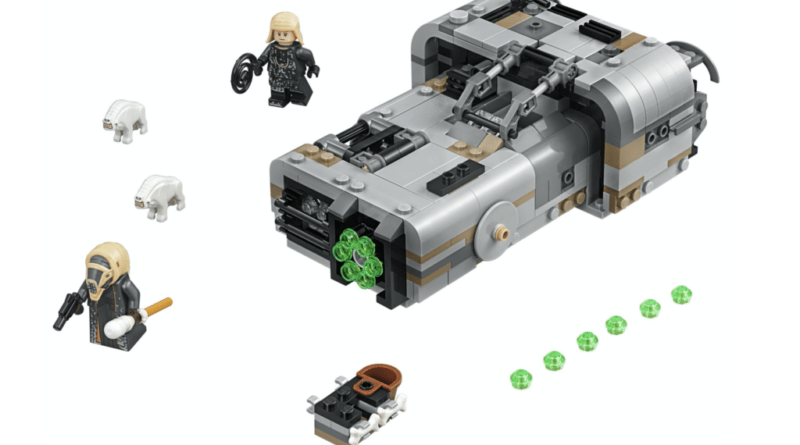 Flashbacks to the weak 75100 First Order Snowspeeder were prevalent, but fortunately 75210 Moloch’s Landspeeder does not make the same mistakes

LEGO Solo: A Star Wars Story’s 75210 Moloch’s Landspeeder has it all at first glance. It is a solid model built of sturdy construction. Filled with curves and other useful pieces in nothing but useful colors, 75210 is a parts pack worth having. Moloch’s namesake speeder has some cool functions which make it great for play, whilst two unique minifigures with exquisite detailing are included. Finally, and in some ways most impressively, it meets the magic price-per-piece ratio despite being a licensed set. On paper, this set is amazing, but, it still has an Achilles’ Heel – that price tag.

We do not yet know exactly who Moloch is, but if the name in and of itself does not scream bad guy the vehicle included in this set does. Distinguishing it from the many, many variants of speeder released through the years, Moloch’s has something unique about it: a distinct purpose. A small paddock in the front of the vehicle holds two Corellian hounds which can be released to hunt down pitiable prey, which is a very cool play function and really adds to the set. Paired with that is a generous rear compartment that opens to hold a pallet of food and bucket of water for the trainer to use. A mobile platform for deploying hunting animals in the Star Wars universe is something new and is imbued with a plethora of play possibilities. The cockpit of the speeder is also very appealing due to its open design.

Surrounding those features is a solidness of construction which is normally not found in a set this size. A generous inner skeleton is covered in a variety of somewhat rare curve elements all in various shades of grey. Such a cornucopia of useful parts makes 75210 Moloch’s Landspeeder an enviable parts pack. Indeed, nary a part is wasted and I would love to have 20 of these to liquidate for pieces, not to mention the pack of Corellian hounds one would end up with.

Alas this set has a major undoing in its price tag. Certain sets feel priced in light of the inevitable 25%-30% reductions which retailers such as Amazon slap on them. At £44.99 / €49.99 / $39.99, and in spite of the parts-per-piece ratio just hitting the traditional magic number, 75210 Moloch’s Landspeeder feels like such a set. Upon completing it and holding it fully assembled for the first time, my first thought was ‘is this it?’. Being so solidly built means the model is quite small. The vast majority of its 464 pieces are tiny so the part count is a bit deceptive. In short, it feels like this set should cost more in the £35 / $30 range, which it inevitably will do when on sale.

At the onset of this review I was wondering if Moloch’s Landspeeder would be the 75100 First Order Snowspeeder of the Solo line. I am pleased to say that it is emphatically not. This vehicle is an excellent build that has a variety of outstanding parts. Furthermore, the hunting dog conveyance aspect adds real play potential that distinguishes it from the veritable army of speeders which has come before. If you can find a way to get it on sale or stomach that launch price, you will not be disappointed with this offering.