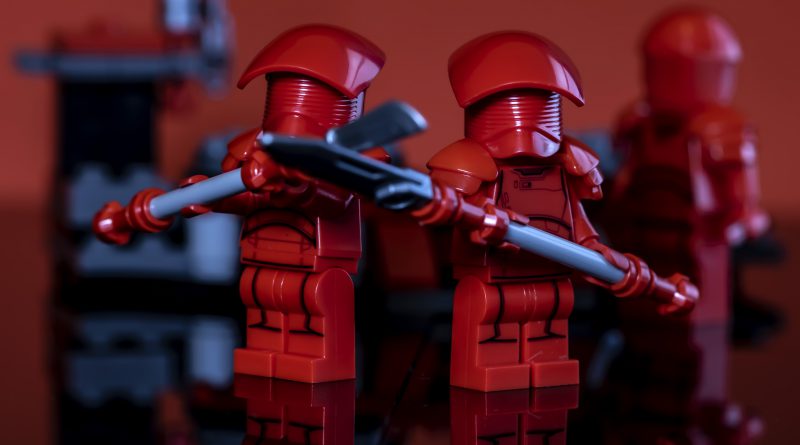 LEGO Star Wars 75225 Elite Praetorian Guard Battle Pack is about to let the past die, and provide a Battle Pack worth buying for both the build and the minifigures 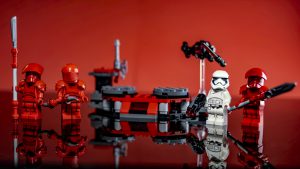 While Star Wars: The Last Jedi was an incredibly divisive film, most fans agreed that the scenes set within Snoke’s Throne Room displayed both beautiful cinematography and stunning art direction, particullarly the costume design of the Praetorian Guards. In the film there were three different types of guards and 75216 Snoke Throne Room (reviewed here) contained two identical guards. This latest battle pack gives fans an opportunity to add another variant to their collection.

Upon opening 75225 Elite Praetorian Guard Battle Pack, fans will be delighted to find an incredible array of parts and weaponry. Lightsaber hilts in red, harpoons, machetes and Bionicle swords all combine to form some pretty fierce looking weapons – a vibro-axe, electro-staff and twin vibro blade, for the Elite Guards to wield. Once placed in the guard’s hands it makes them look incredibly intimidating.

The Praetorian Guards themselves are absolutely stunning minifigures, certainly some of the best designed to ever be included in a humble battle pack. The Guard’s printing mimics their robes, starting on the torso and carrying on to the legs. The printing on the reverse of the torso is also excellent, nicely finished off with the moulded shoulder pieces and helmets, of which there are two designs. One of the two is new to this set.

In an ideal world, perhaps it would have been nice to have included at least one minifigure with the new skirt piece that was present in 75216 Snoke Throne Room, but the traditional legs offers more versatility in terms of play and posing.

Battle packs traditionally include four minifigures, and if 75225 Elite Praetorian Guard Battle Pack only included the three Praetorian Guards, fans would probably be satisfied as they are just so beautiful. There is a fourth minifigure in this set, a First Order Stormtrooper, whose printing is not new but also of high quality. The character comes with the obligatory stud shooter blaster.

Unlike most other battle packs, the build included feels coherent, logical and totally in universe, rather than a funky made up vehicle. Fans are treated to a small training platform for Snoke’s Guards to use to hone their skills, that might even lead older fans to feel a wash of nostalgia for the old ITV series Gladiators. The build is presented in the same red, grey and black colour scheme of 75216 Snoke Throne Room, which really ties these two sets together.

There is also a small weapon rack, complete with extra weapons and a training droid to construct, both of which are quick but nice to assemble.

Thanks to the minifigures and the well designed training platform this set looks absolutely amazing on display and how often can you say that about a battle pack? Most importantly this set offers a ton of play possibilities too.

75225 Elite Praetorian Guard Battle Pack ticks every box, bringing fans some of the most desirable Star Wars: The Last Jedi characters as minifigures at a low price point. This might go down over time as one of the best battle packs that the LEGO Group has ever produced. 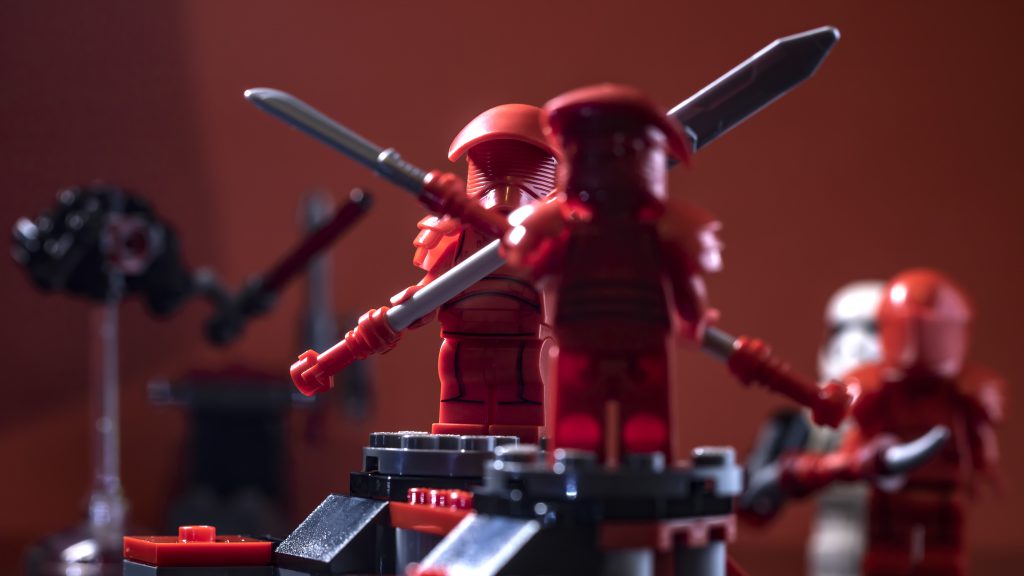