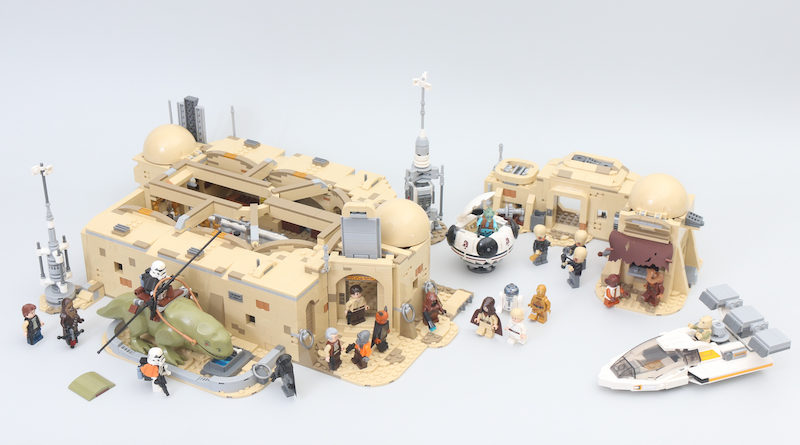 This isn’t the first time LEGO Star Wars has visited the wretched hive of scum and villainy that is Mos Eisley, nor the first venture into its infamous cantina, a location that packs as much story and character into its crammed four walls, as it does catchy music and scoundrels.

Just consider that the Mos Eisley cantina is where Luke Skywalker and Obi-Wan Kenobi first meet Han Solo and Chewbacca, it’s the location that saw Luke almost meet an early end before the first blink-and-you’ll-miss-it use of a lightsaber from Obi-Wan, it’s where Han and Greedo face off (in multiple ways across years of edits), and is where the classic ‘we don’t serve their kind here’ line directed at C-3PO and R2-D2 was uttered. And all that was soundtracked to Figrin D’an and the Modal Nodes’ Jazz-inspired tune (scored by John Williams) that has become a staple of the Star Wars zeitgeist.

With such an amount packed into the one location, with so many unusual background characters, detail and activity, Mos Eisley Cantina is a perfect candidate to be turned into a Master Builder Series LEGO Star Wars set.

The previous Master Builder Series set, 75222 Betrayal at Cloud City, was an equally large LEGO creation, but faltered in the more practical terms of its size and shape. A fantastic play and display creation, the huge dish-like build that it is has proven as impractical for display as the twice-as-priced UCS 75192 Millennium Falcon, perhaps more so, as at least the Falcon could be displayed on its side with a third-party stand.

That particular frustration with 75222 Betrayal at Cloud City has clearly been taken on board in the concept and realisation of 75290 Mos Eisley Cantina, as for this large location build you put together – for the centrepiece – a shell-like model that when closed up takes up a slightly more reasonable footprint, and just as crucially through its ability to open up wide still offers that same level of large-scale immersive display and play.

It’s a smart and relatively simple solution that gives the model that extra level of interactivity and practicality, without compromising on all the areas that otherwise make such a larger set so great.

With the extensive piece counts and higher budget that such sized sets as these in the Master Builder Series allow for, LEGO designers clearly have a lot of fun, and, just as there are any number of gigantic sets from recent years to serve as example to that, so too does 75290 Mos Eisley Cantina. For what you may recall from the cantina’s notable appearance on screen in Star Wars: A New Hope or that you may care to notice when rewatching it now, there are design points large and small that have been so wonderfully captured across this set.

As mentioned at the start, this isn’t the first time Mos Eisley Cantina has been built as a LEGO set, so there are moments within the construction process of 75290 that do feel familiar. Importantly, though, such previously trodden aspects – the bar, the seating, the entrance – are generally scaled up in such a way that there’s little to complain about, get bored by, and even less to fairly compare with what came before. Indeed, scale is quite obviously this set’s key selling point, and everything within the model is allowed to breathe as a result, from the amount of detail included, to the number of minifigures you can fit into any hideaway.

Additionally, building in predominantly one colour of LEGO can at times be deceptive, and that’s certainly case with 75290 Mos Eisley Cantina, for how detailed and involved the construction process for the set is. That it’s all in one colour and at such a scale presents a challenge to allow for enough of the detail to still shine through, across what could otherwise be a haze of tan. The designers employ a number of techniques and ideas to achieve that, and for the most part it works, even if not as fairly as their care would deserve. In short, it’s no less detailed in design or intuitive in technique than 75222 Betrayal at Cloud City, but, you have to look a little closer to fully appreciate that.

For instance, there are finer details to the construction of the cantina’s walls than appear at first glance, and in the fixtures and fittings that populate its interior, and even the clever way that there’s a directional, angled turn in interior archways is something you may only fully appreciate after putting it together, as it soon blends into the background. They all serve to add depth and story to the model, without any sense of over-building or wasted pieces, and in places – as explained as part of the instruction booklet’s various annotations –they even extend beyond what Star Wars fans have seen before in the cantina, across film, comics and concept art.

Meanwhile, the outbuildings and two vehicles that come in the set are nice inclusions that give the exterior to the main centrepiece as much activity and playability as the interior. These smaller builds add a further level to the final set-piece and turn what could have been a simpler singular model into a more than decent ensemble, fully immersed within the Mos Eisley setting.

If, as the LEGO Group does, you describe R2-D2 as a minifigure, then there is a grand total of 21 included in 75290 Mos Eisley Cantina, including a high number of first-time appearances, which for any LEGO Star Wars set is remarkable, let alone one based within the original trilogy which has otherwise been thoroughly mined by the LEGO team over the past 21 years.

Those first-time appearances most notably include Ponda Baba and Dr Evazan, who a naïve Luke Skywalker encounters at the cantina before Obi-Wan (and his lightsaber) intervenes. It has been a long wait for two of the galaxy’s most-wanted Star Wars characters, and the design for each does not disappoint, from the mould used for Ponda Baba’s walrus-like head to the skew appearance of Dr Evazan’s face.

There’s also, finally, a minifigure Garindan. The Imperial spy directs the Sandtroopers to Docking Bay 94 in their pursuit of Luke and Obi-Wan and, such is the detail captured to this character’s unusually-shaped head, you can almost hear that very particular way of communication emanating from his minifigure.

Such is the busy nature of the cantina when Luke and Obi-Wan walk in, there are plenty of Star Wars characters that the LEGO Star Wars design team could have chosen between to include and, whilst some omissions will be more notable for some Star Wars fans over others, the selection of debutants included – the Chadra-Fan species Kabe, the Ithorian Momaw Nadon, the Saurin (Bossk species) Hrchek Kal Fas and the devil-like Devaronian named Labria – bring excellent variety, colour and back-story to the wider brick-built scene.

It’s a collection of minifigures that also includes the familiar-looking Luke, Obi-Wan, Han Solo, Chewbacca, C-3PO, Greedo, R2-D2, Sandtroopers, Modal Nodes band and bartender Wuher. Whilst those with a wider LEGO Star Wars collection may be disappointed by this, each repeat character’s inclusion is important for the complete story that they allow to be told within the play and display value of 75290 Mos Eisley Cantina. Ultimately, the characters included are a mix between those that are new and those that are necessary, and is perhaps one trade-off for wider collectors to accept, for the sense of completion they give this set. If the 37th Luke Skywalker to add to your collection wasn’t included in 75290 Mos Eisley Cantina, you’d be just as disappointed, right?

Character selection is one thing, whilst scrutiny in design is quite another and, for the price that 75290 Mos Eisley Cantina comes in at, is slightly more merited. When you consider the version of Han Solo included in 75222 Betrayal at Cloud City, for instance, your mind may wander as to how a more detailed Greedo may have looked in this set, or a scruffier pair of banged-up droids, or a truer-designed Obi-Wan. With Obi-Wan, it’s also slightly baffling to not have a grey hair piece included. The hood is a relatively new and still interesting piece, but, Obi-Wan pulls it down as soon as he enters the cantina.

However, overall there’s plenty to appreciate in the 21-minifigure line-up offered within 75290 Mos Eisley Cantina and certainly enough to accept a few of the smaller compromises in design that have been made.

Any LEGO set priced beyond £200 really takes things to new levels, and at £319.99, 75290 Mos Eisley Cantina is well and truly in that territory. It’s a positive and a negative, as releasing sets at such stratospheric levels do make them harder to afford and to justify spending such amounts on. But, hand in hand with that – and due to the LEGO Group’s realisation of that very fact – is how much such sets deliver across all areas that every LEGO fan enjoys this hobby from.

75290 Mos Eisley Cantina offers several hours of immersive and fun building, a deep dive into an iconic location from Star Wars: A New Hope, a repertoire of Star Wars characters in minifigure form both new and necessary, and detail across an expansive piece count to offer numerous points of interest for display and points entry for play. Much like we said with 75978 Diagon Alley, 75290 Mos Eisley Cantina is indeed on another level when it comes to budget, but, for those lucky enough to be able to own the set, there will be no regrets, for everything that it delivers on.

This is a LEGO set that brings together the detail, characters and activity of its source material in such a way that not only faithfully recreates what it should do through a clever mix of playability and display, but that also skilfully captures part of that same essence that has made and continues to make the Mos Eisley Cantina such an iconic location within the Star Wars galaxy. This is a location that on film introduced classic characters, brought conflict, continued the chase and advanced the story, and everything that should reference those things is in 75290 Mos Eisley Cantina.

The cantina serves as a microcosm for the wider Star Wars galaxy that George Lucas created, packed with a weird variety of creatures each with stories of their own, set against the backdrop of an atmosphere and way of life intriguing, alien and yet somewhat familiar. A lot of what draws fans to Star Wars in turn draws them to the cantina and everything around that location’s appearance on film. For the faithfulness and realisation of design that the LEGO Group has achieved here then, the same goes for 75290 Mos Eisley Cantina – it’ll pull you in, and leave such an impression on you that you’ll not be the same again. And you’ll have that music stuck in your head for days after.