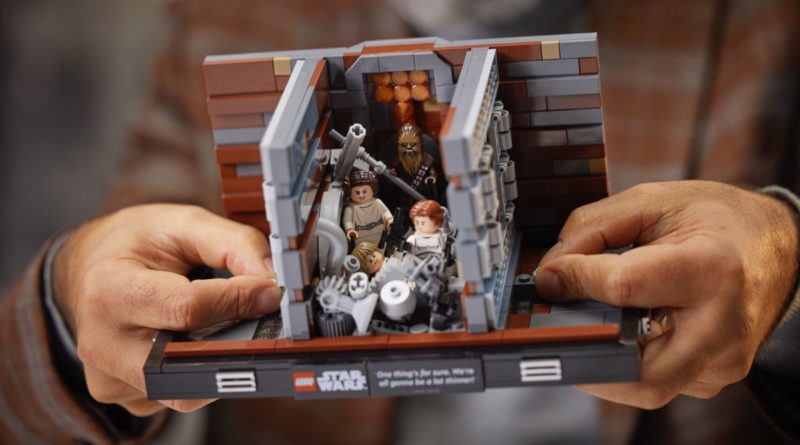 And – as rumoured – both of those droids feature brand new printing for this set, including arm printing for Threepio and back printing for Artoo. Han and Luke are also debuting a new Stormtrooper design, with an updated torso and white hips, matching the LEGO Group’s recent approach to Clone Trooper minifigures in its prequel trilogy sets.

75339 Death Star Trash Compactor is also the only one of the three new sets to include a bona fide play feature, in that its walls can compress together to simulate the compacting function of the on-screen scene. The printed tile that sits at the front of the display base appropriately features the iconic Han Solo line: “One thing’s for sure. We’re all gonna be a lot thinner!”

While the three human characters (and Chewie) are all situated within the compactor – the contents of which are very carefully aligned to allow the walls to slide together – you’ll find R2 and Threepio hiding out round the back, in an area designed to replicate the control room from which Artoo shuts down all the garbage mashers on the detention level.

Like the other two dioramas, 75339 Death Star Trash Compactor measures 15cm deep – or 20 studs – but varies in length, coming in at 21cm wide. According to LEGO Star Wars Creative Lead Jens Kronvold Frederiksen, all three of the sets are designed to match in depth, presenting a consistent style for this subtheme of builds.

You’ll be able to get your hands on 75329 Death Star Trench Run, 75330 Dagobah Jedi Training and 75339 Death Star Trash Compactor from LEGO.com and in LEGO Stores from April 26.