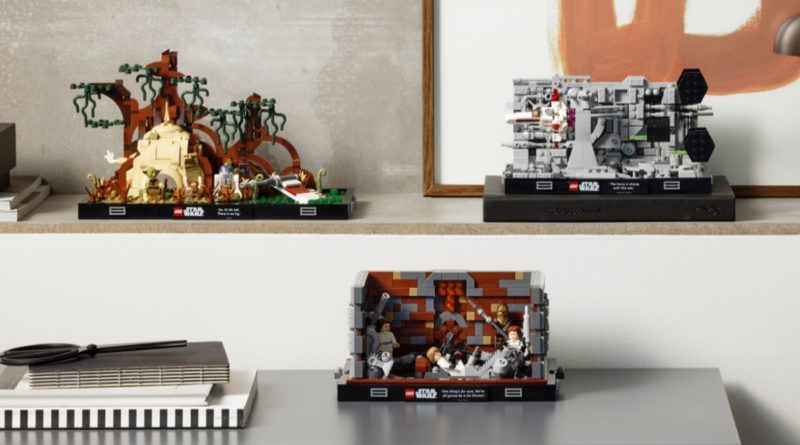 All three of the new LEGO Star Wars diorama sets are now live on LEGO.com, confirming their international prices and release date.

75329 Death Star Trench Run and 75330 Dagobah Jedi Training were both revealed slightly ahead of schedule by Amazon earlier this week, along with a handful of hi-res images and their UK and EU prices. We’ve now got more (and better) images of both of those sets, along with our first look at 75339 Death Star Trash Compactor.

Together, these three new 18+ sets represent a brand new direction for the LEGO Star Wars theme. They each sit on a black display base 20 studs deep – though vary in length and height – adorned with a tile printed with a quote from the specific Star Wars scene the set depicts. That template links them all together in a series, but they differ pretty wildly from set to set.

75329 Death Star Trench Run is a microscale model, for example, where the other two are both anchored around minifigures. 75339 Death Star Trash Compactor is the only set of the three to feature any functionality, meanwhile, with closing walls to recreate the on-screen moment our heroes nearly meet a grisly end aboard the Death Star.

Check out all the info on each of the three new sets below.

All three new LEGO Star Wars dioramas will launch on April 26, just in time for this year’s May the Fourth celebrations. Look out for our reviews next week, and take a closer look at 75339 Death Star Trash Compactor in the meantime by clicking here.