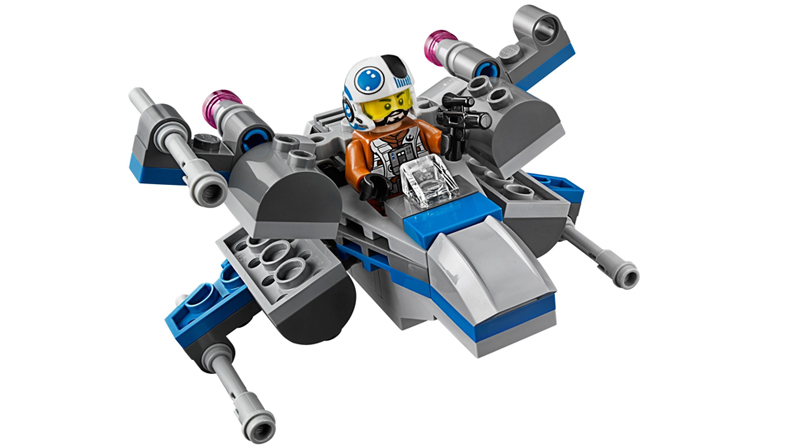 LEGO Star Wars Microfighters are the beloved comically-proportioned vehicles, with their snug cockpits that a minifigure can barely squeeze into and stud-shooters aplenty for imaginary battles around the galaxy.

Since flying onto shelves in 2014, the range has recreated nearly 40 iconic – and not so recognisable – Star Wars vehicles from across every part of the saga. From starfighters to speeders, and walkers to warships, Brick Fanatics chooses the best five so far…

Speeding along the icy wastelands of Hoth and bringing down Imperial forces, snowspeeders are an iconic part of The Empire Strikes Back, which is celebrating its 40th anniversary this year. They have literally been recreated at every scale possible in the brick, but what is particularly impressive about 75074 is that it packs so much detail into such a small model.

A LEGO lever piece imitates the rear tow-cable and transparent cheese-slopes make tiny windshields. Many Microfighters include unnamed background characters, making them perfect for army building, and all this Rogue Squadron pilot needs now is an AT-AT at the same scale to topple…

Han Solo may have flown the fastest hunk of junk in the galaxy, but ace Twi’lek pilot Hera Syndulla had the quietest – The Ghost. 75127 The Ghost is only the second iteration of this colourful freighter from the Rebels animated television series, which uses an ingenious array of parts to capture its unique octagonal-like shape.

Not only is it a fantastic looking model though, it’s also the cheapest way of getting the incredibly detailed minifigure of Hera, complete with printed green lekku (that’s her head-tails for anyone wondering) and orange flight-suit.

No list of best LEGO Star Wars ships, however small, would be complete without the Millennium Falcon. Han’s beloved ship holds many accolades and up until 75263 Resistance Y-Wing in 2019 it held the record for being the only one to appear in this range twice.

What makes 75193 better than its predecessor? One it uses light grey bricks rather than dark grey, which is more screen-accurate, but it also has a lot more greebling that better represents the pieced-together feel of the ship. 75193 perfectly demonstrates how much a LEGO model can improve in only four years by the introduction of new pieces.

During the dramatic conflict as the Resistance desperately try to flee their base on D’Qar, Kylo Ren engages them in battle from the cockpit of his deadly TIE Silencer. 75196 A-Wing vs. TIE Silencer is notable for introducing Microfighter double-packs in 2018. Two fighters plus two instruction booklets equals double the fun.

Not only is this dogfight-in-a-box concept brilliant, but 75196 also comes with a unique minifigure of Resistance pilot Tallisan Lintra. Yes, she may be a background character with only a few lines, but LEGO Star Wars fans love collecting all of the denizens of the galaxy – no matter how obscure.

“The sand-people always ride in single-file to hide their numbers”, explained Obi-Wan Kenobi to Luke Skywalker in Episode IV: A New Hope. Whether they took on T-16 Skyhoppers is another matter entirely, and 75265 definitely uses some creative license. The result though is the first ever LEGO Bantha, which looks absolutely amazing, and using Wampa-tusks for its horns is a clever touch. Hopefully these hairy beasts will turn up in more Tatooine-based Star Wars sets. A nostalgic inclusion for many fans, the T-16 Skyhopper could even be Luke Skywalker’s as the pilot remains ambiguous behind that helmet visor.

Although they are meant for being swooshed around a living-room, Microfighters appeal to LEGO Star Wars fans of all ages. They are a budget-friendly way of collecting particular minifigures, and for creating starship fleets without worrying about converting the dining room table into a hangar bay. New ships are being designed all the time for the Star Wars universe, so this is a range that will always have fresh co-ordinates to punch into the navicomputer.