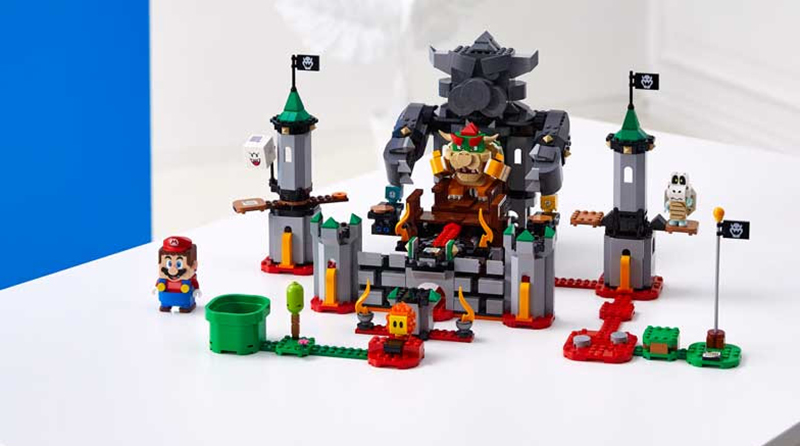 Selected Nintendo focused websites have received information from the LEGO Group, including GoNintendo, on the new LEGO Super Mario theme. What looks to be the largest set in the launch wave, 71369 Bowser’s Castle Boss Battle Expansion Set, will be released on August 1 at a price of $99.99.

As with every set in the theme, it will require 71360 Adventures with Mario Starter Course, also revealed today, in order for the game aspect to work. The Mario figure collects virtual coins as he is moved from the Start Pipe to the Goal Pole via LEGO bricks.

71369 Bowser’s Castle Boss Battle Expansion Set involves building a huge grey stone version of the villain as well as the character himself, with this presumably offering players the most challenging level of the LEGO-based game.

“We were thrilled to see the global reaction to news of LEGO Super Mario,” says Jonathan Bennink, LEGO Digital Design Lead on LEGO Super Mario. “Fans have been keen to learn more, so I am pleased that today we were able to reveal more details about this exciting new collaboration that has led to a reimagination of the LEGO building experience and an entirely new way to play inspired by the beloved video game icon, Super Mario. We can’t wait to see fans get creative and challenge each other with this highly engaging and social play experience.”