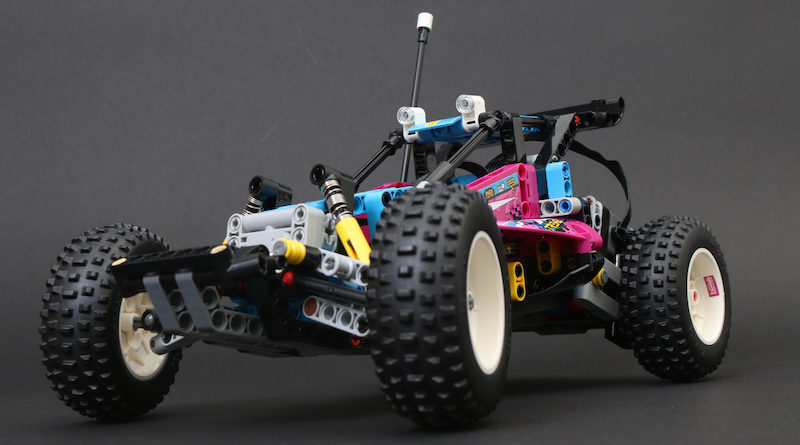 Costly but incredibly fun, durable and colourful, 42124 Off-Road Buggy is the latest in a long line of awesome app-controlled LEGO Technic sets.

One thing LEGO Technic shines for is its design of app-controlled vehicles. Where traditional LEGO System sets may be more susceptible to wear and tear or compromise aesthetics for a tougher exterior (see 76112 App-Controlled Batmobile), Technic can offer style, colour, shape and toughness to a format that seems to perfectly fit its capabilities as a building platform.

42124 Off-Road Buggy is the latest in an increasingly long line of such models, continuing with traditional wheeled app-controlled fun of recent releases 42109 App-Controlled Top Gear Rally Car and 42099 4×4 X-Treme Off-Roader, and settling somewhere between those two in design.

As is the case with any of the remote or app-controlled vehicles released by the LEGO Group, including the required electrical parts to power 42124 Off-Road Buggy and have it wirelessly communicate with the Control+ app means that for the price, you receive far fewer pieces than you would ordinarily in a LEGO or Technic set. Indeed, for £119.99 / $129.99, a build of 374 pieces does not feel on the face of things like suitable value.

However, the electrical parts that turn a model into an app-controlled, drivable vehicle don’t come cheap, and given they are available separately, you can measure the comparative value of 42124 Off-Road Buggy. Inside the Technic set you’ll receive 88012 LEGO Powered Up Technic Hub, which is available individually for £74.99, and two 88013 LEGO Powered Up Technic Large Motors, which are available individually for £29.99 each. Coming in at a combined cost of £134.97, 42124 Off-Road Buggy’s value is better understood.

It’s important to take that into consideration, particularly given how quickly a more experienced LEGO fan will build 42124 Off-Road Buggy (about half an hour). In spite of that and the relatively few pieces required to put it together, the completed model is as rigid as any Technic set, and sizeable to the point of being 28cm long and 16cm wide (the LEGO Group also says it’s 19cm tall, but that’s including the antenna, so take 5-6cm off that).

The lighter piece count (compared with 2020’s 42109 App-Controlled Top Gear Rally Car and 2019’s 42099 4×4 X-Treme Off-Roader) and the choice of vehicle here means that both motors and hub are integrated cleverly, but not to the point that they aren’t exposed.

That’s a practical consideration for those aiming this thing through puddles and shallow rivers – maybe don’t. In terms of aesthetics, it takes nothing away from a design that perfectly captures the fun and vitality of older remote-controlled buggies, with a vibrant colour scheme across an angular frame that’s sat between four gigantic, durable tyres and a suspension that looks ready for something significant. All of that is then angled forward for – as the LEGO Group suggests – the performance of some ‘amazing tricks’.

Those tricks are based around a relatively bouncy suspension and set of rubber wheel tyres, which just absorb any impacts when driving the vehicle around using the Control+ app. The controls on the app include a left-hand joystick for acceleration in any direction, and a right-hand brake (there are also a selection of sound effects, but these feel unnecessary and rather junior).

As a combination, the joystick and brake are simple but intuitive to pick up and get going with. Part of why is in how tight and responsive the controls are to your inputs on your mobile device. Steering and acceleration reacts instantly to your movement, and the brake is effective in dead-stopping the buggy at any moment. Working together, they offer a real sense of both accessible control and fun to 42124 Off-Road Buggy.

The ‘off-road’ element to the car is in how those large, off-road-style tyres easily climb up low-lying objects or ramps you may have in the house – any step of an inch or so proves too much, but anything below is immediately adopted into the obstacle course.

Everything here makes for an inviting first impression of driving the vehicle and a rewarding experience each time you dare to drive a bit faster, try to skid the rear end or attempt to brake closer to an edge. Whether this is your first app-controlled car or your 10th, there’s a lot of potential to be explored in how to drive and race this thing (the app also includes a race function, challenges and rewards amongst other features).

This is not a set with minifigures in it, nor would it be. Move along.

When you pick up an app-controlled Technic set, expect to pay well into three figures, simply for the motors and control hub required to power the model. For whatever you do pay, which in the case of 42124 Off-Road Buggy is £119.99 / $129.99, you not only get good parts-value for money, but you get a wonderfully-designed app-controlled vehicle, with an evocative style to it and all the capabilities a traditional remote-controlled toy car would have.

Such is the way it is designed in colour, shape and angle, you can’t build 42124 Off-Road Buggy and not want to race it around and try out all its capabilities for tricks. It looks durable, springy, fast and full of action, and when powered by the Control+ app, it performs in exactly the same way.

App-controlled vehicles are not cheap and consideration to the budget is important when picking up something like this. In comparison to buying the hub and motors separately, then, 42124 Off-Road Buggy offers immediate, clear value. And then, once the Technic set is built, six AA batteries (bought separately) are put in and it’s whirring around the house in combat with the cat, there’s no glancing at the receipt. This is absorbing fun, dynamic play and a great-looking model to build. Cheaper than the last two most comparable app-controlled Technic vehicles to have come out, 42124 Off-Road Buggy may not have as many of the functions, but is easily more immediately enjoyable, as it has been designed to be.

42124 Off-Road Buggy is available at LEGO.com from January 1, 2021 – support the work that Brick Fanatics does by purchasing your LEGO through one of our affiliate links.