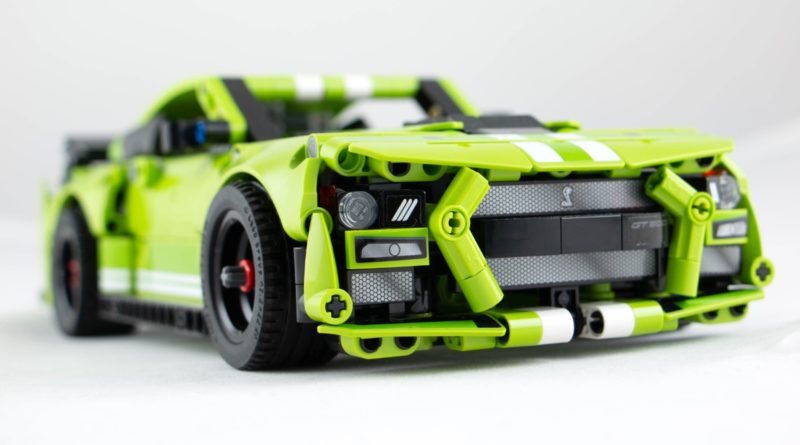 Many will recall playing with wind-up toy cars when they were small. Press the car firmly against the floor, pull it back, feel the friction motor winding up, and then let it go. Like us, you probably hadn’t thought about those sort of toys for years, until back in 2013, when the LEGO Group introduced a pull-back motor into a couple of small, sub-£20 Technic sets.

Every year since then, there have usually been a pair of Technic vehicles released that use this motor which can be built separately or, after downloading some additional instructions, be combined into a larger model. They’ve always been generic sorts of cars: a getaway racer, a race car, a quad bike, that sort of thing, until earlier in 2021 when the LEGO Group went licensed with 42118 Monster Jam Grave Digger and 42119 Monster Jam Max-D.

Now we’ve got two more ‘real’ cars recreated in LEGO and using the pull-back motor, but this time they’re larger and more detailed than the sets that have come before. 42137 Formula E Porsche Electric is based on a sleek racer that can reach more than 170mph in near silence. And then there’s 42138 Ford Mustang Shelby GT500, which is based on a car that’s anything but quiet! A 760HP, V8, 180mph monster, it’s the most powerful road car that Ford has ever built.

It’s the very definition of ‘muscle car’, so how does its LEGO Technic counterpart stack up?

Experienced Technic builders will breeze through 42138 Ford Mustang Shelby GT500, but for those new to the world of beams, pins and axles it’s a nice introduction without the head scratching that can sometimes accompany more complex builds.

A solid chassis soon has not one but two of the pull-back motors attached, both driving the rear wheels. A minimalist interior follows, consisting of not much more than a steering wheel, a couple of seats and a rudimentary roll cage. Along the way, a lever assembly is constructed, the purpose of which is not immediately obvious. And then on to the bodywork, which is rendered in the same eye-searing green that was seen on last year’s magnificent 42115 Lamborghini Sián FKP 37.

The green is broken up with a couple of white racing stripes that are partially brick-built, but mostly rendered by stickers, of which there are many. Looking at the set though, you’d be hard-pressed to spot the 30 stickers, as many of them are tiny badges, grilles and so on. When it comes to the large stickers on the roof, and those that make up the stripes on the nose, you’ll want to take your time.

Where automotive exotica from the likes of McLaren, Ferrari and Porsche are usually one sweeping curve after another, muscle cars tend to be a little more agricultural in appearance, and as such, the straight lines of LEGO do a pretty good job of replicating the bruising looks of the Mustang, particularly from the doors on back.

The low, curving roof sitting over pumped up rear arches and leading in to a hefty spoiler all look terrific. Face on, the designer has also done a great job of recreating the quite frankly evil-looking ‘face’ of the car. It looks just like its frowning, snarling real-world counterpart. The only slight shortcoming is the front wings, which are unfortunately ruler-flat and lack the subtle curve of the real thing.

So all in all, pretty good, right?

Well, not quite. Remember that lever inside the body of the car? The Porsche has one too, and in both cases it acts as a ratchet so you can wind the car up, and instead of flying away, it’ll sit there until you activate the lever. In the case of the Porsche, it’s neatly integrated with the bodywork of the car. With the Mustang it’s a far more clumsy affair. Near the end of construction, you build a simple lever that sticks out of the back of the car in a fairly ugly manner. Then a few steps later, you take it off and finish building the back of the car.

So if you actually want to use the car’s party trick, you have to remove part of the tailgate and plug the lever back in. It’s disappointing, particularly given how well the function was integrated into the Porsche. It’s a minor niggle, having to choose between ‘race mode’ and ‘display mode’, but a niggle nevertheless.

The ability for a flying start isn’t the Mustang’s only trick, though – a flash on the corner of the box tells us that it also has an augmented reality experience. Unfortunately the app hasn’t been made available yet, so we can’t tell you what that will bring to the party, and the instruction booklet isn’t giving much away. As soon as we’ve had a chance to check it out, we’ll report back.

Nope. Nothing to see here.

The problem is that buyers will look at 42138 Ford Mustang Shelby GT500, look at the asking price of £44.99 and probably think to themselves that there is better value to be found elsewhere. Technic fans won’t want to spend that much on a set with very little traditional Technic functionality. Meanwhile, newcomers to the theme may well compare the Mustang with something like 42118 Monster Jam Grave Digger and realise that they can get 90% of the fun for 40% of the money. Chances are you’ll be able to find this at a reduced price before too long, but at full price this is likely to be for Technic completists and Muscle Car fans only.

42138 Ford Mustang Shelby GT500 and its sister set 42137 Formula E Porsche 99X Electric are seemingly designed to appeal to younger Technic fans, or to entice builders who may not have been bitten by the Technic bug yet.

It’s a fairly simple build, has built in battery-free fun with those pull-back motors and, when the racing’s over, looks good enough to display. It might not be as pretty as some of the Creator vehicles, but you can’t send them charging across the floor. These two will probably be the first of many of this type of build.

How long does it take to build LEGO Technic 42138 Ford Mustang Shelby GT500?

It takes around two hours to build the Mustang – quicker if you’re not too worried about stickers going on straight!

How many pieces are in LEGO Technic 42138 Ford Mustang Shelby GT500?

There are 543 pieces included in the set, as well as a sticker sheet with 30 stickers on it.

It measures 27cm long and 12cm wide, and just over 8cm tall.