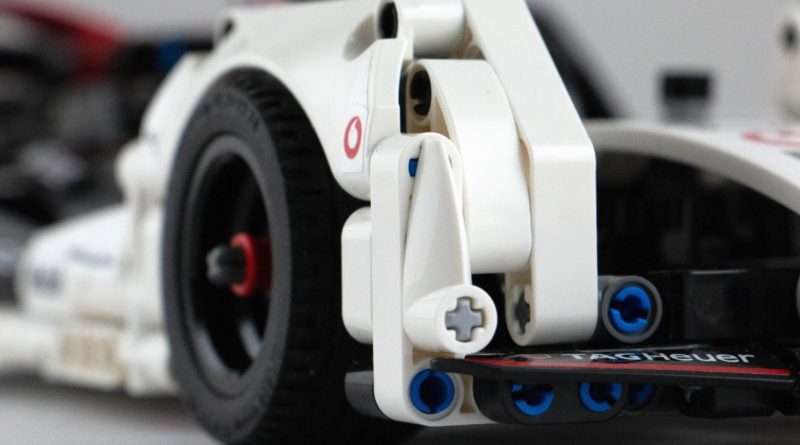 In the extended household that is LEGO, many look upon Technic as the slightly dotty aunt that no-one wants to sit next to at Christmas. Of course she’s family, but she’s a bit… odd. So it is that Technic sets tend to be something of a niche purchase compared to the all-conquering ‘regular’ LEGO sets.

They’re usually fiddly to assemble, and their looks can be divisive – all of which means that when a younger LEGO fan is looking to spend their (or someone else’s) hard-earned money, Technic is rarely at the top of the list.

Then a few years ago, the LEGO Group introduced the pull-back motor. It has appeared in 19 sets up until now, all but one of which have been in the almost-impulse-purchase region of below £20. The sets were small, fun and simple to build. And with the addition of the motor they had immediate play value that didn’t rely on batteries.

Now we’ve just got two new, larger sets using the same motor – or motors, rather, because both 42138 Ford Mustang Shelby GT500 and 42137 Formula E Porsche 99X Electric have two of them under the hood. They also have stickers. Lots of stickers…

Here we’re going to take a look at the Porsche. It looks like a cross between a Formula 1 car and an LMP1 racer – low, light and aerodynamic. It also looks like it’s doing 200mph when it’s standing still. Modelling slippery racing lines out of the blocky medium of LEGO will have been a challenge for the designer. How did they get on?

For a Technic set 42137 Formula E Porsche 99X Electric is a straightforward build. A long, narrow structure acts as a spine, with the two motors at the back to drive the rear wheels, then the bodywork is built up around it. Given the angular nature of Technic, the designer has, for the most part, done an excellent job in recreating the flowing lines of a car, which presumably has a huge impact on aerodynamics.

The back of the instruction booklet has pictures of the actual Porsche and its LEGO sibling, and with the exception of the front wings – which look chunky and awkward compared to the sleek, slippery original – the majority of the vehicle is a fine representation of the real thing.

How much you’ll enjoy the build depends on your feelings towards stickers. If you’re a ‘just whack them on’ sort of builder, or even the ‘I don’t bother with stickers’ type, then you’ll be fine. If, however, you’re the sort that sits there with the sticker on the tip of a knife blade, holding your breath to try and get it lined up just right, then this might just grind your gears.

To be fair, the stickers in the set we put together didn’t suffer from the ‘static cling’ that some sticker sheets have, where they leap onto the plastic as soon as they are brought within six inches of it. As a result they all went on straight, and they definitely enhance the look of the finished model.

At first glance, the Porsche doesn’t have any of the functionality that we’d normally associate with a Technic set – no steering, for example – but given that it’s designed to go racing across the floor, that’s probably no bad thing. That said, it does have one neat trick buried inside it.

Early on in the build, right in the heart of the model, you construct what can best be described as a lever assembly. Later, this attaches to the tail fin of the car, which, for an as-yet-unexplained reason, can move up and down. It’s only once the build is complete and you flip the manual over to the final page that the mystery is solved, as there’s an illustration of the car, and a foot seemingly stepping on the back of it.

The lever you have built is a simple ratchet that allows you to pull the car back, and thus wind the motor up, without it immediately flying off. It’s only when you press down on the tail fin that the ratchet is released and the Porsche goes sailing across the living room floor, scaring the cat.

The finished model is surprisingly robust. With no bits of aero hanging on by a single stud, this set is built to withstand crashes into walls, furniture and so on without requiring a pit stop for repairs every time.

There are no minifigures included in Technic sets. If it’s characters you’re after, look elsewhere.

42137 Formula E Porsche 99X Electric is an attractive set to display – not up with the Creator sets, but pretty good. And it undoubtedly has some play value, but unless the Augmented Reality Experience turns out to be a game-changer, then £44.99 seems steep for such limited functionality. It feels like a £35 set that’s trying to punch above its weight, and as such it’s difficult to recommend. If it appeals to you, then wait for the inevitable price drop before pulling the trigger.

The hardcore Technic fan is looking for functionality, and lots of it. Working engines and gearboxes. Functioning suspension and steering. Pneumatics. Power Functions. CONTROL+. Okay, maybe not CONTROL+. For those individuals, 42137 Formula E Porsche 99X Electric won’t hold much interest as, beyond the pull-back motors, it doesn’t have much that could be described as a function.

But for someone dipping their toe into the Technic pond for the first time, or looking to move up from the pocket money sets, this could be just the ticket – and its value is helped greatly by its ingenious ‘starter button’ for the motor, which has pushed beyond our expectations at this level.

One extra function, if we can call it that, that the set does have is an augmented-reality experience. What that entails we don’t know as unfortunately at the time of writing, the app was unavailable to us. We will report back when we’ve had a chance to try it out though.

So, in conclusion, it’s a set that tries to look good enough to be a display model and tries to be enough fun for the young at heart to enjoy playing with, and does a pretty good job of both. Sure, it’s not as gorgeous as something like 10265 Ford Mustang (few sets are), but then you can’t race that across the living room.

If you were looking at this set and its sister set, 42138 Ford Mustang Shelby GT500, and only wanted one, this is the one to aim for. Find out why in our review of the GT500.

There are four numbered bags, two pull-back motors and a set of wheels, all of which takes around one and a half hours to build – half an hour of which is applying all those stickers!

How many pieces are in LEGO Technic 42137 Formula E Porsche 99X Electric?

There are 421 pieces included in 42137 Formula E Porsche 99X Electric as well as a sticker sheet with 31 stickers on it.