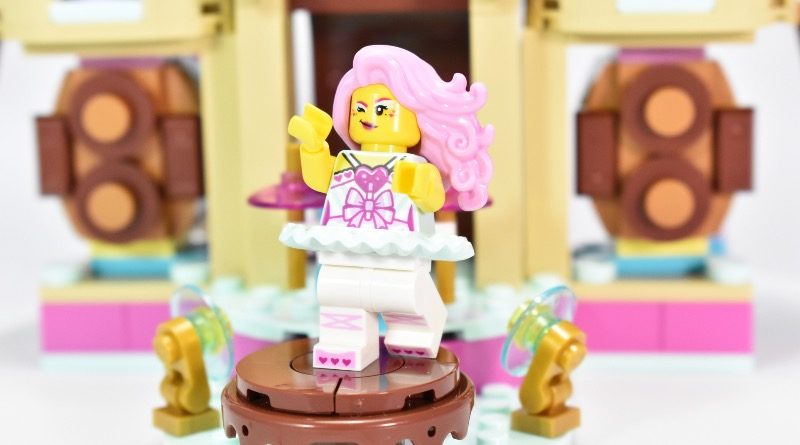 The initial wave of LEGO VIDIYO sets, which consisted entirely of blind-boxed Bandmates and poor value BeatBoxes, fell flat with many fans – but the augmented-reality theme seems like it’s here to stay with a fresh batch of larger sets, which will hopefully offer the build experience that was missing from that launch line-up.

43111 Candy Castle Stage comes in at the cheaper end of the new wave, but still offers a decent piece count to work with. The question now is: can it put those parts to good use in a way that will make this musical model appealing independently of its accompanying app?

43111 Candy Castle Stage has a distinct gingerbread vibe, with enough chocolate and ice cream to put you into sugar overload. From the bubble-gum ice cream on either side to the chocolate fountain on the back, this build is the definition of a candy castle.

Compared to the rest of the second LEGO VIDIYO wave, which mostly employs bright neon tones across the likes of 43113 K-Pawp Concert or 43115 The Boombox, this model adopts its own unique colour palette. And in doing so, it strikes a much better balance between packing in bright, vivid hues without overwhelming your senses. The brown of the gingerbread and chocolate slices through the pink, purple and blue, making this a refreshing build to feast your eyes on.

As with most of the VIDIYO sets – even at these higher price points – the building process is relatively straightforward, with few particularly inventive techniques to speak of. A large degree of repetition plagues its brief construction, however, as the build is almost entirely symmetrical.

Thankfully, VIDIYO’s eschewing of stickers continues with 43111 Candy Castle Stage – and while there aren’t many printed pieces either, they don’t really feel missed, with the build communicating just enough detail through bricks alone.

You’ll find even more detail around the back of the build, including a cupcake and dressing table. The lack of available studs on which to place the minifigures makes this area feel pretty cramped, though – a second plate for the base would have served it well.

Following in the footsteps of several over sets from this second wave of VIDIYO sets – including 43112 Robo HipHop Car and 43114 Punk Pirate Ship – there’s a rotating, double-sided head sat atop the castle wall, with a gingerbread-esque face on one side and a yellow bear on the other. And there’s also a BeatBox-style base on which to display 12 of the 16 included BeatBits – or 2×2 printed tiles – though you’ll need an actual BeatBox case for somewhere to store the rest.

While 43111 Candy Castle Stage offers a relatively simple build with few play features, the very nature of the model means there’s far more to this than the first wave of VIDIYO BeatBoxes and Bandmates, which relied almost entirely on the accompanying app for any kind of play experience.

43111 Candy Castle Stage contains just two minifigures, Candy and Blue-Beary. These minifigures are both original and contain exciting new elements, such as Candy’s hair piece – which looks like it’s been caught in the wind – and Blue-Beary’s trans-blue legs. Fingers crossed these new elements are used elsewhere to create even more interesting minifigures…

43111 Candy Castle Stage is priced at £24.99 in the UK, $29.99 in the US and €29.99 in Europe. This is a fair price for what is included in the set – particularly next to VIDIYO’s BeatBoxes, which retail for only £8 / $10 / €10 less – as there’s actually some semblance of a build here, even if it is pretty small. Throw in two exclusive minifigures with interesting printing and new pieces, and you can’t really complain at full price.

While 43111 Candy Castle Stage isn’t going to blow anyone away, a charming finished model that stands out against VIDIYO’s neon-tinted range and two very attractive minifigures should help it to find a home among fans – even those who may have been put off by the theme’s initial line-up of expensive BeatBoxes.

How long does it take to build LEGO VIDIYO 43111 Candy Castle Stage?

43111 Candy Castle Stage takes around 30 minutes to construct. Its 344 pieces are split across three numbered bags.

How many pieces are in LEGO VIDIYO 43111 Candy Castle Stage?

43111 Candy Castle Stage consists of 344 pieces. A total of two minifigures are included, Candy and Blue-Beary, who are arguably the highlights of this set.

43111 Candy Castle Stage measures 13cm tall, 14cm in length and 17cm wide. It’s pretty small-going, but then this is one of the cheaper VIDIYO sets to actually offer a building experience.

How much does LEGO VIDIYO 43111 Candy Castle Stage cost?