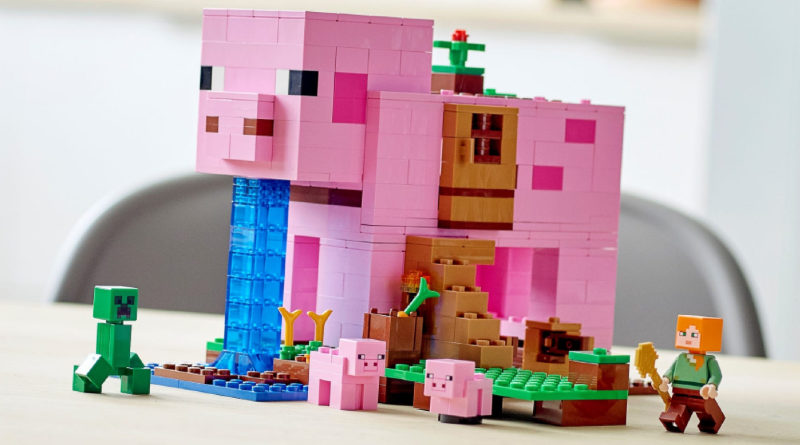 Two new LEGO Minecraft sets have appeared on LEGO.com, bringing the Minecraft pig to life at its largest scale yet.

21170 The Pig House and 21164 The Coral Reef have been added to LEGO.com, giving LEGO Minecraft fans a peek at the newest entries to the theme. One set brings an entirely new location and the other is a huge Minecraft pig, just another day in LEGO Minecraft.

The main build of 21170 is a house in the shape of a giant Minecraft pig. The exterior of the abode is almost entirely pink, matching the design of the titular animal. Inside is everything a player needs to survive, a furnace, crafting table, bed, library, and interior waterfall, just the basics of course.

Beneath the house is a pen for some non-house pigs and a pool of water pouring from the house’s mouth. Play features of the set include an exploding function to knock down the house at its hind legs. A few characters populate the set with Alex holding a golden shovel, two pigs and a creeper to detonate the house.

21170 The Pig House joins the rest of the LEGO Minecraft sets releasing in 2021 and comes in at £44.99. 21164 The Coral Reef will also launch, and explores the underwater biome of the same name. 21164 The Coral Reef includes two pufferfish, Alex wearing a turtle shell helmet and a drowned minifigure all for £8.99.