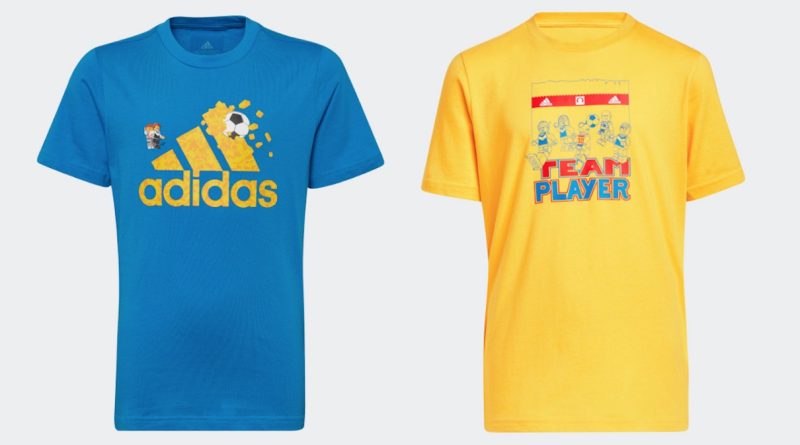 A number of brand-new graphic T-shirt designs have recently been added to the ever-expanding LEGO x Adidas collection.

Following the release of two all-new shoe designs and a series of workshops to customise mini trainers as part of the LEGO Group’s 90th anniversary celebrations, Adidas has now debuted a selection of football-themed T-shirts.

Aimed at adults, the three new designs combine both company’s logos with LEGO minifigure and brick elements. The T-shirts are available to order now via the Adidas website, in multiple sizes and colours priced at £28.

One of the designs features a football smashing into a brick-built LEGO logo, with two minifigures off to the side. The T-shirt is available in white, bright blue or red, depending on your personal preferences. The second style only arrives in a carbon colour scheme, with LEGO graphics and a large brick-built number ‘9’ on the back of the shirt.

A third design continues the football numbering theme with a ’10’ on the front and reverse of the white Tee, alongside a minifigure head silhouette and both the LEGO and Adidas logos on the chest. Finally, there’s one design for kids that lets younger fans show how much of a team player they are with a T-shirt featuring a group of minifigure players having a kickabout on the front. You can pick up the latter Tee priced at just £20 in either white or yellow.

The full LEGO x Adidas collection currently includes all sorts of items such as trainers, hoodies, backpacks, shorts, socks and much more.